Pay attention to your father. Yes of course I mean listen to what he says. But more importantly, carefully observe what he does. You’ll learn, probably at a very young age, that people don’t always do what they say. You’ll learn that talk can often be cheap if actions don’t back it up. 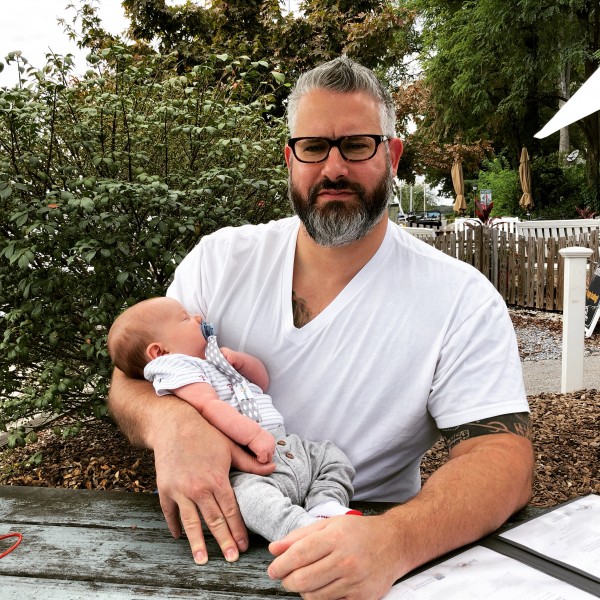 See how he clears the dinner plates and loads the dishwasher without being asked? Do you know why he does that? Because he lives here too. Because I made dinner, and he ate it. It’s not a favor to me or to you. It’s just what Dad does.

Hey, where did Dad go, you wonder, as we play with your blocks. Hear that sound coming from upstairs? He’s running your bath. He’s carefully making sure the temperature is warm enough for you, but not the scalding hot that I prefer when I occasionally get in the tub. He’s dumping your bath toys in the bubbles and picking out your pajamas. He’s filling the humidifier with water and testing out your ceiling light that will project stars and moons while you drift off to sleep. It’s pretty cool that he does that, right? He doesn’t get a badge for it though, nor has he ever sought one. It’s just what your Dad does. 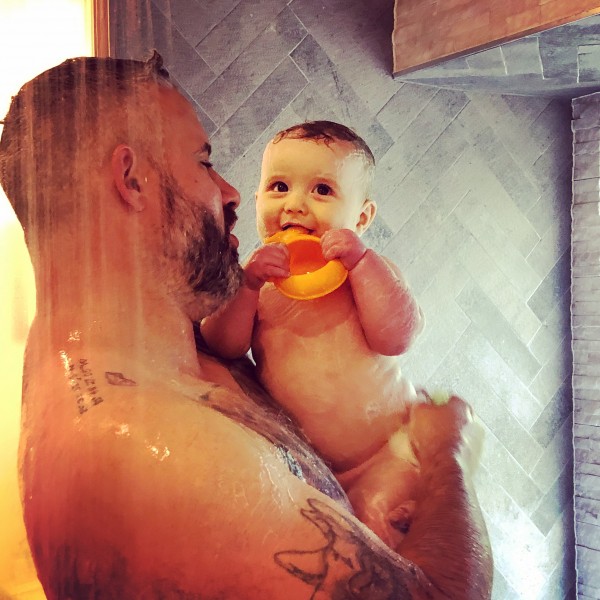 Here comes the delivery man again! What’s in that box? It looks like the next shipment of the formula that Dad carefully researched when I couldn’t produce enough breastmilk in those first deliriously exhausting weeks of your life. I vaguely remember the spreadsheets and charts Dad made to compare and contrast formulas, both domestic and European. He took the lead and not only ordered the first shipment, but tracks when we run low to place new orders. To be honest, I wouldn’t even know where to turn if he weren’t here and I needed to order more. Sure, I’d figure it out. But this is really Dad’s department, because this is what he does.

Do you remember your first Navy football game? Of course not, because you were 10 weeks old and slept through the whole thing. Except of course when it was time to eat. There’s your Dad, sitting in the end zone, cheering for Navy’s touchdown while shaking up a bottle for you. He didn’t pass you to me, and he didn’t stop yelling. He cradled you and fed you when it was time. If he noticed the confused looks on peoples’ faces at what they were witnessing, he didn’t let on. It was time for you to eat, and he fed you. Because that is what Dad does. 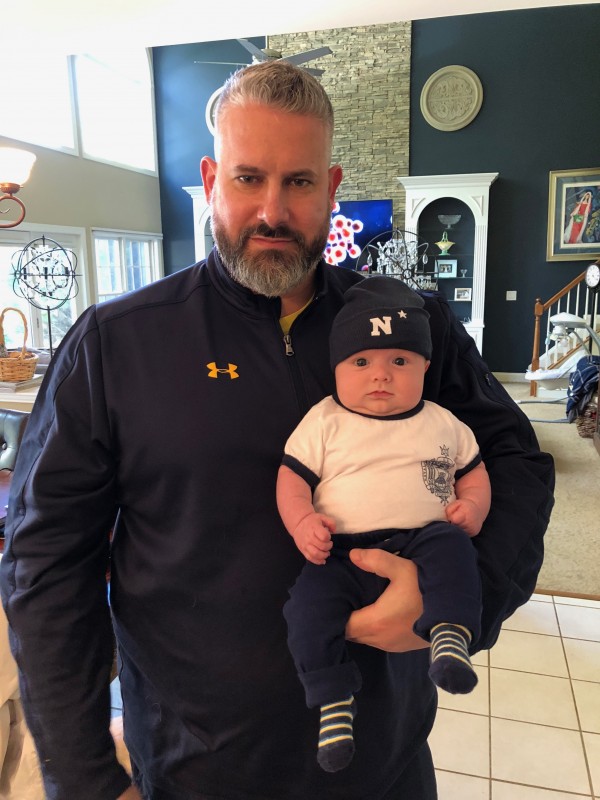 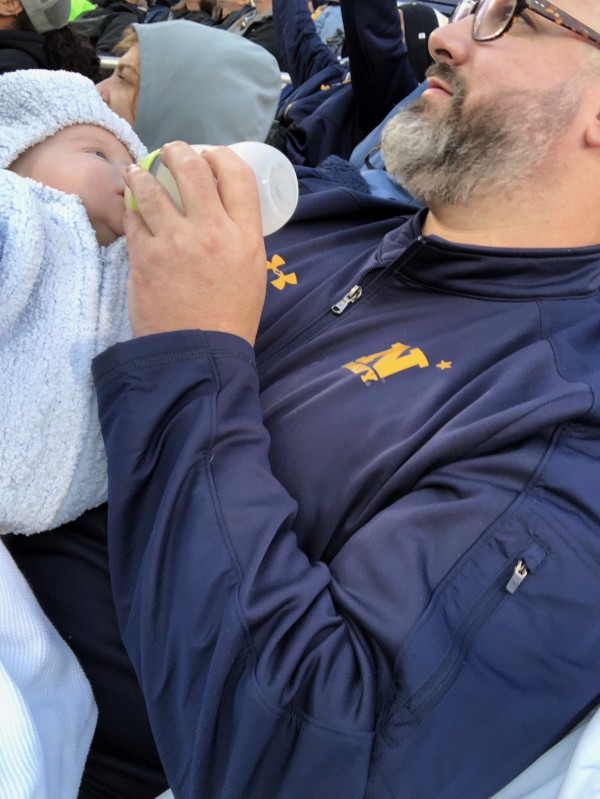 We took you to see your Grandpa when you turned five months old. It was your first plane trip. Just two hours to Tampa, but my anxiety was at peak performance and I could barely handle the anticipation of a plane ride with an infant. No sooner did the plane take off, you did what babies do at inconvenient times: you pooped yourself. Once we hit a cruising altitude, daddy unbuckled his seatbelt and stood up. Then he took you out of my arms, grabbed the diaper bag and headed off to the bathroom. I couldn’t believe my eyes, and those around us were equally dumbfounded when they realized what was going on. I’m certain that most thought it was odd for the Dad to change a baby in the plane bathroom. It shouldn’t be odd though. It should be completely normal, just like there should be changing tables in men’s restrooms. I was just curious how he did it at all because Dad’s not a small man. But he did it, and he brought me back a clean baby who slept the rest of the way to see Grandpa. Because that’s the kind of thing your Dad does.

I was all thumbs when you were born. Not only did I have several complications from birth that I was trying to heal from, but I had no idea what to simultaneously do with a baby. Your instruction book was lost somewhere between where you came from and where you landed. I had this notion before you were born that my role was to take care of you and Daddy’s role was to take care of me. As it turned out, Daddy took care of us both, and he hasn’t stopped. He forces me straight to bed when I’ve had a rough day at work; he insists on take-out when he knows I don’t feel much like cooking; he dances with you in your room until you squeal; he’s been spotted on the monitor app singing Bob Marley songs to you while you two flip through books; he goes to every single one of your doctor’s appointments with his list of questions; dances in the circle with all of the moms at your My Gym classes, and whips you up Belgian waffles on the weekends. That Dad of yours; it’s just what he does. 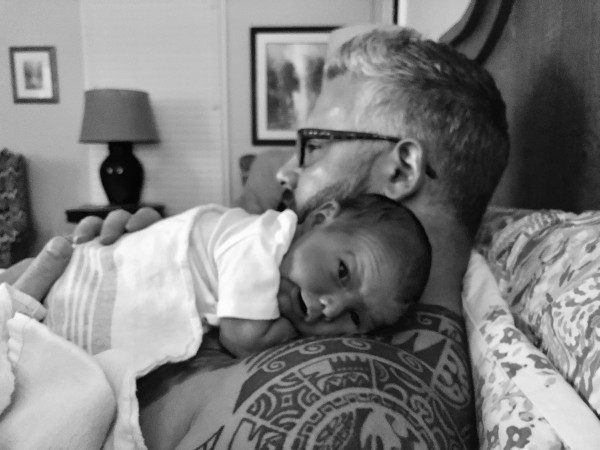 I never heard him say he was “afraid he’d break you” as a reason for not holding you when you were tiny. He never said he couldn’t change your diaper because it made him gag, (which it probably did). He never babysits you, because there’s no such thing as babysitting your own child; Never feigns “cluelessness” because he knows just as much as I do that it’s nothing more than a cop out and deliberate attempt to shirk parenting duties. And he’s never expected me to do the lion’s share of the work because I’m the woman. We both work full time. We both parent you. We are both exhausted. We do it together. We are a team.

One day you may decide you want a meaningful relationship or to be married. Until that day comes, keep an eye on your Dad and make notes of how he treats me, you, your doggies and all else with respect. It’s how we hope you’ll choose to be too. 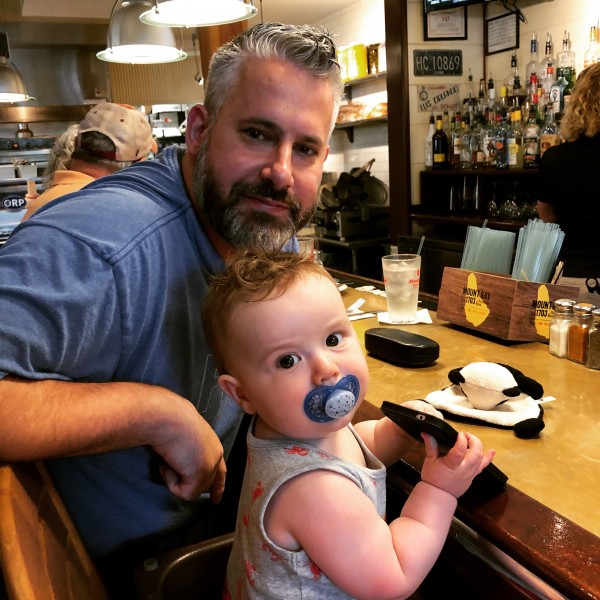 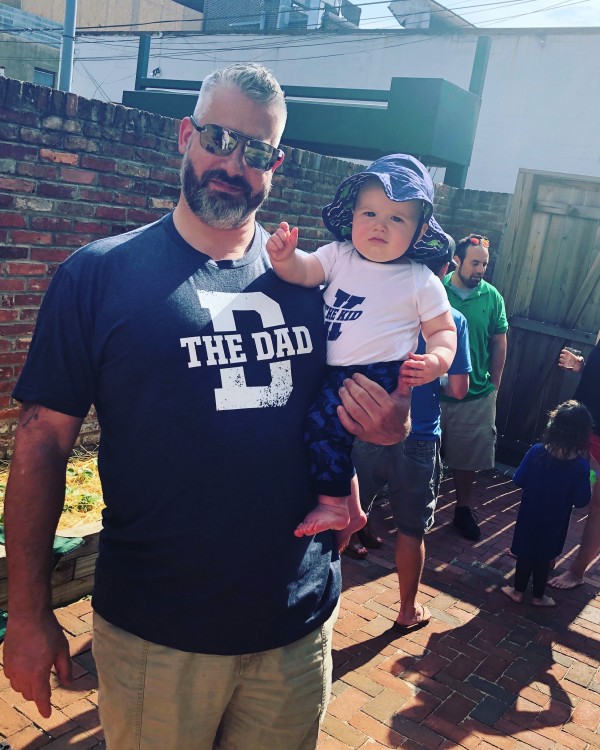 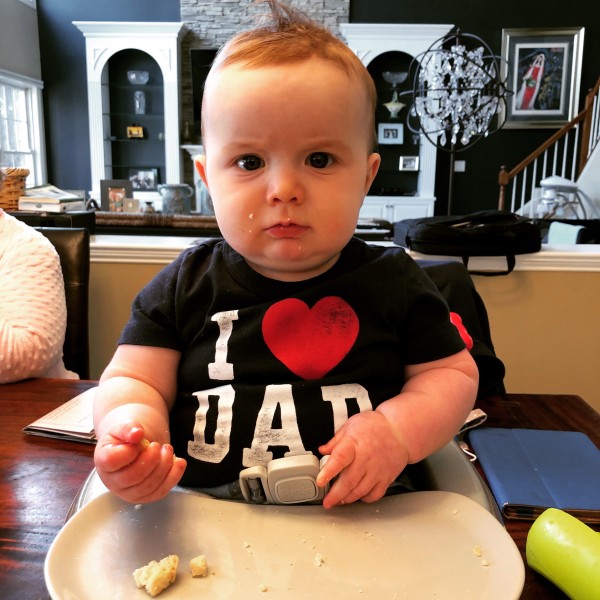 Aimee Lubin is a political affairs professional by day, a writer by night, a Philly native by birth, and a mom by miraculous chance. She counts Key West, good bath products, and vanilla coffee creamer as things she can't live without. A Philly native, she lives in Annapolis, MD with her husband, son, parents and two extra large retriever lap dogs. If she goes missing, she's probably hiding behind a charcoal face mask, listening to a true crime podcast. You can follow her on Instagram @aimee_in_annapolis and www.aimeelubin.com

I'm raising a Daddy's boy and I couldn't be happier
I pray you marry someone who loves you the way your daddy loves us
Daddy was explaining to me what it means to be beautiful, and you were his example.
advertisement

I'm raising a Daddy's boy and I couldn't be happier
I pray you marry someone who loves you the way your daddy loves us
Daddy was explaining to me what it means to be beautiful, and you were his example.