3 Things To Do When You're Stretched Too Thin

All summer long I told myself that things would get better once “school” started and we were back on a schedule. The fluid days of summer seemed carefree for everyone, except me. Our 16-year-old is home schooled, and our 20-year-old who has mental illness lives at home where she runs her own successful business. Both of these require a lot from me, from the twice weekly runs to co-op (a 40 minute drive each way) where I also teach 4 classes plus his other classes that I teach him, as well as his outside classes and social engagements. There’s also running around with our daughter for supplies, post office mailings and more. Adding in volunteer work with the local animal shelter, being part of our Emergency Response Team, and running numerous blog and social media accounts, my time is already stretched BEFORE I even get to the running of a household, dinner, friends, and last but not least spending time with my husband.

To say I am stretched thin is a vast understatement.

This year, I seem to have even more going on, and was scrambling to keep up. Then, it happened. I got sick with a stomach thing and ended up in bed for a whole day. I was too sick to think of blog posts, lesson plans or even the making of dinner, and I slept for 13 hours straight. My body decided to tell me in no uncertain terms that I needed to listen: I NEED TO SLOW DOWN AND TAKE A BREAK. Even thought things DID get a bit backed up, it was the best thing that could have happened. I added another thing to my list of things to do: Take Care of Me. I made a few decisions on ways to help myself from getting that overworked again and decided to make ME a very important thing on my to-do list. 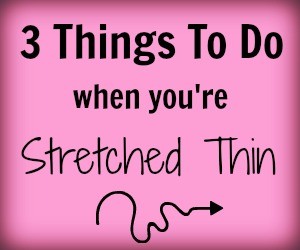 At first, I felt terribly guilty about all of it, but my husband put it best. He explained that

I’m still taking a care of our family, but now, I’m including ME as part of it.

He said that I was just as deserving of the care I bestowed on them to be given to me. It just took me a little bit to believe him, but he was right.

3 Things TO Do When You Are Stretched Too Thin
Will I Ever Pee By Myself Again?
Being Fully Present with Your Kids
advertisement

3 Things TO Do When You Are Stretched Too Thin
Will I Ever Pee By Myself Again?
Being Fully Present with Your Kids