Published by Christy Heiskala on October 24, 2017 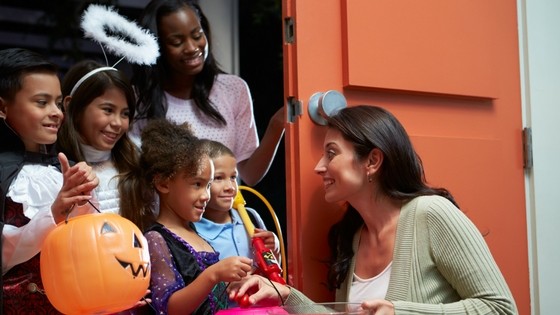 Kids have been told for years never take candy from a stranger. Then Halloween arrives, and we dress them up in costumes and send them to stranger’s homes to ask for candy.

Less than two months after we send our kids to knock on stranger’s doors, we take them to the mall and force them to sit on a complete stranger’s lap to pose for a picture. Even if the kid is kicking and screaming, we sit them on Santa’s lap and say smile for the camera. Sadly, the majority of photos on the Internet are of kids visually scared and screaming, trying to get away from Santa while he holds each child with a tight grip.

I love Halloween and Christmas. I am not suggesting we ban trick or treating or visits to Santa Claus. However, there is a contradictory message we are telling our kids about strangers. We are sending the message that in some cases, it’s okay to take candy from a stranger or sit on their lap. An adult can distinguish the difference, but the undeveloped child brain cannot nor should it be expected to. These mixed messages also undermine your authority because it tells kids that they can’t always trust your rules if sometimes they can be broken.

Once I started teaching child sexual abuse, the mixed messages we are sending our kids through these annual traditions became painfully clear to me. One of the top three skills I teach parents to prevent child sexual abuse is how to empower their kids to know they are in charge of their own bodies. Forcing a kid to hug or kiss anyone including their own family members sends the wrong message. When we tell kids what to wear and how to do their hair we are basically telling them they are not in charge of their own bodies. We are telling them that adults get to tell kids what to do with their bodies based on what the adult likes or doesn’t like.

When we force kids to sit on someone’s lap when they are crying and pleading is not only cruel it sends a very sad message to kids that we do not care about their wants and needs, and we are willing to subject them to the very strangers we tell them to stay away from all for the sake of a picture.

I am not suggesting you cancel pictures with Santa. However, I strongly encourage you to think about your child and the message it sends them when you force them to sit on a stranger’s lap. Perhaps we should think about modifying this tradition so it still celebrates Santa Claus, but doesn’t force touching. Sitting or standing next to Santa is just as good as sitting on his lap and doesn’t send the wrong message.

I am certainly not suggesting Santa is a child molester; it’s not about that. This issue is about the bigger picture of setting boundaries for your children that apply across the board to everyone. The boundaries make it clear for everyone and takes the burden off the child. This holiday season, I urge you to think about these mixed messages and reconsider new approaches to these old traditions.

Christy Heiskala is a mom of three and a certified facilitator of child sexual abuse prevention. She trains kids, adults, schools, and youth-serving organizations how to predict, prevent, and react to child sexual abuse. Don't scare them, prepare them!

Why I Will Never Make My Kids Sit on Santa's Lap
Why are We Unwilling to Discuss Child Sexual Abuse?
How to Protect your Child from Predators at Holiday & Family Gatherings
advertisement

Why I Will Never Make My Kids Sit on Santa's Lap
Why are We Unwilling to Discuss Child Sexual Abuse?
How to Protect your Child from Predators at Holiday & Family Gatherings