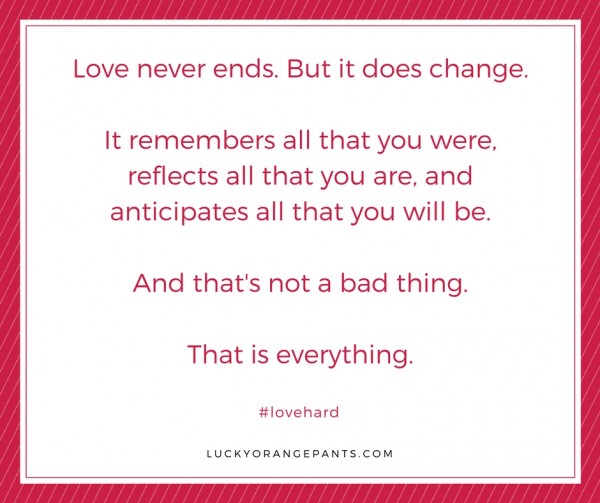 In the eighteen years since Billy and I took a chance on each other, our love has changed many times over. Love, after all, is not a fixed concept. It bends and adapts and grows to meet the changes in our lives, in our relationship.

And I think that's where some people get derailed.

Those who expect love to be the same at the beginning of a relationship as it is in the middle or at the end are doomed to disappointment and resentment. Love evolves. But the trick is to appreciate what it has become, not to compare it to its earlier incarnation.

When you first fall in love, you can't take your eyes off each other. Nascent love is raw and fiery and thrilling. It is all-consuming.

It's true - you don't get butterflies in your stomach every time you see each other. But those butterflies have been replaced by a warmth that is so much better, so much more fulfilling, so much bigger.

Somewhere along the way, the idea of a softer, gentler love became synonymous with boring. It became the punchline of cocktail party jokes and New Yorker cartoons. But the truth is, there's nothing boring about it.

Because when you think about it - when you really think about it - that's the kind of love that we all crave. Sure, the butterflies are kinda fun and you still have them from time to time. But guess what you don't care about when your kid is throwing up at 3am? Whether the guy holding your baby over the toilet makes your stomach do flip-flops every time you look at him. Trust me, your stomach is already flip-flopping enough at that point. What makes your heart swell is that he picked up a bottle of Clorox and started scrubbing the tiles while you changed the sheets for the fifth time.

Real love - seasoned love - isn't that excitement that you feel on a third date. It isn't the fire that keeps you awake at night counting the minutes until you see each other again. And it surely isn't butterflies in your stomach.

Don't get me wrong - those are all great things. But they aren't love.

And we have to stop thinking they are.

Knock-your-socks-off love isn't about the grand gesture. It's about anticipating the infinite ways to show your utter devotion to another's happiness. It is giving without having to be asked.

Love is the hand that claps the loudest at your accomplishments and the one that rubs your back when your shoulders are sagging from the weight of disappointment or sadness.

It is the hand that brings you coffee every morning and the one that does the dishes at night.

It is the hand that pays the bills and the one that tucks your babies into bed.

It is the hand that opens all your doors and the one who twirls you around the kitchen just to make you laugh. 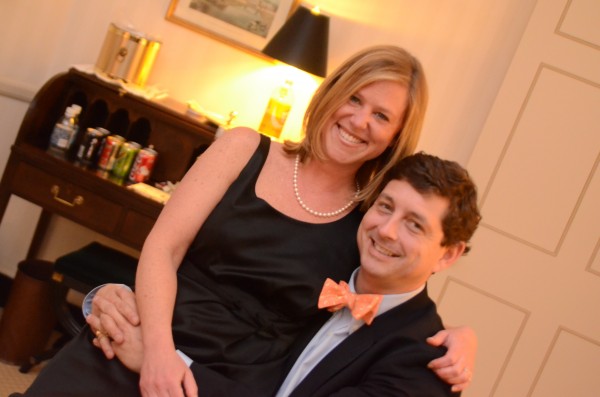 It is the hand that changes the channel to Monday Night Football when you walk in the room and the one that changes all the lightbulbs when you're working late at night.

It is the hand that brushes the hair from your face as you lie in the darkness and the one that grabs all the bags of M&Ms from the all-night convenience store when you've had a bad day.

It is the hand that rests on the small of your back when you're nervous and the one that pulls you into the water when the waves seem too big.

Love is the hand that holds yours when they place your baby in your arms for the first time and the one that quietly guides you down the hospital hallway to say goodbye to your father for the last time.

And that's not a bad thing. That is everything.

A version of this post appeared on Cameron's blog Lucky Orange Pants. Join her there or on Facebook where she writes about motherhood, marriage, being a grownup (sort of), loss, and UVA basketball.

Growing Up Friends
Wedding Bands
Let's Get Drunk on Each Other