Two Sisters, One Transplant, All Love 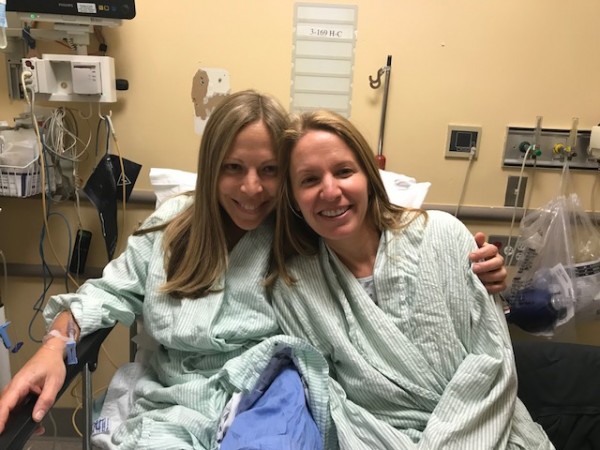 A lot of people say their best friend in the world is their sister. These two mean it.

Meryl was the little. Beth was the big. And as the littles often are, Meryl was spunky and full of life. You’d never know she was diagnosed with kidney disease when she was 7 years old.

Studies show that having a sister makes you a better person. Meryl and Beth grew up to live it. They listen better. They are kinder. And all that makes them a little happier too.

A bond that’s hard to describe but anyone can see. They make it obvious. They live right by each other. Their kids are besties … even their husbands. And they don’t just text. They talk on the phone daily.

Perhaps the ultimate showing of sisterhood came when Meryl called her big sister, Beth, this past November to tell her she would need a kidney transplant.

Beth knew this day might come. They didn’t talk about it much. How could they talk about the thing that made them feel like their world would literally collapse inside itself?

Failure and rejection. What would happen if there was no match found quickly or at all? Failure and rejection. Those are the words that kept Meryl up at night. These fears were compounded by a constant reel of her precious 5-year-old twins in her head. These twins took energy. Energy to chase and energy to love. And her energy was rapidly depleting.

“If you have any living donors, you should ask them to get tested.” That’s what the doctor’s office sent in an email. Meryl was never going to ask.

She didn’t need to. Not one, not two … yes, three people got tested. They just did it.

There was no pause, no thought of recovery time, time from work, or time away from her two kids. This was her sister. Her soul sister. And her soul didn’t beat without her … so it would be done. The only time that mattered was time together, as sisters.

The process felt long. Filling out forms, testing … day after day. Waiting for results. But it didn’t matter. What mattered, was that she was a match. Maybe no surprise. They always just fit each other. Why would now be any different?

Meryl grew more ill. Still working, running around with her kids, but napping when she could. Weaker, more pale, her legs so swollen that walking in shoes was a challenge.

Failure and rejection no more.

Now, that helpless feeling replaced by tears of relief. Lots of tears. It was just assumed. Beth would do it. And Meryl, still marvels at that.

Meryl’s kidneys were failing. So now they moved quickly.

They did what they could to find light in the process. Like getting a blowout just before the big day. Shopping together, going for lunch, trying to distract themselves. If they stayed still for too long they might just feel the fear of the unknown, so together, they pressed on.

The morning came for the transplant. Those bestie kids were taken care of so their husbands could be there. So was an army of family and friends they’d come to know as this sisterhood’s village.

“I love you.” Those were the last words they spoke before they went in for their surgery.

And when Beth woke up, she didn’t think about herself. How her body was now functioning with one less vital organ. She thought about her sister. And asked for her sister. Again and again. After she was assured that she was all right, the pain set in.

Meryl, seven curtains away, woke up immediately feeling better. So much better. A new lease on life.

No more sleepless nights consumed by thoughts of fear and rejection. Meryl’s life is no longer on hold. And she’s no longer worried about being “a sick mom.” Now, her twins chase her. She thinks Beth’s kidney helps her to tick just a bit better.

People call Beth a hero. Nah, she says. In fact, she confesses, really she was selfish. She did it because she couldn’t survive without her little sister.

Today, there are more than 90,000 people waiting for a kidney. Waiting for their second chance at life. Matches aren’t easy to come by. And because of Beth taking Meryl off the list, someone else will get a kidney sooner.

They know they’re lucky. And if being grateful is the secret to happiness, then they live happy.

Sheryl Ziegler, Psy.D., has been friends with Meryl Elkin and Beth DeBeer for more than 25 years. They all grew up together in Monroe, New York. Beth is a guidance counselor in Katonah, New York, and Meryl is a teacher in Ardsley, New York. Dr. Ziegler is the author of the new book, "Mommy Burnout: How to Reclaim Your Life and Raise Healthier Children in the Process."

Be brave and persevere
A Mother’s Fight, and a Stranger’s Ultimate Gift
Our Twins Have Cancer, Diagnosed at 1 Month Old
advertisement

Be brave and persevere
A Mother’s Fight, and a Stranger’s Ultimate Gift
Our Twins Have Cancer, Diagnosed at 1 Month Old