Two Sides Of A Coin

Bubbe and The Skootch are two sides of a coin.

Bubbe, now a smidge under 9, was the 2 year-old who got off the classroom rug at dismissal only after he knew the other children had a place to go and the little guy who sat in the corner and covered his ears at birthday parties. He is the child who relishes in engineering golf courses and marble runs out of anything he can get his hands on and the boy who recently told me after I advised him to push back as needed, “Mom, I’m not that kind of kid.”

Four year old Skootch on the other hand, is a one speed, rock and roll, let me smell you, ninja machine. He is the kid who proudly wakes his parents at two in the morning to show us the late night grape juice he poured for himself, the child who sings loudest at birthday parties, the one who pops a balloon and tries to fix it and the boy who loves a good boxing match.

On a recent family outing, we found ourselves here; 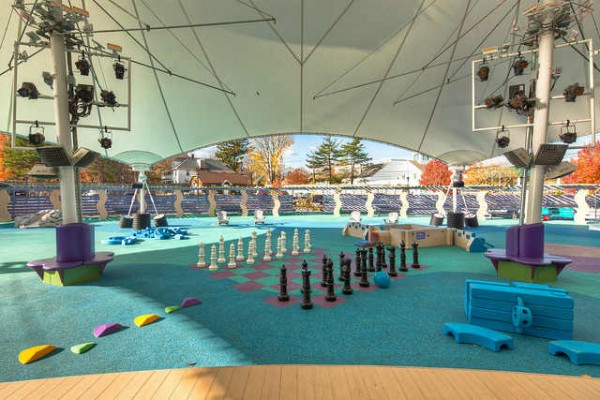 The Celebration Courtyard of a nearby children’s museum.

I’m pretty certain this foamy, cerulean hued open play area is meant to encourage calm, but on this particular Saturday it looked more like a loony bin for babes.

Bubbe naturally made a beeline for the blocks. Swarms of children surrounded the construction materials, moving in and out, taking them at will. He tried to grab what he could but the other children kept getting there first.

The biggest boy of the bunch became a regular culprit. Not a caregiver in sight, this young Lummox grabbed at our son’s small stash again and again without so much as asking.

Bubbe began to hold his temples in distress; his thoughts piercing the calm. “What am I going to do; how am I going to manage this problem?” Thirty seconds of frozen agony seemed like a lifetime for the poor boy.

Our golden-haired fire hydrant watched Bubbe desperately trying to get his bearings, sensed the angst, and swooped in for the rescue. He marched right up to the Lummox twice his size, waved a pudgy southpaw finger up at him and yelled, “Hey this is our space and you don’t take anything from here!” Then he stepped in and offered a right hook.

The Lummox recoiled and found a new space from whence to steal.

As soon as Skootch was confident that Bubbe’s artistic space was clear and safe, he asked his brother, “Ok, now what?”

Bubbe gave the order. “Go get a couple of blocks.”

“Alright.” Skootch scurried off and returned with the coveted blue, foamed mass.

For an intense 10 minutes, Bubbe constructed and sent Skootch into the wild as the little boy happily obliged his big brother’s instructions.

Together they created quite the structure.

Too pooped to pop, Skootch lied down in the center of the masterpiece. “Thank you for building my castle,” he said.

We never expected to have two children; Mac and I were content with one, healthy Bubbe. The Skootch was a happy accident. We wouldn’t have it any other way. Our sons, these brothers are a gift; to us and to each other.

They are most certainly two sides of a coin, but together their value is immeasurable.