'Twas the Night Before Inauguration ... Here's the NEW Story To Tell Your Kids 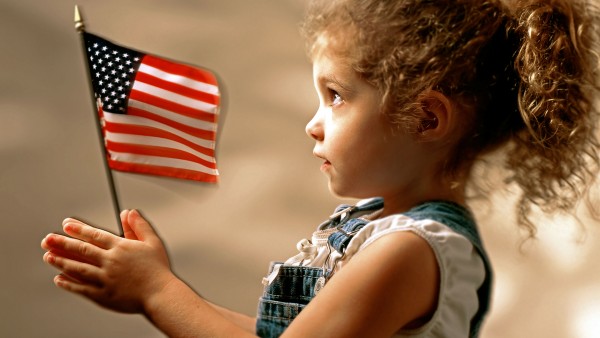 In the worst of times, I'm an optimist. I'm a cup half-full Woman/Mom/Wife/Writer. So here it is ... The Inauguration, and we've got a lot to talk about. For the sake of transparency, my family (immediate and extended) are deeply divided between hardcore Republicans and diehard Democrats. Holiday dinners are The Goldbergs-Meet-Face the Nation. But here's the one thing — THE THING — that all of us can agree upon: We love our kids. So do the Obamas, the Bidens, the Trumps, the Clintons, the Palins, the Baldwins, the Streeps, the Kardashians ... and so it goes.

How 'bout we wax positive for a minute ... join me on this journey. Here's what I saw this past week through the lens of a parent (not as a voter). President Obama in his farewell speech told the Watching World that his greatest accomplishment was being Dad — to his smart, beautiful daughters Malia and Sasha (who we all know was not in attendance because she was taking her high school finals. Great parenting, by the way. His big speech, the Obamas made clear, was NOT more important than their daughter's education). And then along came those savvy Bush Twins — Barbara and Jenna — again delivering a heartfelt Big Sisterly open letter to the Obama teens (their first letter of advice to the Obama sisters was penned in 2009) on what they can expect after leaving the White House. How to navigate as former First Children; how to be, how to use to their advantage what they had learned growing up under the spotlight glare, and apply those unique life lessons and their own passions into their new post-POTUS and FLOTUS lives.

As a Mom of three teenage daughters, that unsolicited advice was golden, a gift. Not to mention the optics: Two Republican-bred women reaching out to their young Democratic counterparts with care, intellect, and "been there/done that" advice. It was beautiful synergy on every front. Now close your eyes for a moment and imagine that happening in, let's say Iran .... two young women — daughters of prominent leaders publicly reaching out to the opposition party's daughters with life lessons, warm wishes, and support for their futures. No way in hell. Only in America, and in my Parenting Handbook, the very best of America. Our freedom to speak, to write, to care — and most of all, to be open about it.

No matter how you feel about Donald Trump, his kids clearly adore him, fight for him, advise him, stand next to him with poise and intellect — and irony of ironies — the man listens. Even Hillary acknowledged in one presidential debate that the one thing she admired about Trump (he noted her tenacity) was that he clearly is a great parent — just look at his kids.

We all — Republican, Democrat, Independents, regardless of race, religion or sexual orientation — do share this one commonality: We want the best for our kids.

And when our kids launch, we can only hope, like the Bush/Obama/Clinton/Trump kids, that they take the best of us with them.

So here we are, facing the inevitable change. While many are celebrating the new President, just as many among us are knee-deep in the five stages of the political grieving process.

As we approach the Inauguration, I believe it's time for all of us to come to the final stage and embrace the A-word: Acceptance.

It's also time for us to deliver this same message to our children. I cannot count the number of times that one of my daughters has said through the years: "OMG, I have the worst (math/English/biology) teacher in the school — it's going to suck." And I would respond: "You need to work with her/him and give that teacher a chance to prove her reputation wrong — it just might turn out better than you think." And if that teacher is still "the worst" — well then my daughter STILL has to work with her and find a common ground. It does suck — but that's life.

There has been hate and meanness and bullying on all sides of the political spectrum this election cycle — it's been middle school at its worst. Let's now come together, heal, and do what we need to do for our nation and for the one thing I can safely say we ALL care and agree upon: our kids' welfare. Show them acceptance of our new Commander-in-Chief — even if you disagree with his politics. Show them the beauty of Democracy — your vote matters, even if your candidate didn't win. Show them the skill of letter writing to your representative — whether it lands in a waste basket or on someone’s desk — that your opinion matters. Show them that you can march freely with placards and solidarity to voice your views and people do listen. Show them, most of all, that even if we don't agree — not to be judge-y, but be kind — to give someone an opportunity until he or she is proven wrong. In simplest terms, give the new guy a chance.

If he tweets, well then, you can tweet back.

America is great, because we’re all about new beginnings, all about being innocent 'til proven guilty, all about expressing ourselves. Teach your kids this, and while you're at it, on Inauguration Day, underscore what the Bush Twins did for the Obama Sisters as a prime example of putting differences aside with outreach and care by delivering the greatest bipartisan message of all to our nation: Separately, we are all in this together.

Yes, let's look at the possibility ... this is OUR Inauguration to teach life lessons. You go low, we go high. This is real power, real parenting.

So as we enter a new chapter, just remember that the book doesn’t start or end with Donald Trump or Hillary Clinton or Vladimir Putin or Julian Assange — the message to our children begins with us.

'Twas the Night Before Inauguration ... Here's the NEW Story To Tell Your Kids
What's next? Be the GOOD...
"Mommy, should I be scared that Trump won?"
advertisement

'Twas the Night Before Inauguration ... Here's the NEW Story To Tell Your Kids
What's next? Be the GOOD...
"Mommy, should I be scared that Trump won?"