To the Woman Who Minimized the Loss of My Baby

Published by Jenny Albers on October 2, 2018 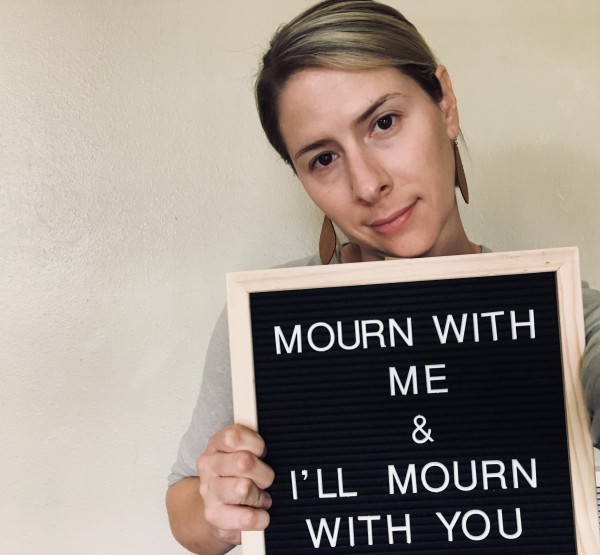 To the Woman Who Minimized the Loss of My Baby:

You are absolutely correct. I don’t know what it’s like to have a full-term newborn baby die in my arms, but I can imagine the trauma and devastation you experienced as you watched your baby take his last breath. I really can. And I am so very sorry that you have been left to live life without your child.

My heart breaks right along with yours, because I know the crushing heartache of losing a baby. But I need to be very clear about something.

Your full-term loss in no way diminishes my 20 week loss. Or my 6 week loss for that matter. Your loss looks different, sure. And your grief probably does too. But I am just as much a mother to my babies as you are to yours.

I’m not sure why you feel the need to compare, or dismiss my grief. Do the differences in our experiences really outweigh the similarities? We loved our babies. And we both left the hospital without them. Doesn’t that leave us with enough in common to support one another’s grief instead of having to defend it?

You discouraged me from discussing my babies, my grief. You stated that I was full of “crap,” because apparently you believe that only full-term babies are worthy enough to be grieved. To be missed. You think that because your pregnancy lasted longer than mine, that somehow makes the loss of my baby insignificant.

But I need you to remember that the pink lines on those pregnancy tests confirmed the validity of my babies’ lives. The appearance of those two pink lines proved my role as their mother, just as they did for you. I had made plans to spend a lifetime with my babies, to watch them grow up, to become a grandmother to their children. And I am guessing that you did too.

You said my experiences were “nothing” like yours. And maybe you were right. My early loss did not leave me with any evidence of the life that had been. And my later loss did not allow me to see my baby take a breath. But while our experiences were different, they both had the same ending. With babies who never made it home.

You went on to tell me that I have “no clue” what it feels like to lose a child. But you couldn’t be more wrong.

I know exactly what it feels like for I too have held a dead baby in my arms. A baby whose tiny kicks left me feeling giddy, for a short time anyway. A baby who may have been smaller than yours, but was complete with 10 fingers and 10 toes. A baby who had two eyes and his sister’s nose. A baby whose heart beat wildly until just before birth. A baby who disappeared into the arms of a nurse, never to be seen again.

I bled for weeks. My breasts filled with milk. My baby belly remained. Each of these a reminder of what I should have had, but didn’t. And I am betting I can say the same for you.

And while my early loss did not produce the same evidence of life and death, I knew that my baby had existed, while at the same time knowing that the life I had imagined would never be.

My response to each of my losses was similar. I sobbed. I hid in bed. And I too, for awhile, became lifeless. However, my grief looked different after each loss because each one possessed distinct characteristics. But different does not mean less significant.

I have great compassion for you as I can only assume that you are wading through the deepest waters of grief. Raw grief that can lead to the belief that your suffering is greater than the suffering of anyone else. And that’s okay. I’ve been there too.

So I will mourn your baby with you, and I will listen when your grief needs an outlet. But I will never stop talking about my babies who are gone. And I will never be ashamed to mourn them. Because they were babies, just like yours.

This post was originally published at A Beautifully Burdened Life. Be sure to follow Jenny on Facebook for more on her incomplete family and imperfect motherhood.