To my son's best friend on the eve of Kindergarten 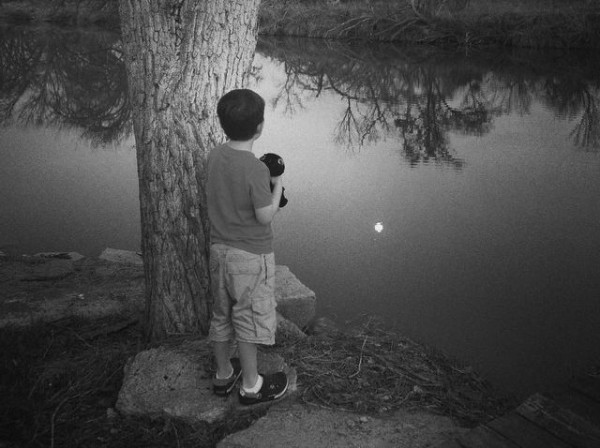 We need to have a talk.

I know; we don't usually get a lot of one-on-one time, since my son pretty much has you attached to him at all times, as his designated lovey. But he's sleeping, so let's you and I have a little heart-to-heart.

You have been a great sport, Bunny; I give you lots of credit for that. You have had your nose chewed on, your mouth is nearly faded away and your ears -- your poor ears. You have held up remarkably well since his first birthday, when he received you as a gift from his grandparents.

And I really appreciate that you never let on that you have a twin brother in weekly rotation hiding up in the closet. That was a rare stroke of genius. It was just a few months into your relationship with our family when we realized that you were going to be very important to us. I scoured the Internet to find a back-up Bunny, and found him (or is that you?) on a site which charged me double. Worth every penny.

Anyway, we are glad you have been here these three years to catch his tears and revel in his joy.

Here's the deal, my friend -- I'm going to break it to you as gently as I can.

There is going to be a day when he doesn't need you anymore.

Shhh. I know. I'm getting choked up too. I'll wait until you can compose yourself.

I'm sure this is coming as a shock. I know, right? Me, of all people -- I'm the one giving you the news that he's growing up, in a calm and non-panicky manner.

Listen, he is starting kindergarten in a few weeks. KINDERGARTEN. I have already told him that it's best for you if he leaves you at home. He is stoic about it; he understands that if Jake or Luke or Cara gets a sticky little hand on you, you could lose a foot.

Don't look at me like that. We won't let you lose a foot.

Bunny, what I'm trying to say is that he's going to be hurtling toward a time where he spends more time in school than at home, and you and I are going to be hanging out together a lot more.

That would help me out more than you know.

He's going to outgrow you. And me too, in some ways. No, I'm actually not fine with that. Yes, thank you... I would like a tissue, please.

But remember, growing up is normal. Let's say it together: GROWING UP IS GOOD. You have served a very important purpose here, and you will always be welcome here. Don't even think about packing up your stuff and moving out, because you're FAMILY.

At some point, our little boy is going to be hitting baseballs in a real field and not just in our living room. He's going to be racing mountain bikes at breakneck speed down hills... just like I did. He will look at girls in a whole new way, at some point.

Luckily, I think that day is still years away. You still have plenty of good days left, Bunny. Don't be sad.

For now, I want you to enjoy every moment.

Well, that's true: no one can enjoy every moment. The times when he cries and wipes his nose on your face must be pretty unpleasant. And when he tosses you around or jumps on you, I don't imagine that feels so great, either. When he gets frustrated and yells and I yell back, I would think you probably want to run out of the room.

Sometimes, I do too.

Oh, Bunny, this is hard.

Letting go is my least favorite thing about motherhood.

But if I don't, then I'm not doing my job. You see, that's our objective. We're here for him to lean on, and chew on, and snuggle with, and talk to, and wrestle with until he is ready to move on.

We're in this together, my friend. Thank you for being here for us.

Now shoo -- go and snuggle up with him while he still smells a little like a baby on the back of his neck, and while his skin is still nearly as smooth as it was when he was tiny, and while he still loves to be with us more than anything else. It's all going to change.

Kristin Shaw is a freelance writer, 2014 and 2015 BlogHer Voice of the Year, and co-producer of the Listen to Your Mother show in Austin, where she is the mother of a mini Texan. Find her at Twitter @AustinKVS, Facebook, or her blog http://www.twocannoli.com, where she writes about relationships, motherhood and love.

On the eve of kindergarten, a letter to my son's best friend
Wrapped up in Daddy
To the girl who will someday marry my son
advertisement

On the eve of kindergarten, a letter to my son's best friend
Wrapped up in Daddy
To the girl who will someday marry my son