Time Is Divisible, Squirrels Are Not!

Published by Steve Nazarian on October 19, 2015

It is no secret to my regular readers, that my wife and I have four, rather closely spaced children. This “tight grouping” has had both advantages and disadvantages over the years, but since we don’t really know any better, it is the life we live.

One of the things we have always done is speak to our children, using normal adult language. We never really used “baby talk” and once they were at all conversant, we never dumbed-down our lexicon. We have always spoken to them as we would any other fully developed human, and as a result, all four of them have a functional vocabulary far beyond their years.

Most of the time, their better-than-average command of the English language works to their advantage, be it in class, in a crossword puzzle or when playing Scrabble. However, there have been times when having offspring with exemplary language skills makes parenting a bit trickier.

Several years ago we had a problem with kids getting out of bed once they were tucked in for the night.

It wasn’t like they were wandering into the street or anything, but since they were in bed hours before Emily and I would be coming upstairs, we would sometimes find one or more of them awake and playing quietly as late as two hours past the mutually agreed bedtime. This made for very cranky kids the next day, which is no fun for anybody.

Understanding that the only thing that kids hate more than going to bed on time is going to bed early, we decreed the following new rule:

If any child is found out of his or her bed, after they have been put to bed, that child will go to bed thirty minutes earlier the next night. The only exception to this rule being if the child is simply going to the bathroom.

At first, the rule was taken seriously, and for several nights after its issuance we had none of the previous problems. Then, one night, about twenty minutes after my son Lewis had been put to bed, I went upstairs to simply get something out of my bedroom.

In our house, as you come up the stairs, the kid’s bathroom is right in front of you, on the right is a solid wall, and as your head rises above the level of the second story floor, you can see straight down the hallway to the left. 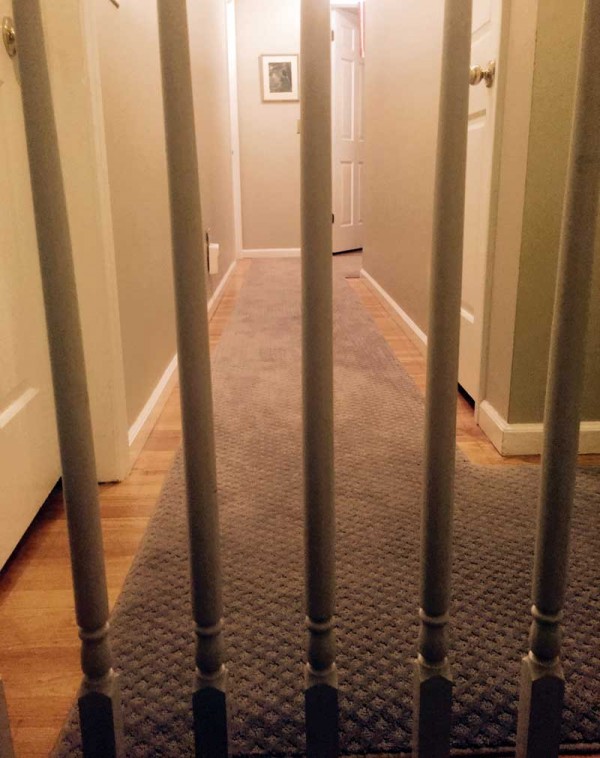 Our upstairs hallway. Lewis was sitting at the end, happy as a clam.

As I innocently ascended the stairs, out of my left peripheral vision I saw something I shouldn’t have - sitting on the floor, at the end of the hall, was Lewis, happily building a car out of Legos. If memory serves he was maybe seven years old at the time.

I walked down the hall and asked, “What are you doing buddy?” He looked up at me and said, “I’m building a car.” I explained that he needed to get back to bed since it was twenty minutes past his bedtime. He calmly, and dutifully got up and went to bed.

The next morning at breakfast, in front of the other children, I told Lewis that he was the first to incur the punishment of the new rule and he would be going to bed thirty minutes early that night.

Oh boy was he angry!

At first he argued that what he was doing was educational, and as such was in fact not a violation of the new rule. This argument got no traction with Emily nor me, and was immediately dismissed by his siblings. Lewis then switched tactics. He began to argue that since he was out of bed only twenty minutes beyond his bedtime, that the should only have to go to bed twenty minutes early, not thirty.

Quite literally my seven-year-old was trying to make a deal with the prosecutor.

He was having none of it.

Lewis dug his grade school heels in and would not let up. He insisted that being caught out of bed twenty minutes after his bedtime should carry a maximum penalty of twenty minutes, nothing more.

My frustration was growing nearly as fast as the amusement of everyone else at the breakfast table.

I decided to use my substantial analogy powers to break this logjam. Taking a deep breath I said, “Lewis, you know that stuffed squirrel you love so much?” Quickly and enthusiastically he replied, “Yes!” You see; Lewis has always loved squirrels. I had found his Achilles heel and I knew I was about to land the deathblow to his second grade argument.

I continued, “Let’s say, just for the sake of this discussion that your squirrel is worth $10. Imagine your sister Charlotte took your squirrel and chopped off one of its legs. If she did that, she would owe you $10 for a new squirrel, right? Even though she cut off only one leg, 25%, she destroyed the whole squirrel. So, she would owe you the full $10, not just $2.50 for one leg. Does this make sense to you now?”

Lewis took in my argument, scrunched is face up in the way that children do when they are using the full power of their little brains, and said,

“Dad, time is divisible, squirrels are not!”

The room went silent. It was clear that I had just been verbally b**ch-slapped by a seven-year-old, and nobody (including me) knew exactly how I would react. I took another deep breath and calmly replied, “Yes Lewis, that is absolutely true, but it doesn’t change the fact that you were out of your bed after bedtime. The penalty for that is going to bed thirty minutes early, which is exactly what you will do tonight.”

Everyone breathed a collective sign of relief, except for Lewis who was sill pissed that he had lost the argument.

In a court of law, in front a jury of his peers, I most certainly would have lost, but lucky for me I could pull the “I’m the Dad, that’s why” card. Sometimes as a parent you have to end the discussion and be judge, jury and executioner in one swift, single statement.

We have taught our children to use the full power of language as a regular tool in their lives. This was the first time it came back to bite me, but I assure you it will not be the last. They are all strong debaters and they never come to a fight unprepared. My wife and I often overrule their little “Clarence Darrow” speeches, but we are proud just the same.

It is even more fun to watch them argue with each other, but since each of them is willing to fight to the death, we regularly have to break up those discourses as well.

We are sending them into the world ready to state their cases in a clear a cogent manner, using the biggest words they can. That is a greater gift than any Xbox, iPhone, or fuzzy jacket from The North Face.