This Thanksgiving, I'm Thankful Because my Husband is Selfish

When my husband and I sat down with our pastor for our first session of pre-marital counseling, my mind was a flurry of white noise, punctuated by tiny little flickers of red-hot panic. So much was happening in my little world at the time that I don't think I had the executive functioning resources available to make sense of much of what he was saying to us.

The one thing I do remember from our meeting was our pastor saying, "The best marriages happen when both people think they married up."

Damn, was he right.

Sorry. I always forget, no swearing about church stuff. 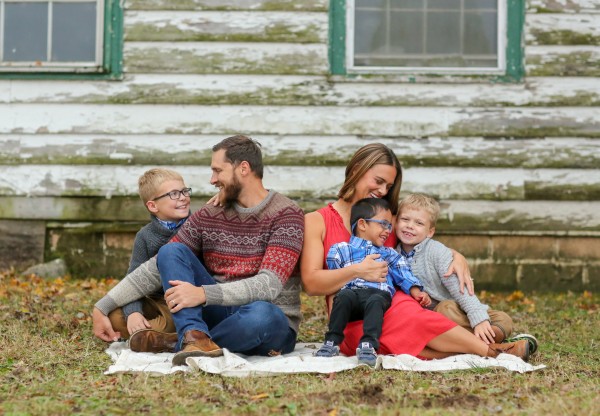 Now, don't get me wrong. My husband Brian and I, we both have our strengths, but if we were to really tease out the pros and cons of each of us as a human person, my husband would walk away the victor - hands down. I know that he's out there today, reading this and because we've known each other for over a decade now, I can see exactly the face he is making, while he is silently disagreeing with me.

Because, he thinks he married up too.

Of course, I don't always feel this way about him. I think it would be physically impossible to walk around with great, big dopey, Disney princess eyes, fawning over your husband all the time. Because sometimes husbands (and wives) do things that make you cringe and cause you to think...

I have a horribly difficult time pulling myself away from the minutia that occupies most moms: scraping caked food stuffs out of the crevasses of our dining room table, fishing Lego guys out from between the 1/2" space between the washing machine and dryer, mashing cauliflower into a paste, so unidentifiable that my kids will think its a pizza crust - you know, regular mom stuff. But my husband, he isn't interested in participating in any of this. While I'm messing around, sticking chewed Orbitz gum on the end of a coat hanger to stick into the abyss of our laundry room, my husband might be found, feet up, on the couch with a book in his hands. Ignoring our children's barrage of questions about when dinner will be ready and quietly sipping on his favorite beer - that I bought for him.

When he finishes his chapter and looks up to put his beer on the coffee table, he is completely recharged. He glances at me and tells me I look pretty (He's right. If you find women with wild eyes, dirty clothes and mussed up hair attractive) and asks if I need any help getting dinner ready. He gets milk for the kids and leads our family in a prayer. I tell him I would like to scoot out to the gym and instead of begrudgingly muttering "Fine." under his breath (like I might) he brightly chirps, "Sure Hun!" He cleans up the dirty dishes and ushers our boys off to their room and happily plays a round of basketball with them - complete with a fake, loud announcer voice, calling play-by-play for the entire game. He selfishly takes care of himself, so he can selflessly take care of us.

And then he tells me specific details about a phone conversation he had with his dad, when we first started dating. Or recounts with flourish, to anyone who will listen, the story of the day we first met or what life was like when we brought our oldest home from the hospital. When our three-year-old does something cute, he'll look at me and say, "Oh, don't you remember when Oliver used to do that?". Sometimes I do. But not always - I'm usually thinking about all the unmatched socks out there. He forgets the little things, the day-to-day things, but he remembers the things that matter. The things that are worth remembering. 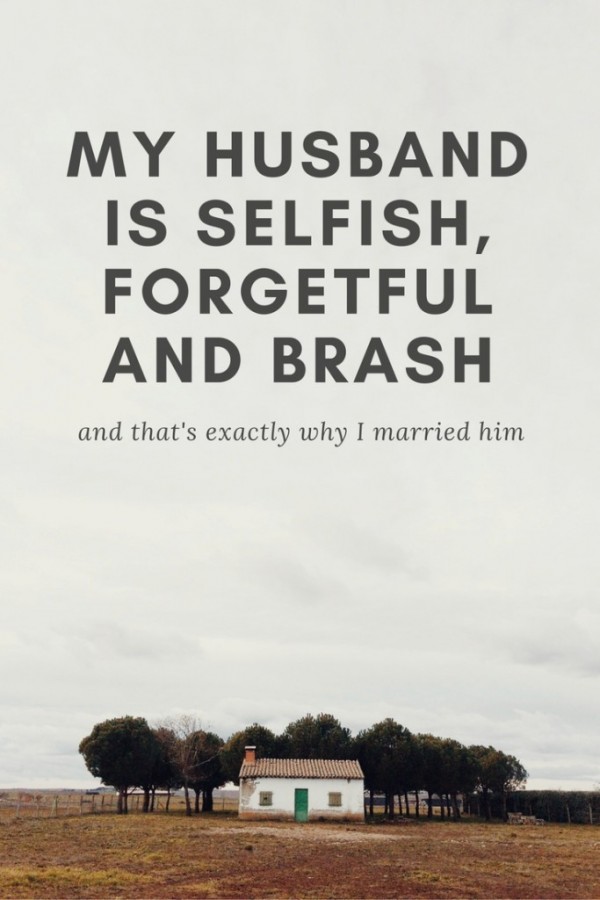 I don't like to leap into anything headfirst. In fact, I'm one of those people who jump into a pool, pencil-style, holding their nose. My husband, on the other hand, usually bounds into the deep-end by way of a cannonball or another equally-exhuberant entry method. He's a go big or go home kind of fella. He's the guy who, right after we brought home our first child, quit some people's dream job to follow his passion. He's the guy who bought all the equipment to brew his own beer (in our bathtub, when we had that same newborn baby) and made only one batch. He's the guy who decided it's a done deal, we're adopting, before I was brave enough to say the words out loud.

He has the tenacity, optimism and Heman-like chutzpah, of a old-timey, Hollywood protagonist. Things that I couldn't even dream for our little family, he makes a reality. He challenges me to set my own goals, to have a vision for my life and take chances. He is the embodiment of that old Mae West quote "You only live once, but if you do it right, once is enough".

So at night, when my selfish, forgetful, brash husband gets home from work, and sets his bag down on the counter, which I've asked him not to do a thousand times, I am reminded that I majorly outputted my coverage. I found my perfect person. 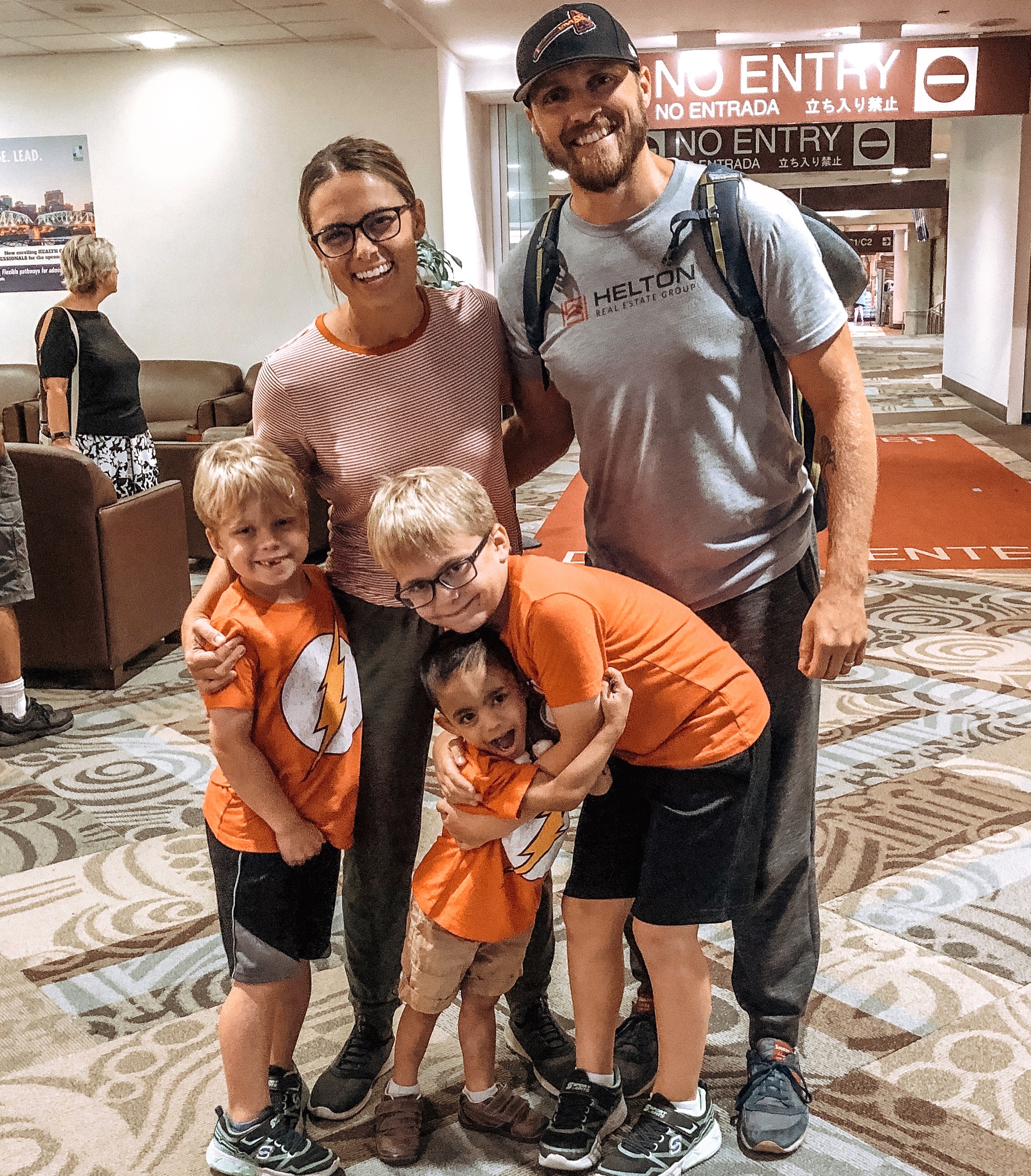 Hi there! I’m Kelly. A Boston-native who voluntarily packed up my life and moved down to Nashville back in 2008. I met my husband on a pontoon boat a month after arriving and we bonded over a shared love of Baked Lays and SPF 15. We have three boys (one of whom just joined our family via an international adoption,) three chickens and a lot of love for family kitchen karaoke. My blog, KellyBandas.com is dedicated to sharing the benefits of Positive Parenting and Adoption with other parents. I also write about funny stuff too – but if I tell you that, I feel like it really takes away from those essays actually being funny. Like when someone tells you they’re really sarcastic - just let it reveal itself on its own...

Jewish Sasha Fierce
My Husband's Most Important Job: Teaching Our Sons How to Treat Women
The Power of Touch
advertisement

Jewish Sasha Fierce
My Husband's Most Important Job: Teaching Our Sons How to Treat Women
The Power of Touch