This Dad Needs the Girl Scouts (or a gift wrapping tutorial)

Published by Greg Schwem on December 8, 2016 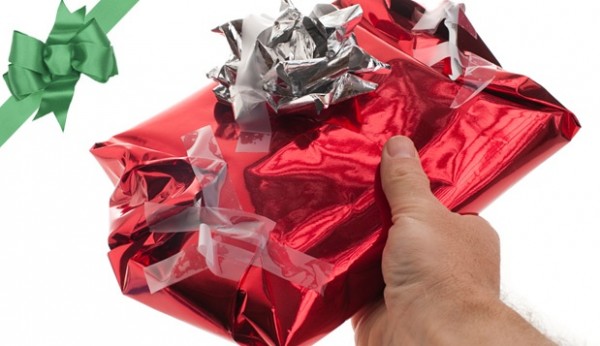 I chopped down the tree. I scaled the ladder, balancing precariously on one foot so those innermost, hard to reach branches would sparkle with light. I endured the physical ardors of hauling boxes of decorations from the basement, knowing full well that my creaky back has less than a month to recover before I perform the same task in reverse.

I have accomplished all of these manly jobs that come with the blessed holiday celebrating the birth of our Lord. All that's left is the most difficult task for a man, any man:

Each year I gamely try to make Christmas gifts look like, well, actual "Christmas" gifts and each year I fail miserably. Holiday wrapping is not an acquired skill; from birth you either have it or you don't.

And I know of very few men who have it, judging from a conversation I had with some of my guy friends on a recent Saturday night.

"Why bother? My wife knows what she's getting anyway. Heck, she picked out most of it."

"I put everything in those gift bags. If you tape the handles together, then the gift still has to be opened, more or less."

"I crinkle the tops of colored tissue paper and put that in the bags. Use red and green together and fluff it up. It makes gifts appear more festive."

Ah, the Girl Scouts, that time-and sanity-saving organization of giggling, cookie-hawking junior high students who descend on the local malls come December and are a godsend for every man. Hand them any shaped gift - even an umbrella in the open position - and check the sports scores on your iPhone while a scissors-wielding Kristy expertly cuts paper. She'll pass the gift to a tape-dispensing Grace, who seals it and slides it over to future- interior-decorator Chloe, who joins together multiple ribbons with the ease of a party clown who twists balloons into swans. At the end of the table sits another Scout (or quite often a Scout leader) who announces that gift wrapping is free, but "donations are appreciated."

For this service, I would gladly turn over the deed to my house, my entire investment portfolio or a winning Powerball ticket.

Unfortunately, I have made three trips to my local mall since Thanksgiving and cannot find the Girl Scouts, or any type of gift-wrapping service anywhere. What's a man to do?

"You don't need to wrap my gifts," my wife said. "And I'll wrap all the gifts for the kids."

I knew it was an empty offer, and one certainly not worth accepting, judging by the number of 2 a.m. glares I have received on Christmas morning pasts. Bleary-eyed and slightly tipsy from Christmas Eve wine, my wife struggles to seal the rest of the gifts while I lounge in a chair, gazing at the tree, sipping a holiday cordial and saying, "The kids are going to be up in four hours. Almost done?"

Nope. This year I vow to be an equal partner in gift wrapping. I even offered to jump start the process by wrapping the gifts my wife had already ordered, and received, from Amazon.

"Fine," she replied way too quickly. "Start with this one. It's just a shirt box. Shouldn't be too tough."

I cut a semi-straight strip from the roll and joined each side to the box's middle with a single piece of tape. So far, so good. But here's where things always deteriorate. While attempting to fold half of one end into a nice triangular shape, the paper buckled in the middle. I used more tape to rectify that problem but the crease I had assembled on the end had disappeared. Furthermore, beneath the paper, the box was sliding away from me.

Eventually I brought both sides up and over the box's sides and sealed them with far too much tape. "There!" I proclaimed, even though a mild gust of wind would have opened the package.

My wife looked at my handiwork, sighed heavily and rewrapped the box in seconds. "It's really not that difficult," she said.