The Vow of Man's Best Friend: In Sickness and In Health 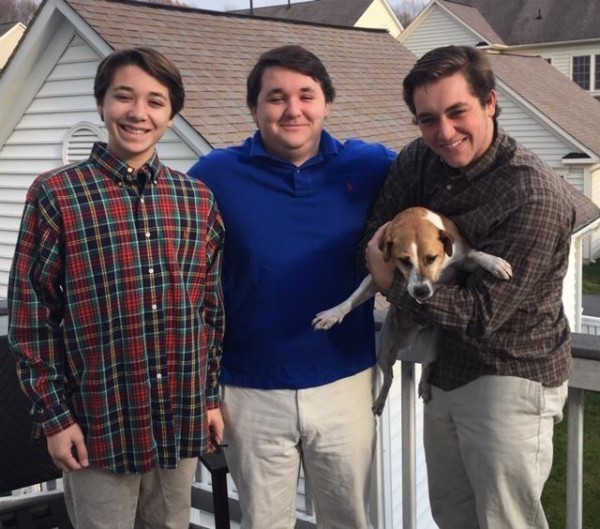 I sat in front of the veterinary oncologist and nervously fingered the scar on my neck. Although it was still raised and rough to the touch, one really had to examine it closely to see it. Chalk one up for the deft hands of my surgeon.

Yet, like so many scars, what was visible to the naked eye often belied the battle fought.

It had been exactly thirty days, almost to the minute since I had been diagnosed with cancer. And now, here I was receiving the news that our beloved dog, Murphy, was suffering the same fate.

My first thought was that this was surely the best dog EVER, I mean, how many dogs are in the trenches with you, taking the whole “man’s best friend” thing to a new level? My second thought, was for my boys. They were still adjusting to my surgery and treatment, so they were most likely too emotionally taxed to withstand this update.

Well, at least I assumed they were. I had no reaction to go on really. No one had actually broken down or talked about what was going on with me. I asked probing questions, made it a point to be transparent and still--nothing. Perhaps that is part of the whole teen boy thing; feeling like they had to be strong when I needed it. Just seeing me languishing on the couch day after day was a jarring change from my normal hectic pace.

Although, they certainly weren’t witnessing any self-pity from me.

The statistics for thyroid cancer were overwhelmingly positive and I was nothing but optimistic that I was going to be just fine. However, the reality is that there is no good cancer, so even the word itself took everyone’s mind to a dark place, however briefly.

My husband and I conferred about the best way to relay Murphy’s diagnosis to the boys. He had a mass in his lung which we had decided to remove surgically. Once the pathology provided more details, we would formulate a plan for treatment or comfort or both. The oncologist was fairly confident that the cancer had spread; which was the norm with canine lung cancer.

The news hit my kids like a tidal wave, they simply could not get their footing under the pull of this information. Amid tears, they asked all the questions we really didn’t have answers for while hugging their pup tight. It was a visceral reaction and more than we had anticipated.

But then I had an ah-ha moment.

The dog’s diagnosis gave them a reason to show some honest emotions without me feeling guilty. It gave them someone to dote on without worrying me. It gave them an outlet for all they had been feeling but held in to protect me. It was ok to be devastated about Murphy; no one needed to be silent and strong, They finally had permission to show a chink in the armor.

The boys were distraught in the days leading up to surgery as we all feared the worst. But we were given reason to be cautiously optimistic which was a place we were all familiar with.

Surgery was successful but quite invasive so we prepared for a slow recovery. Much to everyone’s-- mostly the oncologist’s-- amazement, the cancer had not spread outside the lung lobe which was removed.

If ever I needed proof that this episode was purpose driven, the illogical, against-all-odds containment of disease was it.

My boys lavished attention and care on Murphy as he convalesced. The heaviness in the house lifted as he regained strength and slowly returned to his normal habits. The kids were witnessing cancer remission first-hand with an initial prognosis much more dire than mine. It gave them a reason to believe that I was going to rise from the ashes as well.

Murphy gave my boys something that we couldn’t. He gave them hope. He gave them a horizon to focus on when the future seemed shrouded in dark clouds.

It has been a long journey to health for Murphy and me, but on our early morning walk we often witness the sun as it greets a new day. With each sunrise, I give thanks and realize we are quite a lucky family with both of us starting to think less and less about our scars.

A Love Letter To My 'First Born'
Smiling Smurphy
October