Published by The Mommy Rundown on December 7, 2017 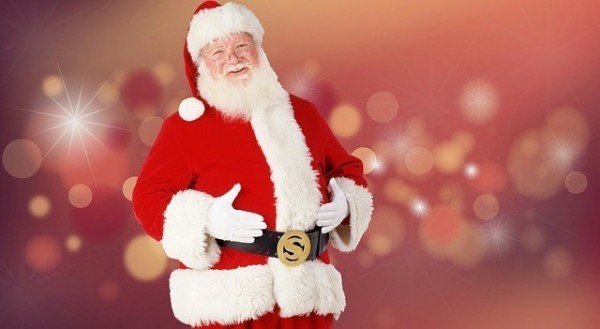 The holidays can be so stressful... dealing with shopping, baking, waking up in a cold sweat when I realize I forgot to move the darn elf, and oh yeah, dealing with the Santa interrogation.

Up until this point, I’ve been able to play the Santa thing with no problem. No questions. No doubt. My kids just took everything I said about Santa as gospel.

He lives at the mall until Christmas Eve.

He has elves who go to Target while the other elves stay at the North Pole to make the toys Target doesn’t sell.

He manages to come down the chimney without setting the alarm and yes he eats ALL the cookies ALL the children everywhere leave him. That’s why he’s so big.

But, this year, both of my girls want to know more about this man we call Santa. Anyone who knows me can tell you I don’t have a poker face. So, lying is not my specialty. But, for the sake of Santa and all things Christmas, I do my best. I think it’s working… well, sorta.

My 8-year-old has been asking me about all the other “pop-up” Santas we’ve been seeing at different craft fairs, tree lightings, and other events.

At the risk of having her believe that Santa runs around all over and leaves his post at the mall, I answer, “Right, those aren’t real. They just help Santa because they know he’s so busy. They’re kinda like elves, but just a step up.”

“Yeah mom, that’s what I thought. But the one at the mall is the real one, right?”

“Of course, the mall Santa is the real deal.”

Now the trick is to only go to one mall so they don’t see all the other ones. Oh yeah, he sleeps in the food court at night too… no I didn’t say that, but I wanted to.

Whew! Dodged that one.

Now my 6-year-old is getting in on the action.

“Mom, how does Santa make it to all the boys and girls on Christmas Eve?”

Why, why do you want to know? Think fast…

“It’s part of the magic of Christmas. No one really knows.”

Silence. No response. She may be on to me.

“Mom, what does Santa do when it’s not Christmas?”

“He takes a nice vacation because Christmas makes him so tired.”

That was an easy one.

“How does Santa know where we live?”

No, really, “He just knows. Santa knows everything.”

Exit children from the table.

The Santa Interrogation is over… for now.

Although the endless questions can get a bit much, I know I'm going to miss this time. When else can I tell my kids that it's OK to sit on a strange old man's lap and it's even more OK to let him break into our house once a year to leave presents without taking one thing? What’s even better is that he knows when you’re sleeping and knows when you’re awake, so don’t bother sleeping with one eye open because he’ll know that too.

Christmas truly is a magical time, isn’t it?

Moms, Just Say NO to the Santa Wars!
The Real Santa Claus
Why I want my kids to believe in Santa
advertisement

Moms, Just Say NO to the Santa Wars!
The Real Santa Claus
Why I want my kids to believe in Santa