The Perfect Birthday Party Starts with One Question

Published by Tracy Cutchlow on March 2, 2016

"Oh, so this for you, then?" That's what my neighbor said when I told him a) I was thinking about a Lorax themed birthday party for my almost-3-year-old, and b) she'd probably be happy if the only decor were the three big, white balloons she'd chosen herself that morning.

His words replayed in my head. I wanted the party to feel special. But for her--not for my own sake. I knew I was in dangerous territory because of my status as a recovering perfectionist. (You, too? I have a survey for you.) And because, well, once you look for party ideas on Pinterest, there's no end to the potential over-the-topness.

So I kept those words in mind at each step. "Oh, so this for you, then?" Here's how it went. Consider this my guide to birthday party planning for recovering perfectionists.

First, I asked my daughter if she was interested. The Lorax is one of her favorite books but, you know, 3-year-olds have their whims. "What do you think of a Lorax party for your birthday?" I said. "I was thinking we could make some Truffula Trees." Her eyes lit up. So we went forth. 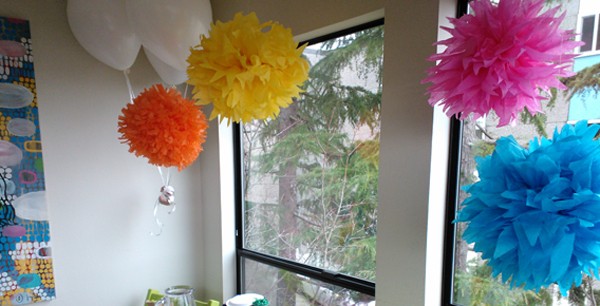 "Mama, we're making Truffula Trees!" My little girl was over the moon as we folded and pulled apart some tissue paper to make colorful balls (here's how). "Now the pink one. Then the blue one," she directed. Doing it together was not only more fun, it felt like the first step to making sure this party really was for her.

1. OK, so the first tissue pom you make doesn't look like the one in that picture you saw online. Don't toss it. Move on.

2. OK, so the second tissue pom you make isn't that reminiscent of a Truffula Tree. Don't toss it. Keep going.

The Lorax party photos I saw online featured junk food: Swedish Fish for Humming-Fish, Peeps for Swomee Swans, Teddy Grahams with marshmallows for Brown Bar-ba-loots, and some sort of red liquid masquerading as "Seuss soda." I wanted healthier food that would be just as easy. 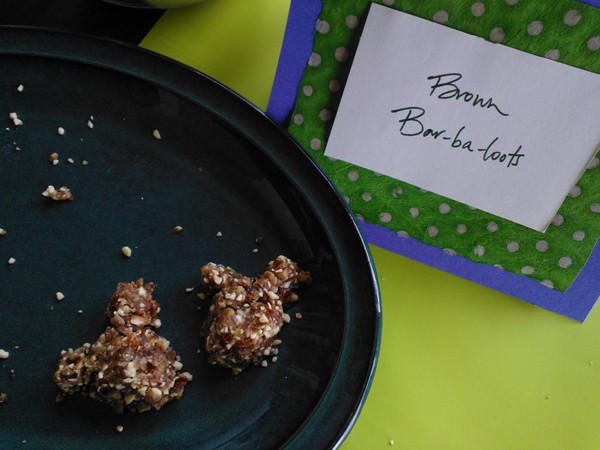 1. When you send your husband out to buy the food, don't panic when he comes back and says, "I made some executive decisions." I mean, panic a little. But then breathe deeply. Act flexible.

Instead of little sandwich rollups, he buys one of those huge submarine sandwiches that 3-year-olds can't fit in their mouths? OK, scrap the Lorax connection. The sandwich will be for the adults. Whip up some PB&J for the kids. Instead of funky, rumpled Sumo oranges, he buys little Mandarin oranges? Oh well, close enough. Cheaper, too. Instead of the requested amounts of dates and cashews, something less? ("I thought it looked excessive.") Um, OK. We'll make what we have.

2. Food isn't completely put together ahead of time? You're in luck. Turning the Bar-ba-loots into an edible activity will be more fun. You just toss dates and cashews into a food processor and smush the result between pieces of parchment paper. (Here's the recipe.) Guests can then roll small balls, shape them into teddy-bear heads, and eat 'em. 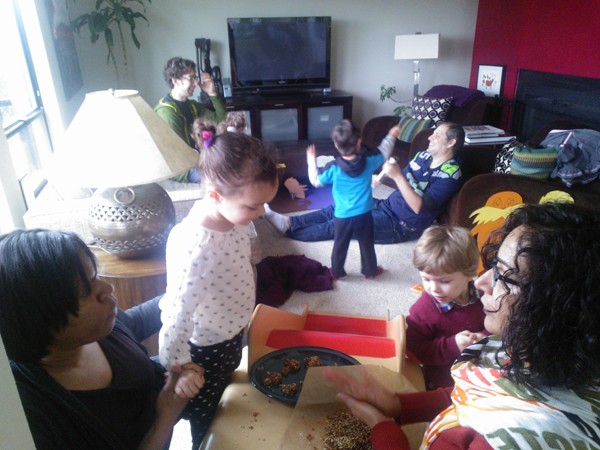 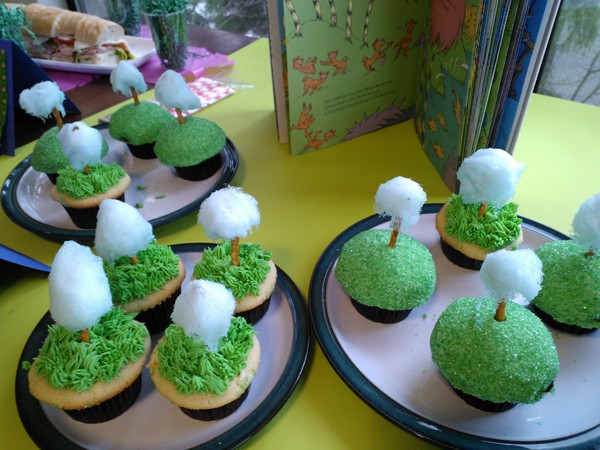 1. Buy the cupcakes, if making your own would mean staying up all night. They can even do a nifty grass frosting.

2. Don't bother decorating the cupcakes with Truffula Trees (poke in a pretzel stick; top with a tuft of cotton candy) before guests arrive. Moisture in the air will cause the cotton candy to crystallize and droop within an hour. If it happens, look on the bright side. You probably didn't want your kid eating that much sugar anyway. 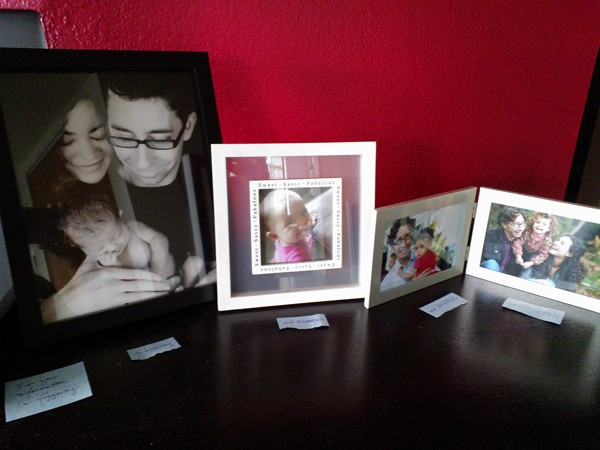 A few other things around the house fit with the Lorax story, I noticed, and it felt nice to include these personal touches. A knitting needle stuck into a ball of soft yarn, from my daughter's school. A photograph of a smoke-belching factory in the distance with a dark and barren field in front of it, bought when we lived in San Francisco. 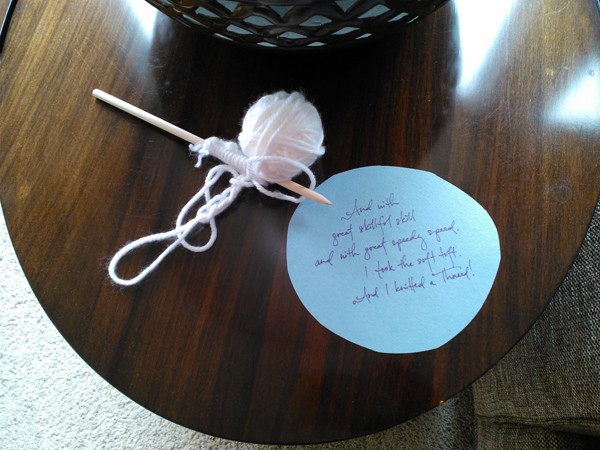 It might have been fun to do a reading of the book, walking around to the different stations and passing the book among the parents.

But we couldn't, because the kids were utterly engrossed in this: 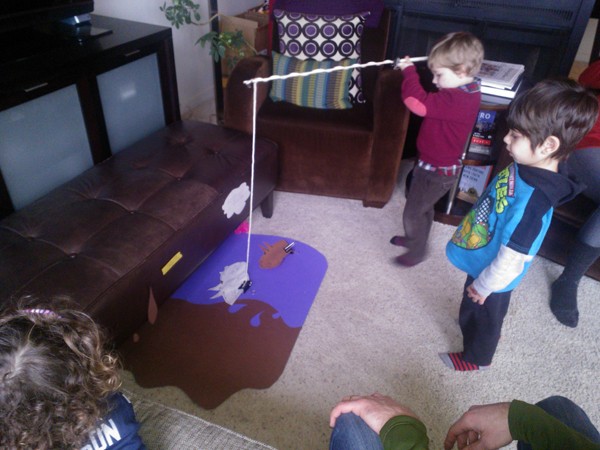 Rescuing Humming-Fish from the gluppity-glup (also schloppity schlop). Few things are apparently more fun than this, my friends. The kids fished the Humming-Fish out of the brown pond and set them over on the blue pond. Putting a big binder clip on the bottom was more than enough to attract the fishing-pole magnet. Plus, the clip let the fish stand up from the poster-board pond, like in the book. Pretty cool. 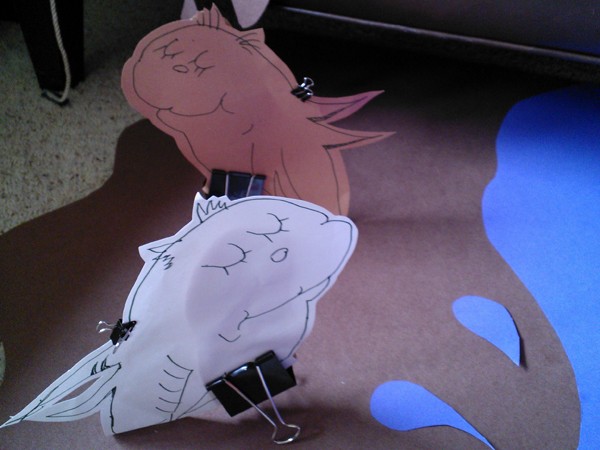 The kids whooped and cheered when one caught a fish. They wanted to go again and again. My daughter was still fishing three days later. At which point she bent the pole in half.

Tip for the recovering perfectionist:

Stop right there: I see you on the website selling printables. Dust off a pencil and draw. Let your kid draw, too, or hold your hand while you draw, or cut the paper. So what if your Humming-Fish look woefully weary. The imperfection and the effort and the teamwork are exactly what make the party personal instead of commercial. 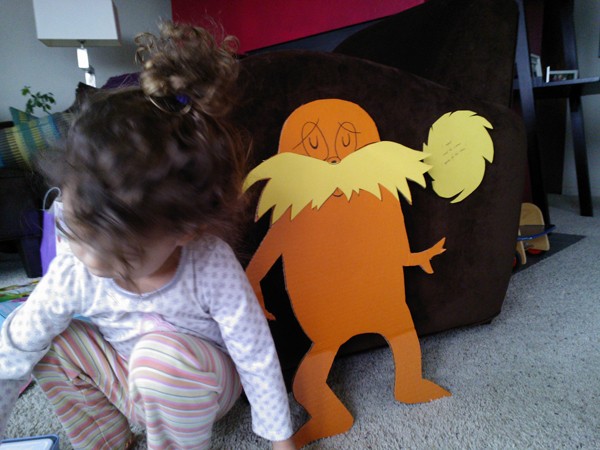 Several decorations did land in the "going overboard" category. In other words, I impressed myself by making them, but the kids didn't care that much about them.

"Mama! You made me a Lorax!" was my daughter's initial excited reaction to my orange corrugated-cardboard cutout. I'd read about one party where the kids enjoyed talking to the Lorax, but that didn't happen at ours. He got more exclamations from the other parents. 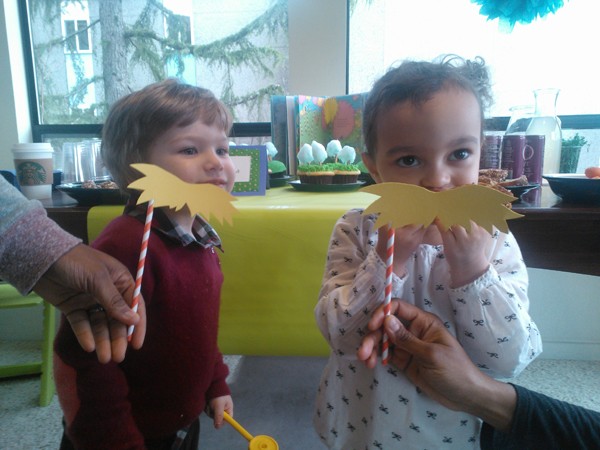 Also, the kids didn't want to take funny photos with yellow paper mustaches taped onto striped party straws. (Maybe if I'd had a mirror nearby?)

They didn't really notice the green felt arms of the Once-ler holding a tin pail--my sifter--with 15 cents, a nail, and the (paper) shell of a great-great-great grandfather snail. 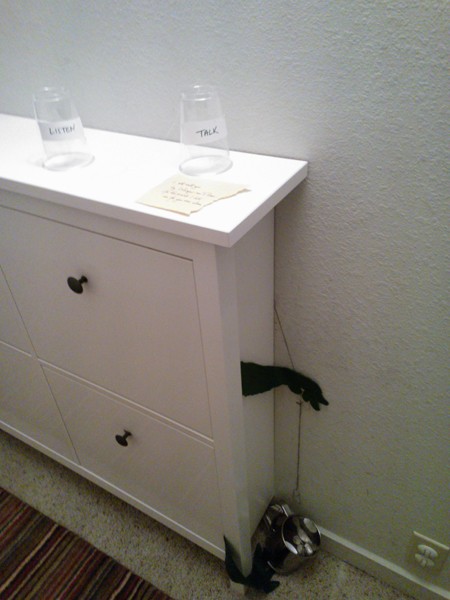 The Whisper-ma-Phone (sewing thread strung between plastic cups) was more of a hit.

Tip for the recovering perfectionist:

If it's not interactive, don't spend much time on it. 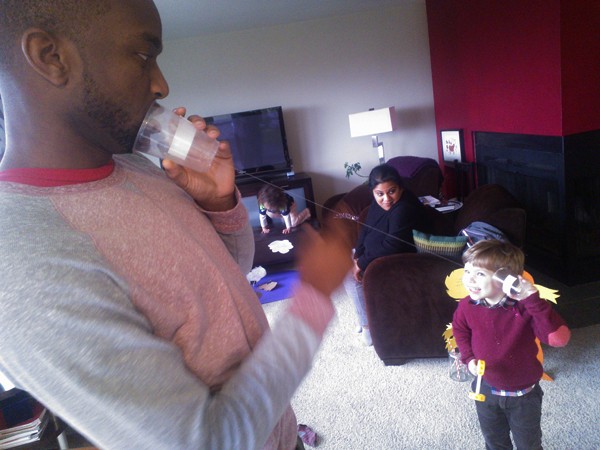 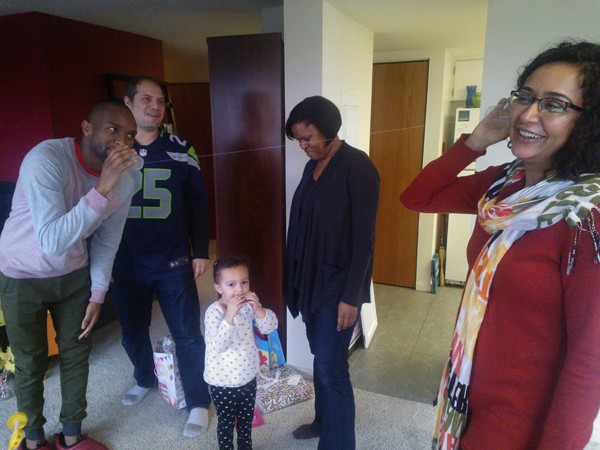 The last of the Truffula see--oops, never mind

Like Nina Badzin at Brain, Child, I'm not a fan of party favors. But as I was reading through The Lorax for ideas (because reading it 2,358 times hasn't been enough), I thought sending the kids home with a Truffula seed would be a fitting ending to the party.

I had leftover green tissue paper and some edible kuri-squash seeds I'd already roasted. On a paper tag I wrote, "Catch!" I bought little burlap bags, which I spotted at the balloon shop, to put the seed in. But if I'd been thinking, I would have made pouches out of folded newspaper. That way, the whole thing could have disappeared into the recycling bin upon arriving home.

As I solemnly presented the bag to one little guest -- "You're in charge of the last of the Truffula seeds" -- my daughter plucked out the seed and popped it in her mouth.

Guess we need to read that part of the book again. 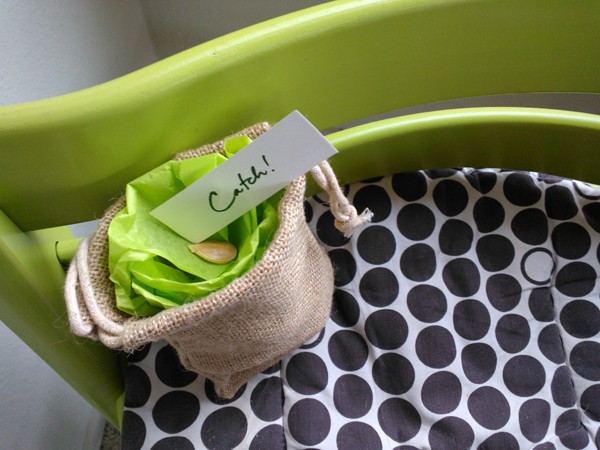 Oh: Those three white balloons she chose all by herself? They made lovely clouds, from way back in the days when the clouds were still clean. 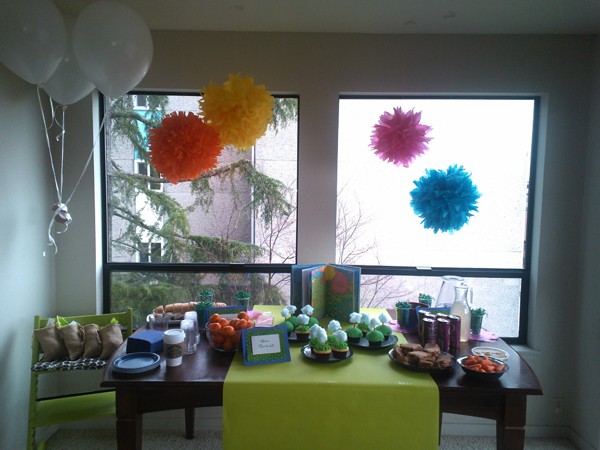 A great leaping of joy in my heart

My daughter's very first birthday was definitely a celebration. I made a huge tasty brunch for ourselves and our close friends. The theme was "Oh my god, we made it -- and we couldn't have done it without you."

Last year, her birthday party consisted of "Hey, if you're free this weekend, meet us at the Children's Museum." I thought I was being the anti-perfectionist party parent because of the lack of effort--er, the simplicity. But the kids scattered to play on their own. It didn't feel much like a playdate, let alone like a special day. At age 2, I didn't think my daughter would notice. But later, during a family dinner, when we lit a candle and sang to her, her face truly shone.

This would be the first year, I figured, that my daughter would remember her birthday party.

I don't know whether she will. (When a neighbor later asked if she had a fun birthday party, she replied, "I ate cupcakes!") But I do know the things these photographs don't show: the fun she and I had creating the decorations together. The way her eyes lit up as we talked and worked. The joyous time she had at the party with her three dearest friends (as did we with ours). 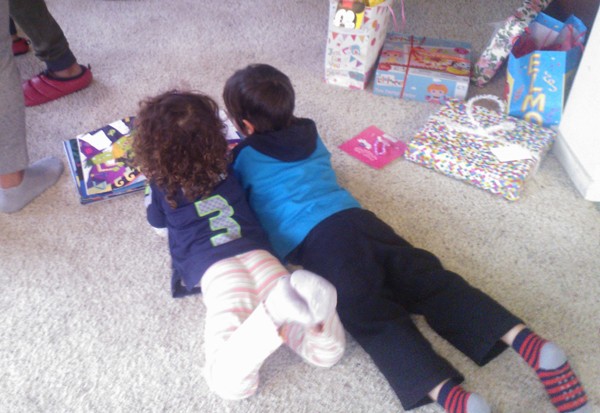 This last part is, of course, what really matters. Warm, intimate relationships are the key to happiness at any age. George Vaillant, the Harvard psychiatrist who led the Grant Study--an incredibly detailed 75-year study following 268 men from college age to old age--said this is what he'd learned: “That the only thing that really matters in life are your relationships to other people.” 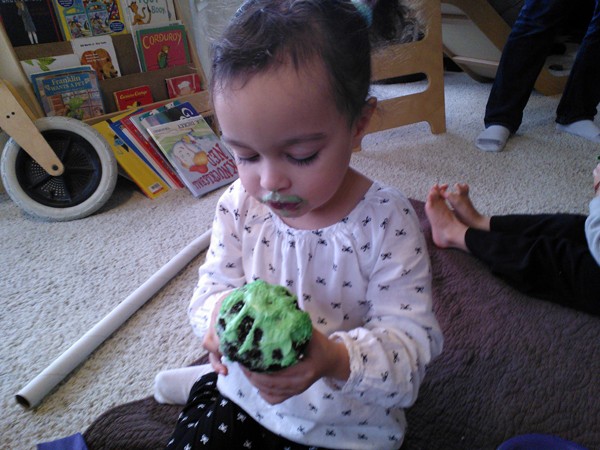 I'm taking a survey: Do you consider yourself a perfectionist?