The Parenting Lesson my Youngest Child Taught Me

Published by My Dishwashers Possessed-Kathy Radigan on August 28, 2018 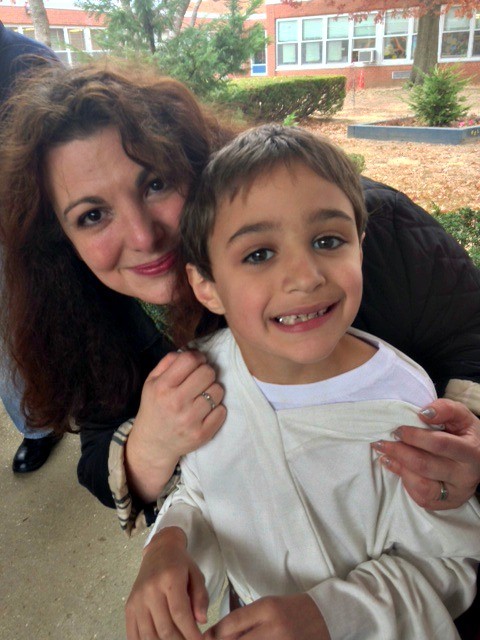 Our youngest child has always had a talent for building things out of just about anything he can get his hands on. Blocks, train tracks, vegetables, sticks, cups, or paper clips, are mediums he has used to create towns, castles, schools, and shopping malls. It’s not uncommon to see a trail of paper shreds leading to Peter sitting at the dining room table deep in thought as he constructs a four story apartment building using nothing but paper and tape.

This may be nothing special in most families, but in our family of people who can’t cut a straight line, it’s an oddity.

Seven years ago our firstborn came to me in a panic after seeing another amazing creation his baby brother made with his train tracks.

“Mom, do you think it’s possible Peter was switched at birth?” He said this with a completely straight face. He was really worried.

“No Tom, your brother wasn’t switched at birth.”

Though I have to admit when I went downstairs and laid eyes on the complex configuration of bridges, buildings, and tracks my five-year old created, I was glad that at least one person in my family might end up handy with tools. Dreams of a son who could build me a second floor one day, or at least fix a sink, danced in my head.

My Poor Tom. He’s been able to name every president since he was four years old. You could give him the year you were born, and he could tell you who was in office. (Don’t think I didn’t pull out that party trick every chance I got.)

He knows every Beatles song ever recorded. In fact he’s a wiz at rock-and-roll history. He can even outsmart his sports-loving father about the World Series winner or Super Bowl champ in any given year.

But he couldn’t build a tower if his life depended on it. He has the hardest time with fine motor skills. Just like his dad and I do.

I must confess Peter’s fine motor ability didn’t just confuse Tom. It throws me a bit too. I was unaccustomed to having a kid whose talents were so foreign to his parentage.

He’s my son though. He demonstrated this a few minutes later that same day.

“Peter, what is wrong? Why are you so upset?” I say as I’m running down the stairs, afraid that he fell or that his brother or sister were on top of him “playing.”

“We did nothing to him,” Thing One and Thing Two said in unison as I reached the bottom of the stairs.

“He has this whole city built, and he couldn’t get one little piece to fit, and he completely lost it,” Tom said.

“Well, you see honey, he’s my child!” was my somewhat relieved response.

I may not be able to build, but I can certainly relate to at least wanting to lose it when something I’ve been working on doesn’t go my way. My parents love to recall stories of how I would rip up a picture if I didn’t think it was just right.

Perfectionism has always been my middle name. As it is for Peter.

As a girl with dyslexia growing up in the 70s and 80s, I always felt like a misfit. My sisters were athletic and could do cartwheels and backbends with ease. I could not. I thought if my kids could run fast, play ball, and dance well, surely their lives would go smoothly.

Above all I just hoped my poor test-taking ability and dyslexia would skip a generation or two. Since my husband scored 1400 on his SATs, I hoped this would ensure at least one of our kids wouldn’t struggle with school like I did.

This theory has proved faulty.

All three of our children have had to deal with different learning issues. Tom has dyslexia and Peter struggles with ADHD. Then there is my sweet Lizzy, who has significant speech and developmental delays.

I desperately wanted my kids to have an easier time dealing with the world than I did. I didn’t want to see them struggle with the simplest tasks. I didn’t want them to ever feel they were put on the wrong planet like I often did when I was growing up.

In my 18 years of motherhood, I’m learning almost on a daily basis that being a parent isn’t about righting the wrongs of my childhood, and it isn’t about providing a struggle-free existence. It’s about teaching my kids to handle that which comes their way with the talents they possess.

I may not be able to build with blocks to save my life, but I’ve learned that I’m really good at building metaphorical bridges to navigate the world successfully. And that’s one skill I can pass on to my children.

This piece was previously published on Kathy's site, My Dishwasher's Possessed! And check out Kathy's newest project, Every Family's Got One (a story that is)

Why My Special Needs Family Stopped Going to Church
My Family is Like Everyone Else's, Except When it's Not
Moms, we're all familiar with 'the guilt market'
advertisement

Why My Special Needs Family Stopped Going to Church
My Family is Like Everyone Else's, Except When it's Not
Moms, we're all familiar with 'the guilt market'