The only plane I have ever contemplated jumping out of

We had already taken a trip to Greece once before with my oldest when he was 18 months old. Honestly, we didn't even bat an eye at the idea of traveling internationally with him. He rose to the occasion and was better behaved on the plane than I was. This was a different time though. While my ability to travel for 16 hours had hopefully improved, I had real concerns about our 3 year old.

You see, out of all three boys, the youngest is one that doesn't exactly go with the flow. He is more of a swim against the current kind of kid. He was born with a strong will and spirit, while also lacking a redirecting option. Even still, I remained naively optimistic.

Embracing my strong need for planning, I thought it would be a brilliant move to introduce him to the idea of being on a plane by taking a short flight a few months before the big trip. Since my husband could not get away from work, I decided to take a solo trip with all three boys to Myrtle Beach and visit my dad and stepmom for spring break.

It is, literally, a one hour flight and I felt confident that I could handle anything that could possibly be thrown at me for 60 minutes. I was prepared... heading into war prepared. In addition, I had two soldiers with me: My older two boys. Everything was moving along smoothly, until we sat down in our assigned seats and the crying began. Screaming may be a little more accurate. Screaming, in row 12 - seat B, as if he were injured and lying on a battlefield with only a shot of whiskey as I amputated a limb.

My older son, who was seated in the row in front of us, promptly put his earbuds in, did not make eye contact the duration of the flight and acted as if he had no idea who we were. My middle son, who was seated in the row with my youngest and me, looked on in horror as the color quickly drained from his face. The rest of the passengers, although very kind in their offers of candy and help, quickly retreated to their seats in defeat. The screaming and crying continued for about 30 minutes until the plane took off, at which point he fell asleep. Unfortunately, the relief was short-lived and he immediately picked up where he had left off with about 15 minutes left in our flight. Upon landing, I sent my dad a photo I had snapped during his performance intermission, with the message "I am going to need a drink and please, make it strong." 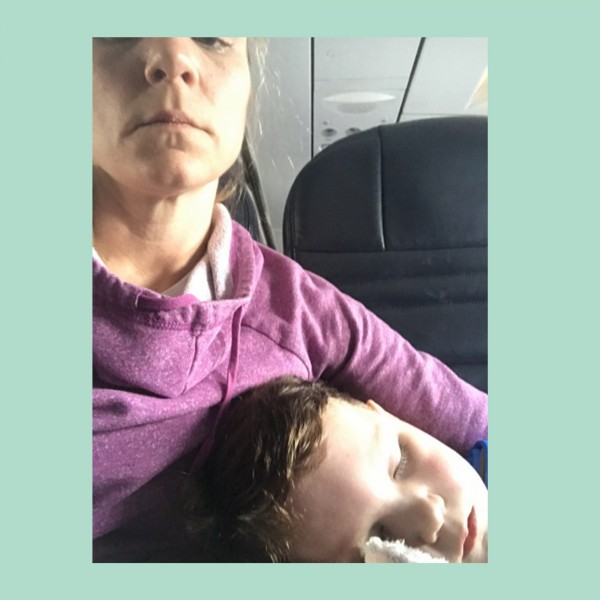 As we stood up to exit, I quickly announced to the plane "If anyone would like to travel with us again, we head back to Baltimore on Saturday." They chuckled, I cringed.

This is the exact story I relayed to my husband, in addItion to voicing my concerns about future air travel. I kind of got the feeling he thought I was exaggerating the situation. That is, until we entered the plane headed to Greece a few months later.

Imagine you have a friend that keeps asking you to get on the tallest, fastest roller coaster that exists. You have already taken a ride on this roller coaster. You're sure it is a bad idea. You know the friend may never recover from the terror but the friend keeps insisting that there isn't a roller coaster out there that could be that scary. "Let's do it," you say and ride the roller coaster, against your better judgment. Just as you inch to the top, you're frightened but also a little giddy at the idea of watching your friend become paralyzed with fear while at the same time realizing that you were right. When the ride ends and comes to a halt, you promptly look over and tell your friend, as they vomit, "I told you so." Now, imagine that ride lasts 8 hours, takes place overnight, and everyone else on the ride wants to punch you in the face, especially the French woman seated behind you. That was our plane ride to Greece.

We sat on the runway for a good hour, lengthening the duration of combat time spent on this battlefield. My husband's expression appeared similar to how I picture his face if we were, together, in the middle of a desert, with no water and our heads on fire. My oldest followed his foolproof method of acting like he had never met us before and our middle son followed his lead this time. I was sure that if we could just get in the air, he would fall asleep and victory awaited us. In addition, I had prayed to God for his mercy and given him a dose of children’s Melatonin before we boarded. Before I receive some sort of backlash for giving Melatonin to a 3 year old, I consulted our pediatrician beforehand and suspect had she been traveling on our flight, she would have chosen to prescribe a Quaalude instead.

In between screams, passengers kept throwing lollipops to me like I was some type of amateur mother who would board an international flight without a backpack full of candy, toys and activities. I felt their pain and the flight attendants on AirFrance felt mine. They were so kind, understanding and helpful. I highly recommend flying with them if you have an uncooperative, feral-like family member. The French lady seated behind me.... not so much. I ignored her as she rolled her eyes while huffing and puffing after each one of my failed attempts to console him. I understood that this was a difficult situation, but being a jerk wasn’t helping and certainly wasn’t changing a 3 year old's position about not wanting to be on a plane.

At last, we take off and just as I had suspected the little one falls asleep, albeit with 90% of his body sprawled across my lap and chest. Looking back, I should have been willing to hold a plank with him sleeping on my back for the seven-hour flight, if it ended any sound exiting his lips. I don't know whether it was the scoliosis in my back or the feeling like I had just gone 12 rounds in a boxing ring, but in any case, I decided that two inches of recline could possibly provide me with some comfort and relief for the remainder of the overnight flight. It just so happens that, unbeknownst to me, the woman behind me was attempting to get up from behind at the exact time I had chosen to recline. I call it Karma. She chose the term "bunch of animals" in French, which I understood crystal clear from studying French in high school and college.

I spent 30 unsuccessful seconds attempting to conjugate French verbs before abandoning my efforts for English and yelled out "I am not an animal, lady, you're an animal!" At which point my husband, who was seated in front of me, turned around in horror and asked what the hell I was doing. I explained the situation, strategically increasing my volume when confirming that "I understand French" all while staring her down as she stood in line for the WC. This may in fact have served as the metaphorical point on the roller coaster ride where my husband realizes I was right.

What I can tell you from this trip is, if I am ever seated behind you on the other side of the same experience, feel free to recline that seat all the way back, sister. Need a drink? I got you. Want me to start a collaborative, passenger rendition of Joy to the World by Three Dog Night to drown out your child's cries? I am on it, because Jeremiah isn't my only friend. Anyone in your position is also a friend of mine. And if by chance someone so much as looks like they may grab a phone to record your agony, I will knock that bad boy out of their hand with the warrior mastery of a Feudal Japanese Ninja. I got you, weary traveler.

Because sometimes you must walk through the dark to get to the light, even if that light is dim and far away, looking down from the window of an airplane. 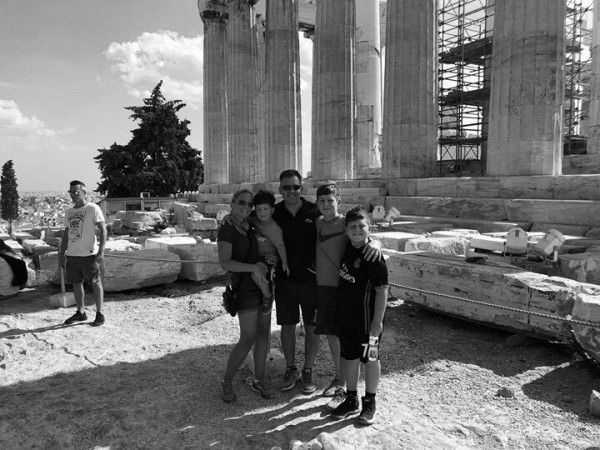 Life Took a Dangerous Turn Before I Got My Best Friend Back
Our Kids Caught Us Having Sex: A Hilarious Lesson of Parenthood and Intimacy
Finding the Village Along the Way
advertisement

Life Took a Dangerous Turn Before I Got My Best Friend Back
Our Kids Caught Us Having Sex: A Hilarious Lesson of Parenthood and Intimacy
Finding the Village Along the Way