The One Resolution to Rule Them All

It’s that time of year again. 2015 is drawing to a close and people are contemplating the clean slate they're about to be handed.

Last year I failed pretty spectacularly at my resolutions (no surprise there), so this year I hadn’t given much thought to them… until the other day. 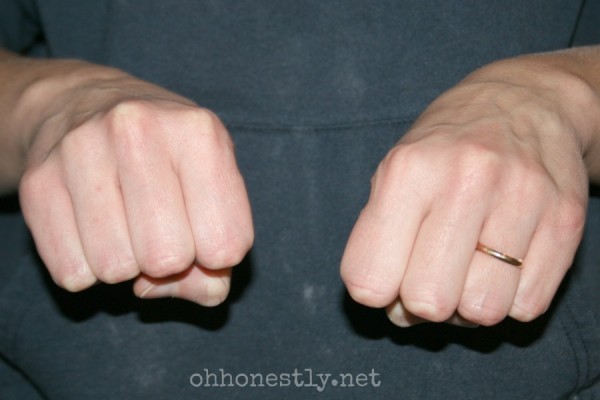 My son and I sat on the window seat at my in-laws’ house and played the game where you hide something in one fist and the other person guesses which hand holds the item. The twist was that I had dropped the item behind me and each hand was empty.

Eli guessed time after time, each time revealing an empty palm. As time went on, I wouldn’t even put my hands behind my back to ‘swap’ the imaginary item before holding them out to him again, but he was oblivious, giggling and smacking the top of my fist, over and over.

He wasn’t the only one giggling. By the end of the game we were both in tears, not because it was even that funny of a joke, but because we were just having fun together.

That was when it hit me: How often do I laugh like that? I could specifically remember the time before.

It was Thanksgiving day at my parents’ house. All the girls in the family were cracking up about one of those awkward family photos we'd found. Then my cousin and I systematically swiped everyone’s phones and changed their Facebook statuses to something harmless, yet slightly embarrassing.

Was it juvenile? Sure. But is behaving like a kid every now and again such a bad thing? At what point do we start taking life so seriously that we stop having fun?

The fact that I could look back and specifically remember the last time I’d had a good laugh was telling. Clearly I don’t do it enough.

So this year my New Year’s resolution is simple:

I want to laugh more.

Little giggles; big guffaws; the silent ones that are accompanied by tears rolling down your cheeks; the ones that catch you by surprise and shoot snot out your nose. However it happens, I want to LAUGH!

I have a feeling that if I keep this simple resolution, I’ll find benefits in a lot of the areas people usually make resolutions in: Being kinder, improving relationships, looking younger, being healthier…

Hey, maybe this will be the start of a new dieting craze! It sure beats cutting out carbs.

The 4 S’s to Setting Resolutions that Stick
No Resolutions for Me! Why I'm Choosing One Word Instead.
When was the last time you peed your pants?
advertisement

The 4 S’s to Setting Resolutions that Stick
No Resolutions for Me! Why I'm Choosing One Word Instead.
When was the last time you peed your pants?