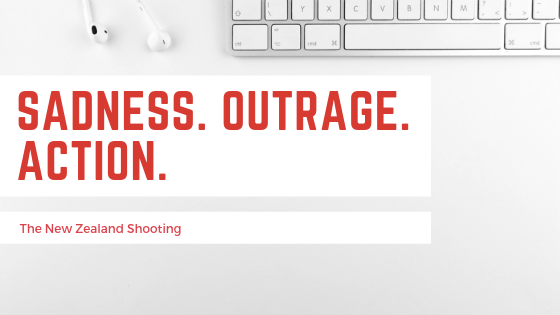 As news spreads about the horrific terrorist attack in New Zealand, the list and level of tragedies unfolding feel never-ending. There are simply no words for what happened in Christchurch, New Zealand. And while we attempt to process how to turn our anger over tragedies such as this into action, I'm thankful for the many resources available as we try to explain this stuff to our kids. We can't ignore the conversation about violence—because it keeps happening.

With violence and hatred, sadness and shock can quickly turn to outrage and, as in this case, spur questions like, how are we going to make the Internet a safer place? How do we talk with our children about tragedies in age-appropriate ways? How do we prevent gun violence from happening again?

While I don’t have all the answers, I hope you’ll join me in trying to turn energy into ACTION.

Thursday night, news of the New Zealand shooting was delivered first to me via social media. An intended “quick check” of my newsfeed after the kids’ were sleeping soundly suddenly turned into something that continues to weigh heavily on my mind.

As a proud supporter of the gun violence prevention movement here in the United States, my heart immediately sank. Every day, nearly 100 Americans are shot and killed, and hundreds more are wounded. And no matter where tragedies take place around the world, our hearts go out to those whose loved ones were shot and killed and whose lives were cut short or taken by gun violence.

When hatred comes armed, it is deadly. We stand with New Zealand, unified against hate in all its forms. — Moms Demand Action for Gun Sense in America

It wasn’t until Friday morning that a fellow member of an online digital parenting group brought up an additional layer to this already horrifying tragedy. Their post read: 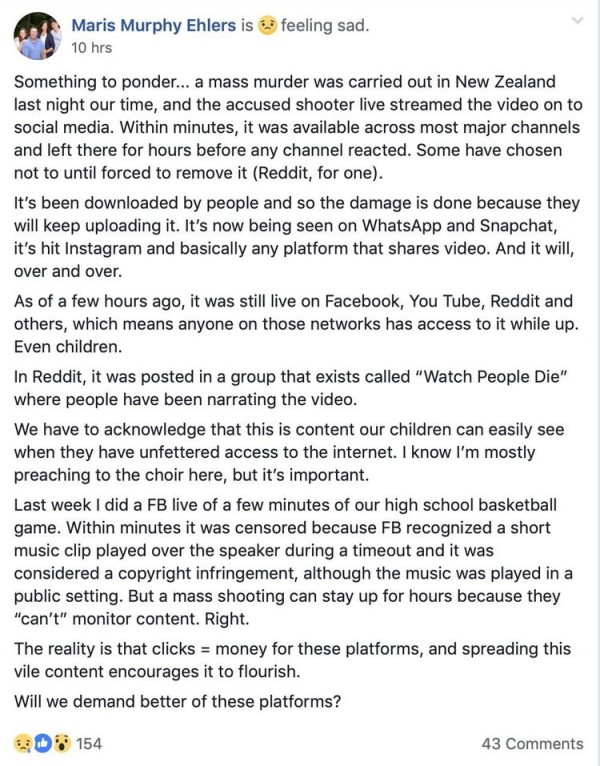 The sadness and shock of the situation, one that we feel all too often due to violence and hatred, turned to outrage as the Trepid Tech Mom in me boiled over. How could this awful tragedy be livestreamed? How could it take so long to take down—especially since these social media platforms are so quick to censor seemingly harmless content? How WILL we demand better of these platforms?

Yes, social platforms have an enormous job to monitor user content. But it’s still their responsibility. They must do better. And I’m convinced they can do better.

Rant is coming as I echo this parent’s concerns.

The other day, I commented on a Facebook thread (that discussed digital parenting) with a link to Trepid Tech Mom content. Seemed appropriate to me but within moments my comment was removed because it violated Facebook’s policy of self-promotion. In the post above, the parents’s livestream of their child’s high school basketball game was censored within minutes because Facebook detected a song and claimed copyright infringement. Okay. If these are things Facebook wants to “flag” and remove, that’s fine. But if they can detect “self-promotion” and “copyright infringements” within moments, it seems a tough argument they can’t detect gunfire and put a stop to it right away.

There are many statements made in the above Facebook post, some of which have since evolved. For example, Reddit has apparently banned the video since this post. But it’s too little too late. Video of this horrific tragedy has been downloaded countless times. The damage has been done. The Internet will never be free of this footage. The social media giants have failed—again. And there’s plenty of conversation to prove it:

How the Christchurch terrorist attack was made for social media — CNN

In fact, the entire attack seemed orchestrated for the social media age. Before it took place, a post on the anonymous message board 8chan -- a particularly lawless forum that often features racist and extremist posts -- seemed to preview the horror. It linked out to an 87-page manifesto filled with anti-immigrant and anti-Muslim ideas, and directed users to a Facebook page that hosted the live stream. Posts on Twitter also appeared to herald the attack.

"This is one of the dark sides of social media, and something that's almost impossible for the companies to do anything about. They're not going to be able to block this material in real time," said Paul Barrett, deputy director of the NYU Stern Center for Business and Human Rights. "It's a real conundrum about the dangers that social media can facilitate."

"It is not just a question about broadcasting a massacre live. The social media platforms raced to close that down and there is not much they can do about it being shared because of the nature of the platform, but the bigger question is the stuff that goes before it," said Dr. Ciaran Gillespie, a political scientist from Surrey University.

So what do we do with all of this anger and energy? We do our best to honor with action.

May we demand social platforms “do better” when it comes to keeping fans and followers—our children and families—safe online and off and advocate for kids' well-being in the digital age.

ON TALKING WITH OUR CHILDREN.

May we learn how to talk about tragedies with our children in age-appropriate ways. We can't ignore the conversation about violence—because it keeps happening.

ON TAKING CARE OF OURSELVES.

May we all make an extra effort to spread a little kindness today and always. It doesn’t have to be elaborate or expensive, but every little bit helps.

May we fight gun violence in all of its forms to keep our families safe.

May we Be SMART for Kids and bring together all responsible adults to reduce suicides and the number of unintentional shootings that occur when children get ahold of an unsecured firearm.

Today and always, may we turn our energy into action. Stay safe and thoughtful out there, Trepid Tech Mom. And let's help our kids do the same. We’re in this together. You are not alone. 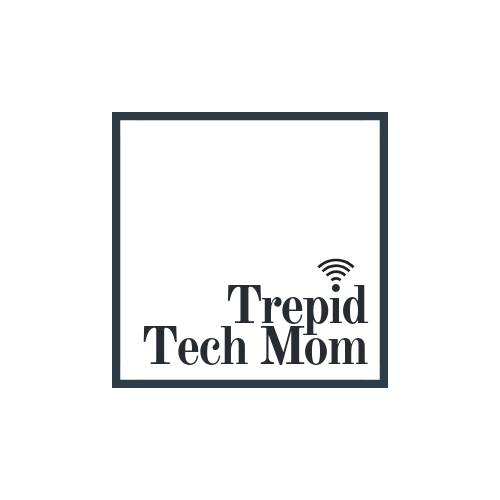 Kids & Toy Guns - Should We Be Worried?
Language has always mattered. We can help our children understand just how much.
It's Time to Start Walking our Anti-Bullying Talk
advertisement

Kids & Toy Guns - Should We Be Worried?
Language has always mattered. We can help our children understand just how much.
It's Time to Start Walking our Anti-Bullying Talk