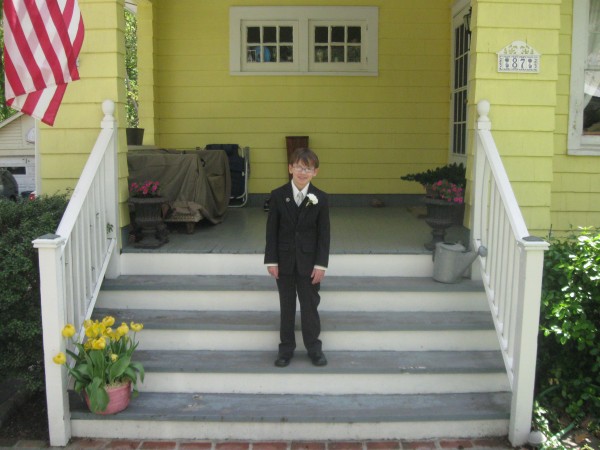 I survived, which wasn’t a given at the outset. It may have been the longest, most trying week of my life, and there may have been some close calls, but never once did I put my head in the oven or blow my brains out as is the only reasonable response to the sheer lunacy that is the never ending elementary school graduation celebration.

I have my battle scars, mostly on the inside, which is why no one can see them, but they’re there nonetheless. I have suffered. Suffered because the preparations for this one, not particularly momentous, year-end occasion really started back in September. It’s not just a week long marathon. The 4th grade graduation celebration is a blowout blitz a year in the making.

When I first started receiving the non-stop emails from the PTA at the beginning of the school year I could handily ignore them because, one, I didn’t give a shit and, two, the festivities were 10 months away. But preparations start so early because in order to get the yearbook up to the proper PTA standards, the 4th grade yearbook committee has to hit the ground running in September.

Yes, I did say a yearbook. For 4th graders. The same fourth graders who are leaving the elementary school, walking two steps over and entering the middle school. Fourth graders who will be attending middle school with the same exact students with whom they attended elementary school. These fourth graders need a yearbook. Apparently, the PTA thinks the kids will forget everyone they’ve spent their entire academic lives with over the course of a few summer months. And, now, they will have such a yearbook to remember all the good times – when they went to the prom and got their driver’s licenses – with the kids they’ve always been stuck with and will continue to be stuck with for the remainder of their school days.

But it’s not just the yearbook. Perhaps the yearbook would be understandable or at least tolerable if it wasn’t for everything else. In addition to the yearbook for which I received no less than 25 emails and for which parents were told to submit at least 5 and as many as 20 photos of their precious children, there was the special 4th grade trip to a water park, the 4th grade pool party, the 4th grade breakfast, the 4th grade graduation ceremony and finally the fourth grade cheer on the last day of school.

Any one of these things would have been plenty. But six, six, celebrations? And no one of these events are ever your garden variety, run of the mill celebrations. No, they must be bigger and better than what any fourth grader should expect or deserve.

Take the water park trip for example. It’s not enough to skip a whole day of school, replacing it with a fun fest at a water park. No, the children must also be provided with t-shirts for their classmates to sign. Don’t get me wrong. It’s a cute idea, but when The Kid went through this whole ordeal a few years ago the 4th grade water park committee got a few econo-packs of two dollar Hanes, one-size-fits-all undershirts, threw them on the picnic table and said, “Have at it.” This year the committee decided to special order t-shirts emblazoned with the school emblem, each child’s name and each kid’s favorite team or sport’s figure number. And since I didn’t know any of this because I promptly delete all nonsensical school emails, they had to hunt me down and wrangle the information out of me.

Then, there’s the pool party, which comes complete with a DJ, pizza and ice cream, and aside from the DJ, would be fine except that for all of these events parents are required to donate the supplies. I don’t have a problem with donating a watermelon or two, but with six events the requests are endless. It’s not the money aspect I object to either, it’s the running around and remembering and carting in of stuff on the correct day. Ain’t nobody got time for that. Or at least I don’t. I’m too busy trying to get my kids to pass school and be decent human beings, which really takes up an inordinate amount of my time.

Maybe it’s just me because, apparently, there is no shortage of moms who will jump at the chance to run obsequiously behind their children in an attempt to make their little lives as wonderful and special as possible.

The ceremony is two hours because that’s how long it takes to scroll through the entire contents of the yearbook, which is projected onto a large screen in the auditorium and set to a saccarine soundtrack so that every parent in the room can bear witness to every blessed thing every blessed 4th grader in the entire blessed school has done in his or her life, well, up until the age of ten, anyway. Can you imagine how long it will be come eighth grade?

Then there’s the awards. Oh, the awards. And trophies. And certificates, and finally the kids are given their copy of the yearbook, which comes with a commemorative DVD so we can relive these memories at home.

I’m not sure how the committee can make it more extravagant for next year. Maybe the kids will start arriving on their last day in limos.

Just bear with me a little longer. The fun is almost over. The fanfare culminates on the last day of school when the 4th graders march out of the school building to all the parents cheering for them. I actually do like this little celebration. It’s the only one I like. I like it because it’s the only one that is proportional and appropriate to the situation.

Of course by this point the kids have been worked into such a frenzy that they are all in tears. The excessive fanfare has them convinced that life after 4th grade is over. If the committee’s objective was to leave the 10-year-olds as grief-stricken, emotional wrecks, they have succeeded.

I’d also like to take this opportunity to note that over the course of the non-stop celebrations no two events ever take place on the same day. I might be off the mark here, but to me it makes sense to have the graduation ceremony on the last day of school followed by the cheer since all the parents are already in attendance. Plus, it’s the actual last day when no work is going to be done anyway. Then, as the parents are already home and the last day is a half day, the graduation could be followed up with the pool party. Instead, the school events require one or possibly both parents to take a day off of work, and in this case two for the fanfare accompanying their 10-year-old’s graduation. Well, if they want to be good parents anyway.

With all this extraordinary excess I am left wondering, how much can we celebrate these kids?

The answer seems to be endlessly, which may go toward explaining why students in the U.S. rank 24th in Math and 17th in Science but rate number 1 in confidence.

I’m also left asking why the school can’t just be the school and the parents the parents – preferably of their own children? I don’t object to how anyone wants to celebrate with their kids. I just don’t want to be subject to it. That’s all.

Now I must offer you my sincerest apologies for the length of this post, but I felt it was the only way to give you a true sense of what I went through. Now you know how it feels.