Published by My Dishwashers Possessed-Kathy Radigan on September 14, 2016 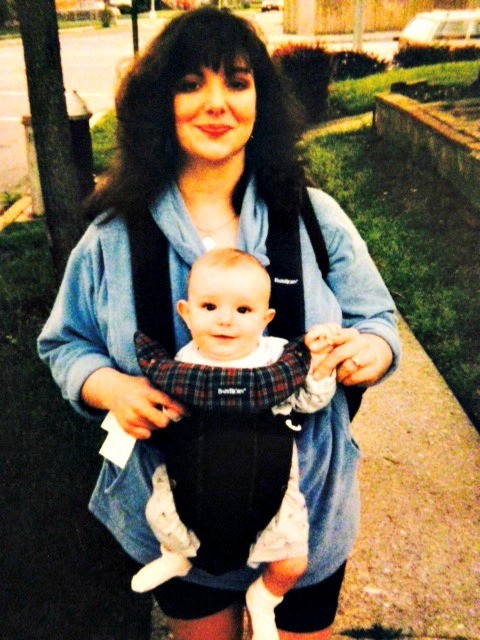 I belong to arguably the oldest union in the world, “The United Federation of Moms.”

I was a probationary member the day the stick turned pink but was issued my permanent card 17 years ago when I had my first child, Tom. I held my beautiful baby boy in my arms and became a proud member.

Whenever I’m facing a pesky parenting problem with one of my three children, I fall back on the safety of my fellow members.

Why can’t I have ice cream for breakfast? Why can’t I jump off my bunk bed into 20 pillows? Why can’t I go without my hat and scarf during a blizzard?

I have found the quickest answer to be, “It’s against union rules.” Believe it or not, this works most of the time.

My relationships with other mothers have been, and continue to be, vital to my sanity as well as my parenting skills.

Who but another mother knows what it’s like to look into your child’s eyes and know without a doubt that you would do anything in the world to keep them safe? Or be driven so crazy by the same child that you find yourself singing, “Brush your teeth and go to bed” to the tune of “Jingle Bells,” just because you’re getting tired of your own voice, and you need a little variety.

When I had Tom, we had recently moved to Queens from Manhattan. I found myself a little isolated as I was caught between a world I knew and one that I hadn’t completely accepted yet.

After four miscarriages, I finally had the most perfect, beautiful little boy known to mankind. I retired from my office job and was now a stay-at-home mom. I had everything I ever wanted.

I was thrilled. I was also profoundly lonely.

I missed the city and the daily interaction with my co-workers. My friends who had kids before me still lived in Manhattan or had moved out to the suburbs. If they had babies, they were second or third children and their lives were now dictated by the jam-packed schedules of their older kids. The long hours my husband worked seemed endless now that he was one of the few adults I had to talk to.

I needed friends and I needed them fast.

In those first few months, I used to joke that I felt like a single woman cruising the bars when I would go out searching for mom friends. I would walk through my neighborhood in Queens looking for women pushing strollers.

I joined a gym, took a baby-and-me swim class, and spent huge amounts of time hanging out at the playground and library, but I had little or no luck. I might strike up a conversation with a mom or two, but they usually had older kids and an established group of friends. They were friendly and polite, but I didn’t belong.

My first year home, I went to my local Dunkin’ Donuts so often that the people behind the counter bought Tom a Christmas gift. He still has the stuffed bear.

I still remember the day I met Debbie. She was walking to Dunkin’ Donuts, and I was on my way home. Our eyes locked, and it was kismet. We looked in each others carriages, joked about our lack of sleep, and exchanged numbers. That was the start of many coffee, I mean play-dates, quieting and entertaining babies.

Soon after I met Debbie, we met a few other moms and formed a mother’s group. Our union local was born.

We cheered each milestone our children reached and worried when there was a problem. We saw each other through sleepless nights, trips to emergency rooms, speech delays, and the Terrible Twos.

The other day I was looking over some pictures from Tom’s first birthday party, and there we all were. A group of extremely tired, but very happy moms. We were sitting in my basement that was decorated with Blue’s Clues balloons, holding our babies, and feeding them their first tastes of pizza and cake.

Eventually we moved from Queens to the suburban neighborhood I grew up in. It was so difficult for both me and a 2-year-old Tom to leave the safety of the friends who had become so important to us.

We all did our best to keep in touch and get together, but time moved on, and so did our friends. Second and third babies were born, the children got older, and soon schedules were filled with preschool and other activities. Time together got less and less frequent. New friendships were made, and new alliances were formed.

Tom is now a senior in high school and is thinking about what college he would like to attend. The oldest child in our mother’s group is in her second year in college.The babies that played in basements and playgrounds are now all teenagers who have little or no memory of each other.

But I will never forget them or their moms. I am forever grateful to those women and the memories I have from that very sweet time in my life.

I needed those friends to get me through the baby and toddler years, just like I need the friends I have today that see me through the fears and triumphs of the tween and teen years.

I am and will continue to be a very proud member of the United Federation of Moms.

Dear New Mom, Yes You Will Be Judged, Please Do Your Best to Ignore it.
Remember It's Never Easy Saying Goodbye
To My Moms Group on Mother's Day: I'm a Great Mom Because I Found My Tribe
advertisement

Dear New Mom, Yes You Will Be Judged, Please Do Your Best to Ignore it.
Remember It's Never Easy Saying Goodbye
To My Moms Group on Mother's Day: I'm a Great Mom Because I Found My Tribe