The Day My Husband Became a Chef - By Teaching Preschoolers 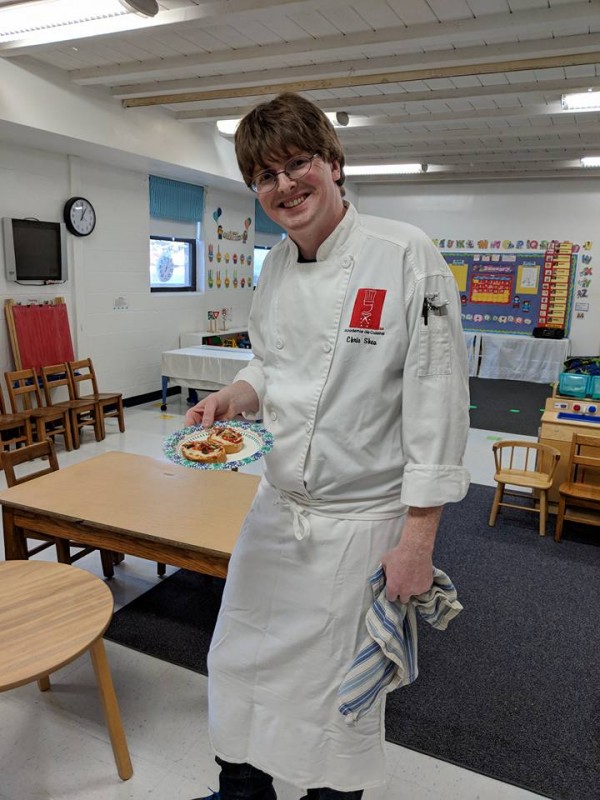 Two weeks ago, I was finally able to call my husband a chef. Looking at him in his white culinary school jacket with his name on it, I realized this situation wasn’t quite what I imagined when I watched him walk across that stage. Because instead of him being the head of a high-end fancy restaurant, he was teaching a bunch of preschoolers how to cook.

Unlike me, my husband Chris has never quite known what he wanted to be when he grew up. While I was double-majoring in college and applying to graduate schools, he bounced from biology to chemistry to political science. The four-year college plan didn’t work out. Neither did poli-sci.

When he decided he loved cooking, I was relieved. Something he could actually get a job in! When he decided to go to culinary school, I was his number one supporter. (It helped that I got to eat the results.) After graduation, he worked in a fancy restaurant for four years.

During that time, people would say to me, “It must be so great being married to a chef!” I would wince and say, “Not really.” They didn’t realize the simple and obvious fact that cooks are at work while everyone else is eating dinner. He worked from 2-11 pm, Tuesday through Saturday. We squeezed in time together in the minutes before my bedtime on weekdays and in the wee hours of the morning on weekends. The 24-hour-diner became our mainstay date location.

While I could (barely) tolerate this schedule, it was clearly unsustainable once we had kids. They would see him for a few hours a week at best.

So on the day I went back to my job, he quit his. In just one day, he went from carefully placing foie gras on plates to preparing menus of mac-and-cheese, ham sandwiches, and quesadillas.

Despite the challenges of being a stay-at-home parent, there’s never been any question that it was the right move.

Watching our sons look up to him is one of my favorite parts of being married to him. Like every parent, he loses his temper, twitches in frustration, and sighs deep sighs when there’s nothing else to do. But watching him tickle them on the couch, pretend a blanket is a tent, or giggle wildly – knowing he’s already had a full day with them – fills my heart like nothing else. While both our dads were involved in our families, he has a different relationship with our children than they did. Or for that matter, than I do.

The example he’s setting for them will last a lifetime. We’ve seen it already in how our children perceive gender roles. While several little girls in my son’s preschool class said they wanted to be mommies when they grew up, mine was the only boy who said he wanted to be a daddy.

Now, Chris carries that influence into the classroom. When our son’s preschool teacher found out that he cooked professionally, she invited him to teach an eight-week after-school class. Although he’s never been a teacher, he’s been helping regularly in my son’s preschool classroom for the past year and a half.

At first, he hesitated. As always, I told him to go for it. So he did.

As Chef Chris, he’ll be leading a group of 10 three and four-year-olds, plus one adult helper. From French-bread pizza to macaroni and cheese, he’s teaching them about ingredients, cooking methods, and not sneezing into what you’re cooking.

Perhaps more importantly, those kids will be learning more than just cooking skills. They’ll be learning that boys can cook and work with kids. Just like our kids, they’ll see that “Dad” is a pretty amazing job title. Honestly, I think shaping the minds of our youngest cooks is way more important than any fancy meal he could ever put together.

Congratulations to my husband for finally becoming a chef. Although neither of us anticipated how he would get that title, that’s so often how marriage and parenthood works – unexpected twists and turns take you right to where you always needed to be.