The Day EVERYTHING Changed 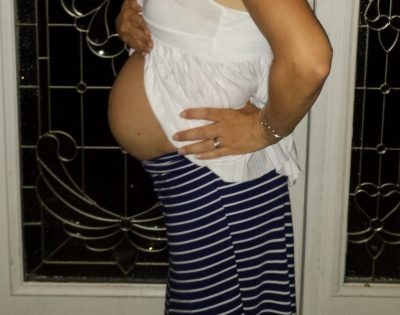 I knew what it was when it happened. I knew in my heart it was my water breaking. I’d felt that bizarre, spontaneous “pop” twice before. But, it was too early for my water to break. I was only 19 weeks and 4 days along.

My babies prefer to arrive 2-3 weeks before that magic 40-week target, but this was just. too. early. I kept saying, “This can’t be my water breaking. That can’t be what it is.” I never thought I’d pray for my bladder to be failing me…

The doctor broke my water in the hospital with my first two pregnancies, after hours of hard labor resulted in very little dilation. That was a whole different experience. That was a huge release of fluid at once, similar to the way movies portray it. This was definitely not like that. Still, this was different than when my water broke at home with my third and fourth babies too. This was very small amounts, every once in awhile a bit more, nothing continuous. But, I still knew.

I texted a friend who is a nurse in Labor and Delivery (the same friend who’d been a surrogate and answered a million questions for me while I was in the process), and she told me to call the on-call doctor and describe what was happening.

Sporadic fluid leaks. No contractions. No bleeding. No pain. Just fluid ... and fear.

The doctor asked me to come to Labor and Delivery as soon as possible. It was early Sunday morning of Labor Day weekend. NONE of my regular babysitters were in town. We were finally able to reach my college-age cousins to come over and stay at the house with the boys so we could go to the hospital.

I don’t remember if I even spoke on the way there. I was praying … and breathing … and being as still as possible to try to avoid any more fluid loss. I imagined the doctor telling me it was a false alarm and we could go home.

“No worries, Mrs. Kamp, you just peed on yourself. Go home and do some kegel exercises.”

Unfortunately, that’s not the conversation we had.

After waiting (and waiting) in a miserably cold triage area (literally and figuratively), a rather nonchalant nurse came in to ask me a few questions. I wasn’t having any contractions, so she didn’t think my water had broken. She reluctantly gave me a quick test to confirm if it was indeed amniotic fluid. When it was confirmed, she told us she was so sorry and she’d be back with a doctor to explain “what was happening.”

What did that mean? I knew what was happening. My water broke and now I was going to have to go through some kind of procedure to fix it.

But, that’s not how it works. There is no procedure to stop the fluid.

The doctor checked me to see if there were any other signs of progressing labor -- dilation, effacement, etc. -- but nothing else was happening. Still, she talked very softly and slowly, using words like “nonviable,” “inevitable,” and “preterm” repeatedly. I remember listening but not believing there was nothing they could do to stop me from going into labor and delivering a “nonviable” baby. They were going to admit me to the hospital for observation, but she said, in not so many words, that there was a great chance the baby would be born in the next 24-48 hours.

I just didn’t feel like I was going to lose this little guy, no matter how many times she and the nurses repeated the statistics.

It was very surreal. I don’t remember everything that was said. I do remember having a terrible headache from holding back my tears while she was talking to us, and when she said she’d let us have some time alone to call the baby’s parents and decide what we should do, I just lost it. I couldn’t hold them back anymore.

“Decide what to do?”

I was carrying a precious baby boy for two amazing people who already loved him more than the world … and he was moving and kicking in my tummy like nothing was wrong. So, as far as we were concerned, we weren’t going to do anything to hurry along something that wasn’t happening yet, even if it was “inevitable.”

When Jeff called the bio parents my heart ached as he told them what was going on, and what the doctors had said. They were packing their bags and heading to Gainesville. I could only imagine what that 5-hour drive was like for them that day.

As I tried to “relax” in the room I was given, I kept questioning everything I’d done in the few days prior. What had I done to cause this?

We’d taken the boys to the UF soccer game Friday night … a fun family night, nothing strenuous or stressful. Saturday was a great day of tailgating at the house and going to the UF football game. Yea, I cheered for my Gators but nothing above what I’d done with my four previous pregnancies. 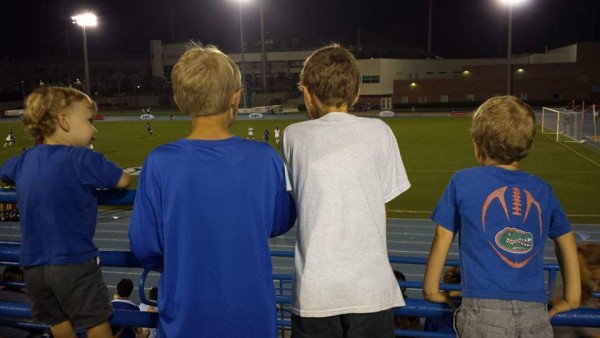 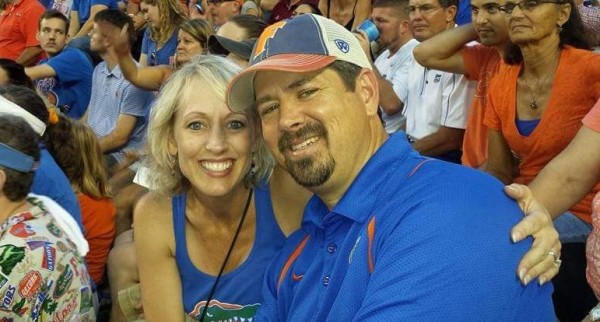 I’ve never acted like pregnancy was a handicap or hardship; I’ve always just gone about life as usual. Now, I was questioning if I was the worst person ever for not taking extra, extra precaution with this particular pregnancy. Should I have taken it easier? I already sat all day at my job, surely the weekend activities hadn’t made this happen. My mind was all over the place.

We were reassured over and over by the doctors and nurses (and through our never-ending Google searches) that PPROM (preterm premature rupture of membranes) can happen randomly, and to any woman at any age. It can happen during a first pregnancy or during a fifth. It’s often caused by an infection, which I didn’t have, so we don’t know what made that tear in the sac.

We just knew for the rest of the pregnancy, I would be lying in a bed, as flat as possible, for as long as possible. First at home, and then, if we made it far enough, in the hospital.

This changed everything. Everything.

Our schedules, our plans, our routines, our lives.

But, we knew the end result would be the most beautiful miracle. And that’s what I signed up for … to help bring a miracle home. 🙂

Facing a Possible Birth Defect: My Story
Labor is NOT like a sitcom — but sometimes it may feel like one
The quick onset of Placental Abruption
advertisement

Facing a Possible Birth Defect: My Story
Labor is NOT like a sitcom — but sometimes it may feel like one
The quick onset of Placental Abruption