Why the 'cheese challenge' is not a 'gouda' idea

New parents, I'm warning you. What goes around comes around.

Please remember that phrase when your toddlers, lacking in verbal skills but able to communicate with those big trusting eyes, are sitting in high chairs awaiting nourishment and you decide to ... to ... oh, I can barely type the next sentence without weeping for tomorrow's generation.

You decide to throw a slice of cheese directly at their sweet faces. While recording the carnage on your phones.

If you have partaken in this twisted form of entertainment, you are part of the latest viral craze sweeping the internet. Fire up your Twitter or Instagram feeds, search "#cheesechallenge" and watch toddlers worldwide getting pelted with slices of cheddar, Muenster, havarti, pepper jack and the like. This is usually followed by an off-screen cackle of maniacal laughter from the parents, accompanied by a "what did I do to deserve that?" facial expression from the little ones. 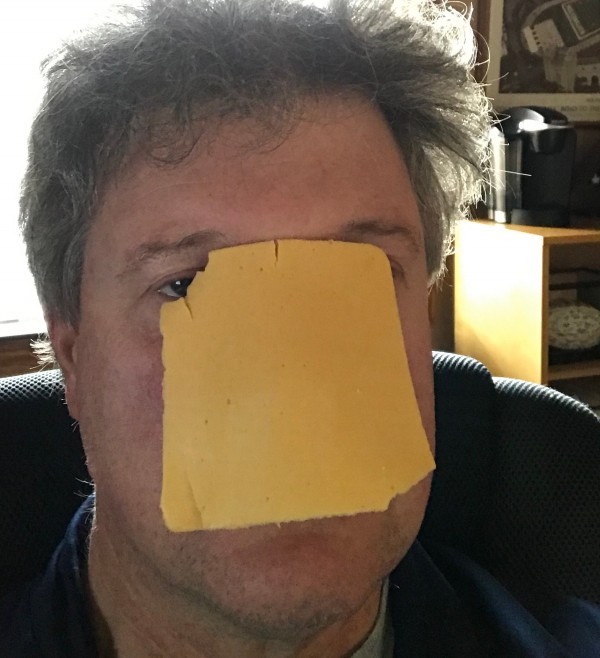 Of course, that's only if the cheese misses their eyes and lands on, say, their foreheads or cheeks. Thankfully, I haven't seen any parent dumb enough to throw a cheese log or wheel at their offspring's noggin; but I'm sure such footage exists and is probably being scrutinized by child welfare authorities.

New moms and dads, I've been there. I realize babies can be a handful. The days are tedious and you long for an outlet, any outlet, to alleviate the boredom. But please, place the Kraft American Singles on your baby's tray and not in your pitching arm. Take it from me, kids never forget.

When my oldest daughter mastered crawling, she simultaneously discovered the ability to reach up and open kitchen cabinets and drawers. However, lacking spatial awareness, she neglected, at first, to move her face out of the way as the cabinet door swung toward her. The result was a "bonk," followed by brief silence, followed by a cry of pain. I swooped her into my arms and dried her tears, while laughing hysterically inside. I'll admit, sometimes I encouraged these kitchen experiments, purely for my own sadistic pleasures.

Now fast-forward 15 years. That same daughter, in a rage over some topic only a teenager would consider of utmost importance, retreats to her room and slams her door. From the hallway, I hear various drawers opening and being slammed shut while she screams, "I have NOTHING to wear."

At least I don't hear a "bonk," proving that she's been paying attention in physics class.

Was this bedroom tantrum the result of me encouraging her to expand her boundaries? Or was it payback for my willingness to let her spend much of her first year with a bruise on her forehead?

Prior to having children of our own, my wife and I babysat our three nieces for a weekend, a great test to determine whether we were cut out for this whole parenting thing. While my wife expertly handled diaper changes, baths and bedtime stories, proving that, yes, she was ready, I tackled smaller challenges.

One of these tasks was helping a 7-year-old put on a winter coat. I successfully got her arms into the sleeves and, feeling smug, zipped the coat up to her chin with a flourish. Her look of pain made me quickly realize I had also zipped a portion of her neck cartilage. After a few minutes of tears, she claimed to be fine, but upon graduation from college she promptly took a job in Houston, where winter coats are nonexistent. I blame myself.

So, parents, before you aim for a forehead with something that would look better atop veal Parmesan, think ahead to when that child is grown, and you are old and in need of care. Perhaps there will come a day when you are unable to feed yourself without assistance. As you sit in your Medicare-purchased chair, your trusty walker or cane nearby, and await one of the few remaining foods you can easily digest, please stay alert for flying slices of mozzarella, courtesy of your kids.

And don't say I didn't warn you.

How to Early Education for Your Toddlers
Goodbye Yellow Brick Road
Surviving A Road Trip with Toddlers - Our Best Tips!
advertisement

How to Early Education for Your Toddlers
Goodbye Yellow Brick Road
Surviving A Road Trip with Toddlers - Our Best Tips!