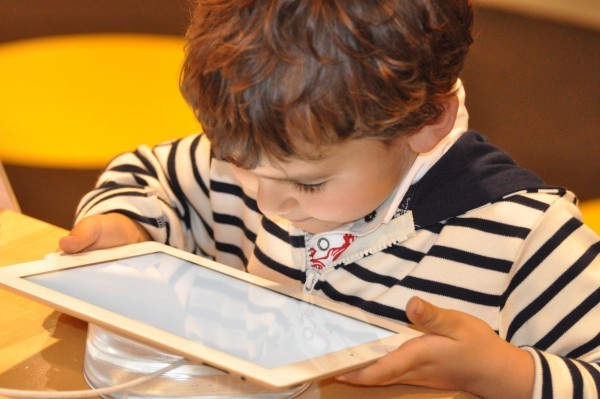 Shield up. I’m expecting some tomatoes thrown my way with this one. It is about time we address the 5” to 75”+ elephant in the room (or in your child’s hand): screens. Posted front and center on the door to my pediatrician’s office is the recently updated American Academy of Pediatrics’ (AAP) recommendations for media use. If you care about what the AAP has to say—and as parents I hope we are in agreement that its stance is a pretty good place to start for the most current information on children’s health—then screen time and exposure to media is one of the most relevant topics in parenting today. Not to mention, it has focused a lot of its time and research to fund exploration on the impact of screen time on various components of child development.

A little back information: technophobe, luddite, whatever you want to call me, admittedly I am a little frightened by technology and have spent a lot of my life separating myself from it. For the large majority of my adult life I did not own a television, and I still refuse to own a smartphone, even though that conscious decision often results in not only odd looks from those around me, but also puts me at a huge disadvantage with modern communication. In business meetings, at church, and even at family gatherings, I am often left totally in the dark about what is going on around me because I do not have in my possession a handheld supercomputer. My neighbors find it so amusing that flipping open my phone to answer a call has been the catalyst of many a thought-provoking conversation at the neighborhood pool. The deliberation about whether to purchase a tablet for my children for Christmas elicited one of the longest reoccurring conversations in my marriage (BTW, daddy lost that one), and I am quite outwardly terse about my discussions within my own family about screen time boundaries.

The National institute of Health has targeted the influence of screens on various components of health and human development as one of the prime beneficiaries of its research dollars. The results of this on-going scientific research is (one of) the primary factors in why I choose to remain in the 20th century. In case you’re interested, here are some of the more interesting findings.

-Nomophobia, the fear of being separated from one’s smart device, is one of the fastest growing anxiety disorders today and has a number of associated health concerns.

-The hunching posture (“iPosture”) that is the oft result of using a smart device can add up to 50 pounds of pressure on your spine and has been identified as one of the causes of increases in chronic back problems.

-Recent studies have identified screen time as possibly the single greatest factor in sleep deficiency and have collected some intriguing data to suggest that the amount of time spent connected is directly associated with levels of weight status and fitness.

-If you haven’t heard of occipital neuralgia, a condition in which the nerves that run from the top of the spinal cord up through the scalp become perpetually compressed or inflamed, or the aptly named “text claw” (which as of yet is not an official medical diagnosis), get informed. These are two real health conditions that are becoming far too common causes for medical intervention due to increased usage of smartphones.

But we aren’t here to discuss our health. This is about our little bundles of joy; and boy, a screen is often a lifesaver for those of us caught in the (almost unavoidable) rat race of modern parenting. My crazy life isn’t abnormal. It contains two demanding careers, one parent who is also a full-time student, and a five-year-old and a two-year-old. Sometimes it is very appealing to hit the “on” button and call it a day on our parenting responsibilities. And, based upon the zombie-like state that a screen anywhere within seeing distance induces and the reaction that hitting the “off” button produces, my children would like nothing more than this. So, let’s excavate the mountain of research that the AAP has used to develop their current recommendations, which suggest no screen time for children under 18 months and strict parental supervised limits throughout all of childhood. First, screen time has been linked to delayed language development to an almost unbelievable degree. According to a recent study, each additional 30 minutes of handheld screen time was linked to a 49 percent increased risk in expressive speech delay. Much of this effect is due to the very same characteristics that make smartphones and tablets so amazing: they provide numerous streams of stimuli and the ability to process multiple actions simultaneously. Unlike your child reading a book, or having a book read to them, the sensory (specifically, audio and visual) inputs are processed for them, not putting any stress on those developing cognitive muscles and neural pathways. Furthermore, it engrains the principles of immediate gratification, as each swipe of the finger provides an immediate response and an impending activity of multiple neurotransmitters.

While I can definitely agree that screens are simply a part of life and it is important that children (and everybody) gets exposure and learns to utilize them, research also suggests that parents are receiving some inaccurate information about how beneficial “educational screen time” can be for the developing mind. Based upon a recent review and an even more current search on multiple databases conducted by yours truly, there seems to be no evidence-based research to suggest that screen time has any cognitive developments benefits for children aged 0-3. In older children, a creative study examining outcomes in environments that totally excluded the use of screens, found that children exhibited significant improvements in several determinants of psychosocial behavior and skills in as little as five days. There are incalculable ways to use screen media to enhance cognitive and social development when they are used as a teaching tool, but despite the best intentions of parents and the educational system, the research suggests that we are rarely using them in a manner that fosters this type of beneficial experience. But don’t worry, large-scale study is underway to determine more effective ways to use technology for improved outcomes.

Just as in adults, screen time can be directly linked to various metrics of a child’s physical health, including my specific area of expertise: obesity. A 2008 study examining factors in obesity at various stages of childhood produced data to suggest that amount of screen time is directly proportional to risk for obesity in every age group and may be the single greatest contributing factor. That review only confirms what the rest of contemporary research suggests: if you can name a lifestyle factor associated with childhood obesity, I bet I can find you several dozen studies that provide strong empirical evidence that screen time negatively impacts it. Increase in overall caloric consumption? Check. Amount of screen time is associated with processed food intake, particularly increased consumption of fast food. Screen time is negatively associated with total amount of physical activity, even when that screen time is so-called “active video games”. Use of computers, televisions, and handheld devices is linked to irregular sleep patterns and sleep disturbances. Inversely, reducing screen time has been shown to positively influence healthy dietary patterns and amount of physical activity and a host of psychosocial and emotional determinants of health.

We get it, the more time our children spend watching TV, scanning through streams on Steam and YouTube on their tablet, and borrowing our phones to swipe through funny cat pictures, the worse off they are going to be. But sometimes it feels like they are born with a magnet imbedded right behind their eyes that has an incredibly powerful draw to all screens. Even the slightest suggestion that it is time to put down the screen and play outside results in a meltdown. While each situation is different, here’s what my wife and I have found works for us. And like most things, we’ve found that simple answers are the best.

When it comes to psychosocial development, the mantra “do as I say, not as I do” not working is about as close to a fundamental law as there is. You want your children to put down the screen and pick up a book? Then do it yourself. We have little control over what happens at daycare or grandma’s house, but in our home there are strict guidelines as far as usage of screens, and those rules begin with us. Barring atypical circumstances, such as a work deadline, we share 30 minutes of screen time per day, which is usually a single episode of something pseudo-educational as we prepare dinner or get ready for bed (yes, I am well aware that the research suggests blue-light during the bedtime routine is a big no-no). We are just as guilty as anybody else about binge-watching re-runs of “Parks and Recreation” once the kids are asleep, but that’s another issue.

Create firm boundaries and stick to them. There are those days when adult life has zapped us of all parental motivation and we want nothing more than a “blue-light babysitter” for our babies, but do your best to be consistent. Once in a while is human, once a week is asking for a child who doesn’t take the rules seriously. It doesn’t stop my children from the fits when that off button is pushed, but they know when the credits start rolling and the Ninja Turtles theme song comes on that screen time is over, and there is no discussion.

3. Do not use screen time as a reward or punishment

In the same way that I discuss developing healthy perspectives about food and exercise, do not use screens as a reward or punishment. Doing so is simply undermining the principles you are trying to instill by elevating the screen as remuneration for good behavior. This idea, known as classical conditioning in behavioral psychology (remember Pavlov’s dog?), simply doesn’t work. In essence, you are taking a neutral stimulus and pairing it with an inherently rewarding stimulus (unconditioned stimulus). Eventually, the praise and attention will be of little value and they will become conditioned to expect the screen. The biggest reward should always be acknowledgement and praise from you.

Parenting is hard and the conveniences of the digital age aren’t making it any easier on us. As always, raising more healthy and well-adjusted children starts with being better yourself.

Children, Screens, and Why It's Time to Take Back Childhood
Honey, If You’re Gonna Be Awesome, We Don’t Have Time For That Screen
4-year-old takes 12-hour road trip with no iPad: Here’s what happened
advertisement

Children, Screens, and Why It's Time to Take Back Childhood
Honey, If You’re Gonna Be Awesome, We Don’t Have Time For That Screen
4-year-old takes 12-hour road trip with no iPad: Here’s what happened