It’s the little comments. You know the ones. You've probably given

them and definitely received them.

Some sweet and harmless: "Enjoy every minute. It's goes by so fast."

Some that follow a litany of complaints: "But it's so worth it."

The ones that make the giver sound superior: "You'll see." or "Just you wait."

Recently, a friend told me that she was pregnant and was slowly
starting to tell her other friends and colleagues. The first thing I
said after congratulating her was, "The endless fear bombs and
comments that will be hurled your way about 'how you'll never sleep
again,' etc., are BS. You will.” She thanked me profusely, saying that
she'd received many congratulations peppered with one warning or
another. Many of her friends, while expressing their excitement,
couldn't help themselves from including a few words of caution: "sleep
now," "wait until she cuts her first tooth…or gets constipated…or
needs to go to the ER," etc. It all seems so intimidating. I find
myself having flashbacks to pledging a sorority and hearing the horror
stories about the (mostly) embellished hazing that awaited. Except
pledging is temporary in comparison to pregnancy and certainly to
motherhood.

My friend is being robbed of enjoying this exciting time of
announcing her pregnancy – one she was told to never expect. Now that
she's into her second trimester, her desire to let people know of her
and her spouse’s impending parenthood is being dampened due to the
"warnings" packaged with the congratulations she has thus far
received.

Moms, let's stop the fear mongering, whether it be intentional or
unintentional. Pregnancy can be hard. Birth, no matter how your little
one comes into this world, can be hard. Those first few days and weeks
can be especially difficult and trying on one's body, mind and
relationships, not to mention our attempts to suppress the overall
sense that we're "doing it wrong." (spoiler alert: we’re not) The last
thing an expectant or new mom needs is to feed off of that needless
fear for dinner.

The shock of my life thus far came at age 43. A few years after
giving up on having a baby, one doctor saying my ovarian reserve was
"barely detectable" and another telling me I was beginning
peri-menopause, I peed on a stick one night and found I was pregnant.
It took some time to adjust to the news, and even longer to tell
people, especially because my husband and I had long since put the
idea of a baby behind us.

I was one of the last of my friends to get married and then to
have a child. As I have witnessed so many go before me, I've stood on
the sidelines and watched my expecting friends field solicited and
unsolicited advice. Now it was my turn to accept or deflect all that
was heading my way. And did it ever.

People just couldn't help themselves with the comments. Whether
you have a baby at 43 or 21, doesn't it go without saying that sleep
will be scarce for a while? But will it really be gone forever? No.
Further, my baby is different from your baby, so while something
embarrassing or gross or frustrating - or even a sweet, pleasant and
lovable moment happened to you, it might not happen to me in the exact
same way, or even at all!

I'm closing in on a year with our little dude. So if lightening
were to strike twice, I'd at least have some experience with what to
expect. But looking back, I think it would have been helpful to me
then, and to so many expectant moms fearing the unknown now, for those
who have been down the parenthood road to explain why “it's so worth
it!". If you've just explained in no uncertain terms why you're so
frustrated, tired and longing for a break, don't finish that sentence
with "but it's so worth it" without saying WHY. Put that mom-to-be's
mind at ease! Tell her that she will sleep again! Instead of making a
thinly veiled threat with "Just you wait," start the conversation with
"Just you wait until your little baby smiles at you for the first
time."

I've made it a practice now to tell any of my mom-to-be friends
or relatives that they will sleep again, and probably sooner than they
think. That they don't have to enjoy every minute (who enjoys 3am
blowouts?). And that it won't seem like it goes by so fast when you're
waist deep in the daily slog of it all. But the pieces will fall into
place. The baby will sleep. You will eat something other than cereal
for dinner. It will all be so worth it. You'll see. 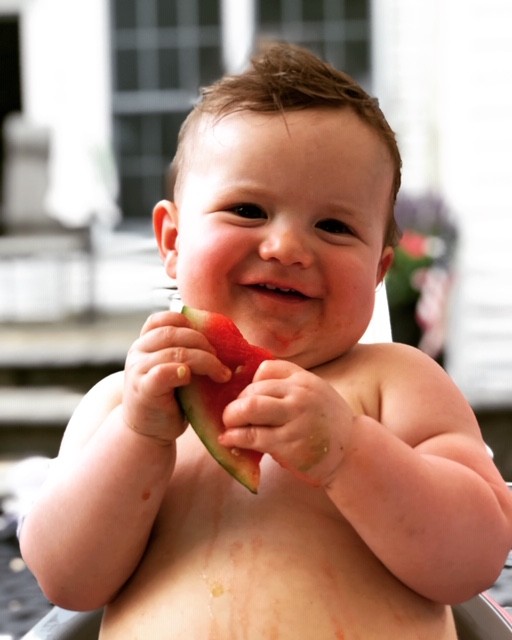 Aimee Lubin is a political affairs professional by day, a wannabe writer by night, a Philly native by birth, and a mom by miraculous chance. She counts Key West, good bath products, and vanilla coffee creamer as things she can't live without. She lives in Annapolis, MD with her husband, son and three extra large retriever lap dogs. Take away her chips and salsa, and see what happens.