The American Men I Want My Son to See 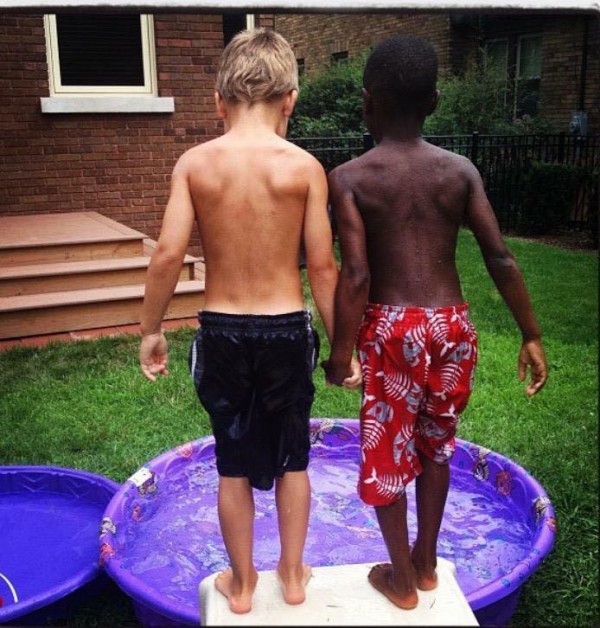 This is one of the many photos my son Jack has taped on his memory board in his room. It was taken two years ago when he was eight.
Every time I tuck him in at night I walk by it, and it makes me smile.
It was a hot summer day, and he and his best friend were so excited that they could go "swimming" in the baby pool our neighbor had filled.
Their exuberant excitement over something so seemingly insignificant made me take notice, so I went over and took a picture. Later that night when he saw it, his comment was "Oh my Gosh, we look so much alike!"
I love the photo for many reasons, but I think it captures something that we all need to be reminded of, what it was like to be a kid. When holding the hand of your best friend made taking a scary jump feel safe. When you found that one friend that you had everything in common.
These two boys love all the same things. Ninja Turtles, ice cream, sprinklers, climbing trees and most of all, each other.
As I watched the news of the protest in Virginia I wondered how those young men got to this point in their lives? How can they hate someone just because they are different?
We don't teach our son to be color blind. Quite the opposite. It is obvious that their skin is different colors and differences should be celebrated.

My heart is sad for these men who belong to hate groups. Think of all they are missing. Whatever that void is, they are filling it with hatred. Maybe their parents taught them this. Maybe they had a horrible childhood, or maybe they didn't. Or maybe they never experienced a friendship like the one my son has.

As a mother of four boys, I'm doing all I can to break the stereotypes that they see everywhere about what it means to be a man.

As hard as that is to do on a daily basis, what I know for sure, is that the men that we saw on the news, fighting, carrying tiki torches and spewing hatred did so because they saw the opportunity. It wasn't about the statue.

Last weekend my boys asked questions about the angry men they saw and I assured them that those men are not the majority, it may appear that way on television and in photos because they were in a group, but trust me when I say, they are not. Sometimes when boys are in a group they make bad decisions, they take risks. They join the crowd because they want to fit in and are fearful. Joining a crowd is easy, standing alone isn't for the weak.

The American men I know aren't like what we witnessed in Virginia. The ones I see are far more concerned with teaching tolerance and peace. Working alongside all different races for a common good.

And someday, my boys will be American men.

When someone posts a hateful comment with a picture of the riot saying "This is America." it is not the whole truth. It is a small portion of people who are blinded by hate.

I feel sorry for those men. They will not win. Because in the wings, there is the next generation rising who will stand up and together that won't tolerate intolerance.

They will stand hand and hand. I'm confident in this.

As I send my sons off to their first day of school, I hope they find a friend who will stand with them on this journey.

Bombs of Kindness
My 7-Year-Old Lost His Dad and This Is What Happened at School
Not just Mean Girls- There are Mean Boys, Too.
advertisement

Bombs of Kindness
My 7-Year-Old Lost His Dad and This Is What Happened at School
Not just Mean Girls- There are Mean Boys, Too.