The 5 Easy Steps That Got My Baby to Sleep 8 Hours in 8 Weeks!

Published by Natalie Thomas on October 6, 2015 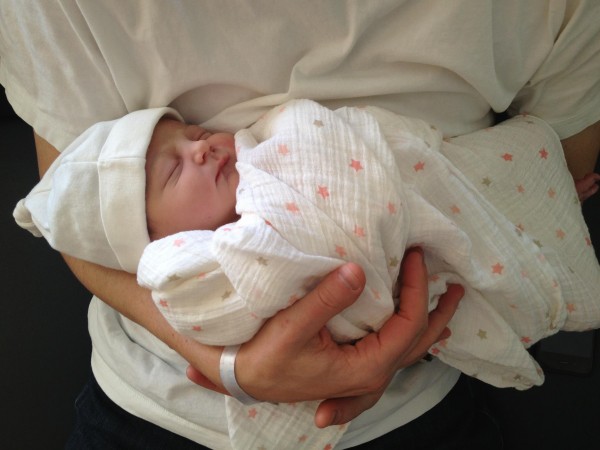 I'm not pretending to know it all when it comes to getting babies to sleep. Or anything regarding parenting, period. I have one child, still barely know what I'm doing and it could've been the luck of the draw (I'm sure I'm doomed with number two, should I have him/her, which is a whole other post! Or, the second I submit this, my daughter will change personalities and become a horrible sleeper just to prove her mother wrong; I'm hoping those habits hold off till her teenage years.) but I like to think it was these few steps we learned along the way from my pediatrician father-in-law, former pediatric nurse mother-in-law, former pre-school teacher mother (I know, we hit the jackpot!), sisters, friends and good old trial and error (a.k.a. the never-ending, completely daunting and dizzying parenting corn maze) that got our girl to sleep 8 hours at 8 weeks and continue, at 2.5, to be a champion sleeper. I'm sure there will be plenty of experts and parents who find fault with these rules but you know who doesn't care? This well-rested mama!

1. Get that kid on a schedule! You know how they say "never wake a sleeping baby"? Well "they" are full of crap. And likely sleep. And you, at this point, are not. You need it. You crave it. You dream about it. And so does your baby. We put our daughter, at the advisement of our highly skilled in-laws, on a three hour schedule form birth. 1/4/7/10. 1am, 4am, 7am, 10am, 1pm, 4pm, 7pm, 10pm. We woke to feed. She was satiated, full and slept soundly. No cluster feedings, no marathon naps, getting her all off schedule... She knew what she was getting and when, allowing her to relax and sleep, which, you guessed it, allowed us to relax and sleep. Relaxation and sleep are keys to a happy household.

2. Get that kid in bed! They need to know that's home base. They're safe there. A newborn is nerve-wracking. "Are they breathing?" "What about SIDS?" "Are they breathing?" It's much more comfortable for you to have them beside you. But the point is to make them comfortable in their room and their bed so they'll be come accustomed to sleeping there from the start. And guess who isn't getting sleep when they're in your room? Everyone. I wanted my daughter next to me for the first three months. That's the arbitrary timeline I made up in my head when I'd finally feel comfortable to cut the co-sleeper cord. My husband wanted her in her room sooner so we compromised on having her nap in there. Well, one night, I had too much wine and too little sleep, passed out during her late nap (8-10pm) and woke in the middle of the night to realize she was still sleeping, which she continued to do until morning. She was eight weeks. From that night on, she stayed in her crib. It turns out she wasn't keeping us up, we were keeping her up!

3. Put that kid in said bed awake! Just like co-sleeping, rocking them and having them sleep on you is so tempting. You're tired and lazy, they're warm and cuddly, they'll only be that tiny for a little bit, they smell amazing... But the sooner they learn to self-soothe, the better. To this day, my daughter loves to get into her bed for naps and nighttime.

4. Give that kid a friend! Speaking of soothing, something like a lovie (it's safer than a big blanket that can get wrapped around them) is perfect for security. When that failed, my husband and I threw in Glo Worm, a gift from my parents, that sang lullabies. Our daughter was mesmerized by its light-up face and immediately calmed down. It. Is. Magic. Do yourself a favor and, for $19.99, buy that little worm weirdo.

5. Hook that kid (and yourself!) up with a sound machine! I stole this one from my sister-in-law. Since she's been born, my daughter listens to the soothing sounds of waves crashing on the shore. In her world, she's on the beaches of Cabo instead of a concrete slab in the city. It's a constant. No matter where she goes or how she's feeling, she's at home with her HoMedics Sound Spa. Plus, her parents don't have to be that "Shh, the baby's sleeping!" kind of couple, maintaining some shred of life pre-parenthood.

Natalie Thomas is a writer and blogger who focuses on motherhood and mental health. In addition to Today, she contributes to HuffPo, Parents magazine, The Bump, The Everymom, Motherly and Mother Mag. She's an Emmy-nominated producer and previously worked for Us Weekly, HarperCollins, The Hallmark Channel, Bertelsmann and Talk Magazine. She lives in the New Jersey with her husband, Zach, almost 9 (going on 19!) year-old daughter, Lilly, and 4-year-old, trouble-making son, Oliver. You can find her at Nataliethomasfriedman.com and @nataliethomasfriedman.

Babywise Helps Your Child to Love Sleeping
Being Drunk & My Final Solution.
The Secret of Sleep (When You Have Kids)
advertisement

Babywise Helps Your Child to Love Sleeping
Being Drunk & My Final Solution.
The Secret of Sleep (When You Have Kids)