When I was 20, I got my first apartment, my first credit card, and my first credit card debt. My Mom lived paycheck to paycheck so that’s the way I lived. I racked up a lot of debt that took me a long, long tome to pay off. I wanted to teach my kids differently, so I made sure that as a homeschooling Mom I made personal finance a part of their lessons. However, you don’t have to homeschool to teach your kids how to be financially saavy. Sometimes, you have to use things OUTSIDE THE BOX to teach then when their not looking! I found this online game, Yesterday's Tomorrow, that I had my kids play. 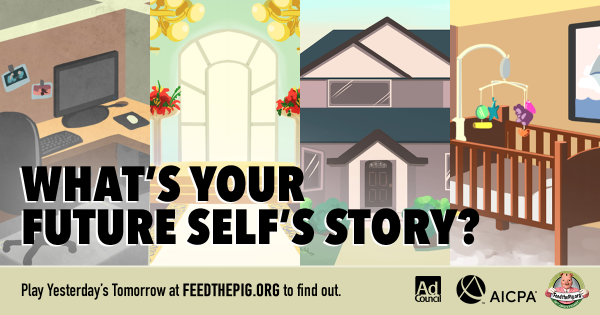 It was odd seeing them make choices, such as " So, it's summer, do you want to get a summer job, and put away money? Of do you want to hang out on the beach with friends? I watched from the background as they made choices, then watched as they saw the consequences of those choices.

Listen, I can talk about finances all day long but letting them learn from some of the mistakes they make BEFORE they make them in real life as comforting to both of us. It helped there was a lot of information on the site, Feed The Pig,, but the real star was the game.

I am a mean Mom I don't buy "fun" stuff for my kids, I make them earn the money themselves. They get allowance ($10 a week) which they have to do all their "fun" stuff with. Movies, video games, coffee dates, that's all on them. I get it's hard making sound financial choices when you have a very limited budget, but my son, who is 15 and unable to get a job, has figured out how to make money on his on when he wants to do more things. He used to go through his money pretty quickly but lately h's realized that he is going to be able to get a car soon. He played the game a few times then find a few ideas for saving for a car- but better yet, I watched him NOT spend all his money in one place and actually put some in his savings. DId playing an online game do that? Maybe. All I can say is he didn't save before he played the game.

Three Ways You Can Teach Your Kids About Money
Yesterday's Tomorrow: Saving for the Future
Money Saving Tips for Single Parents
advertisement

Three Ways You Can Teach Your Kids About Money
Yesterday's Tomorrow: Saving for the Future
Money Saving Tips for Single Parents