Tales From the Bouncehouse: Don't Mess With An Autism Mom

Wednesday morning I had my gallbladder removed. My younger son was with my parents while my older son, who has special needs, got picked up from school by his respite worker. My husband Kevin was with me at the hospital. As I was recovering at home post surgery the following happened at a local bounce house near our home: 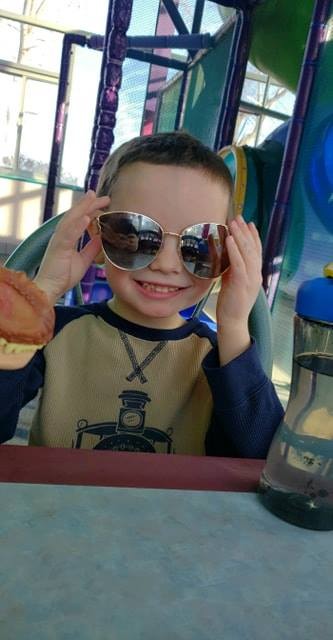 "I care for seriously the sweetest child. A child who would never hurt a fly, one who has eyes that melt your heart and a smile that could blow your mind! One whose hugs literally are so comforting and so full of love! Today, while in the bounce house area he was so excited and so happy. He was minding his own business in his own little world. Literally he was having the time of his life! Saying things like, "Look at me! Keirstin look! I am so happy!" He was so excited he galloped. During the hour we were there, the staff member had mentioned walking feet, walking feet. He slowed down and galloped slower. As I was walking back to sit down, I see (and hear) the staff approaching him. He charged towards him and started pointing his fingers telling him to go sit. Not knowing what was happening, he continued to explore the bounce house! Then the staff yelled at him. When I say I flew from one area to the next...I truly did. When I explained to the staff he didn't understand because he was special needs.. and did not know him/nor know he was being talked to. The words and I quote from the staff made me sick. He said "I don't care whether he is special needs, or has autism. He knows better and if he's not going to listen you can leave." He pointed to rules and said "do you not see that rule? What's the first one? Do I need to read it to you? No running." I said when the owners are here there's children running everywhere, why is that? He laughed and said "gee I don't know. They're more lenient than me." He then began clenching his fist and biting his lip. Stated I was difficult. I stated "you are not going to talk to him like that, nor I." In response back he said "yes I will. I am doing my job. Leave." I told him I wanted to talk to the owner and to call him. He did. I spoke to the owner. He told me not to return back on Wednesdays...and gave me one free hour bracelet. Needless to say I told him I was doing my job in protecting this child from ignorance like him. We had just as much right to be there. Being special needs does not make him any different! In fact he is actually one of the best behaved children I have ever cared for! I am so angry still. I am mad. I am upset. I am sick to my stomach seeing how ignorant and how terrible people truly are." (Shared with permission from our son's respite worker's FB page)

When I heard about what had happened to my son while at the establishment with his amazing respite worker, I was still recovering from surgery. It was not until yesterday that I was able to take any kind of action. The post above spread like wildfire around my community. I spoke with the owners and they agreed that this employee should be let go and he in fact was. They apologized for the treatment of my son and assured me that this was not the standard for their business. Which I in fact knew because we had been there before and had a lovely experience.


In the aftermath, many people thought that this man lost his job too hastily. I was informed that this man even has a special needs child himself. I was messaged by his wife and informed that by him losing his job it would mean that his family would lose most of their income as well.

While I am human and I do feel bad that a family has had to suffer from this, I will not apologize for defending my son. Also in the aftermath, we have also learned that this was not the first incident in which this employee yelled at another child, including one with special needs.

I'm glad this business did the right thing. We will continue to go and I will gladly tell other local residents how graceful they were. And for that man, the one that screamed at my child, I really hope you learn from this. I hope you can bounce back from this situation as a better person. I hope you can understand where my husband, my son's respite worker and I were coming from in our defense of our boy. I also hope you realize how much worse this situation could've been if I could have driven that day.

Starting Special Education Preschool
Why canceling school is so painful for families with disabled children
Choosing to wear a mask for my son.
advertisement

Starting Special Education Preschool
Why canceling school is so painful for families with disabled children
Choosing to wear a mask for my son.