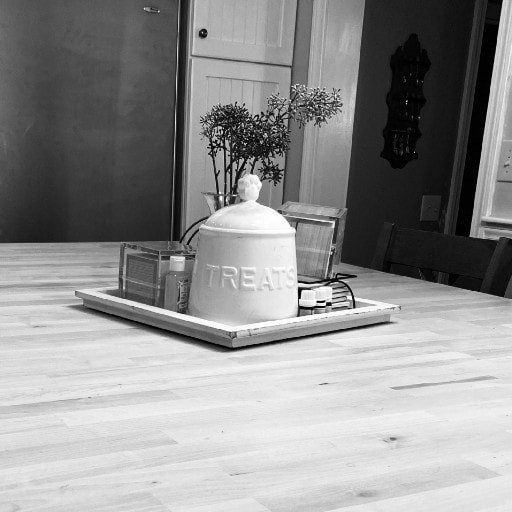 It’s hard to find these days.

I don’t think it’s been here for over 6 months.

Between the kids and 2 parents working from home and 3 noisy dogs and 2 cats (or 4 dogs and 1 cat if you count the cat that thinks she is a dog), this house is very loud.

Silence here is simply not a thing.

Sometimes I can sneak away and soak in the bathtub while the bathroom fan drowns out the noise of dogs barking, video games being shouted at, pianos being played, cats knocking stuff off tables, and dishes being washed.

In those moments, I can almost hear silence.

But tonight I found silence that I didn’t know I was missing.

After my oldest and I ate dinner, he left the kitchen to take a shower. My youngest and my husband were out running an errand. The dogs were sleeping peacefully with their recently full bellies. I have no idea where the cats were but they were quiet.

TVs and radios were off.

The street was empty.

All I could hear was the gentle humming of the ice machine and the soft snores of the dogs.
Rather than getting up to do the dishes or flip over the laundry or sort the mail or prep backpacks for tomorrow, I sat.

I took in the silence.

I breathed in the silence, allowing myself to be fully present for the first time all week.

I felt the chair legs beneath my feet (because I’m short).

I felt the smoothness of the kitchen island built by my family during the height of quarantine.

I felt the air fill my allergy-induced asthma lungs and took my first full deep breath all day.

I felt my mind wander but I brought it back each time to focus on my breathing and the sounds of the silence.

I sat fully present in that moment for as long as it lasted.

Gradually the silence was filled. The ice machine dumped its newly formed tray of ice. The shower turned on in the bathroom down the hall. A car pulled down the street, waking two dogs, causing one of them to bark and the other one to tip tap up and down the hallway, her way of asking to be let outside.

As I stood to do those dishes and flip over that laundry and sort that mail and pack those backpacks, I noticed a lightness inside.

The weight I had been carrying all week was lighter, somehow made less heavy just by being in the silence.

Then I remembered an important fact about me. Silence refuels me. It recharges me. It recenters me.

But silence is hard to find.

Tonight I remember that I have to try harder to find it, even if I have to find it in some stolen moments at a kitchen island.

The house was finally silent but I missed the loudness
Cats, My Number One Dealbreaker
Delayed gratitude
advertisement

The house was finally silent but I missed the loudness
Cats, My Number One Dealbreaker
Delayed gratitude