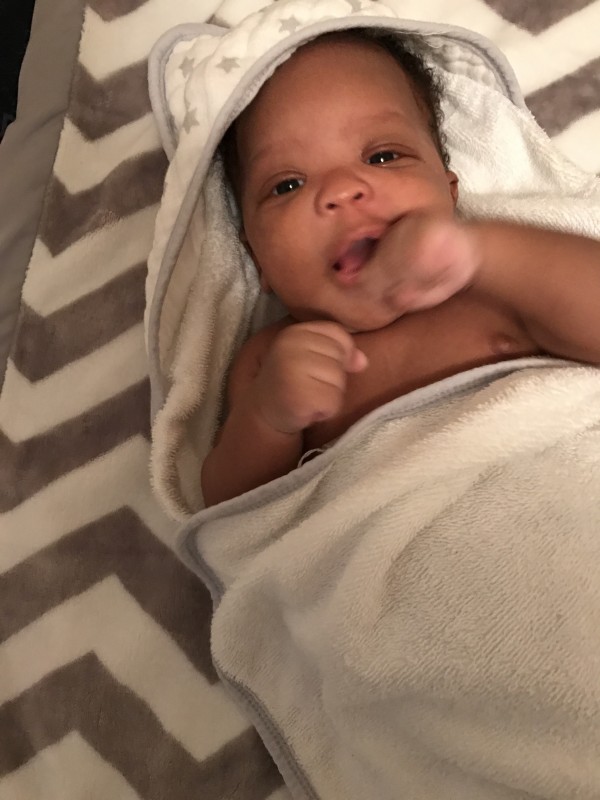 We all know when there's a newborn life evolves around them and only them! When it came to getting my son Chase on a sleep pattern I found myself getting so many opinions on motherhood and looking at other mothers Instagram page and wishing to have my son do that or buy this book to help him sleep and so on that it caused me to lose sight that the only person I should be listening to even if he was just coos is my son.

I remember my younger brother using the Johnson and Johnson lavender sleep time lotion, so I bought that and the bath time lavender product to prepare for Chase sleep routine.

I was getting so tired of the zombie life that I remember learning if you do something 21 days straight that it becomes natural and that's when I said to myself Chase needs a bed time routine!

I kept some people opinions in my temple and disregarded others when it came to mother hood.

So, before I went back to work at 6 weeks I started Chase on a bedtime routine.

It was difficult at first because he was napping until 4:20 at 6 weeks.

I would let him talk and coo and watch me in the kitchen after his nap and of course and a bottle.

My routine started around 6:15pm. I would lay Chase on my bed where he enjoyed kicking and cooing. I would let him see me grab his tub, towel and washcloth and I would make up a funny song about going to take a bath.

Once in the bathroom he would watch me prepare the water and take his clothes off for his warm bath. While in the tub I would sing and laugh to make sure the experience was to his liking. Once out of the tub and dried off I would massage his entire body with the lavender lotion from Johnson and Johnson, put on his pajamas and grab two books and his warm bottle that was in the steamer.

I would then feed him, read two books and we would talk in the living room.

Next I put him in his bassinet and turn on his night time protector and music and when that didn't work I sing Hush Little Baby (with a twist).

It would take a while for him to fall asleep but eventually he did.

I was excited for this routine because it allowed me to do things for myself and prepare things for Chase for the next day.

Now at 3 months my big boy is so use to his routine that he's excited when I walk into the house with him and he sees me grabbing his tub, towel and washcloth.

Chase now sleeps 10-11 hours a night without any night feedings which he stopped when he was 9 weeks and he did that on his own.

I remember people saying let him cry in the middle of the night because he'll get use to waking up at night for a bottle and I felt that wasn't for Chase and I.

Now, he's so tried from the day that he gets agitated sooner for bed and I can only read one book at night but many during the day.

So, slowing down Chase was a success and I didn't need a book or another mothers advice just the bond between a mother and son for the greatest bedtime routine ever!

P.S. he loves the water so much that I'm going to take him out the sling part of his tub and let him sit more in the wate since he loves it so.

Slowing down Chase!
The Staycation: A Perfect Solution for a Special Needs Family
Running hugs, valley girls, confusers and other crazy bedtime rituals