Published by My Dishwashers Possessed-Kathy Radigan on November 7, 2016 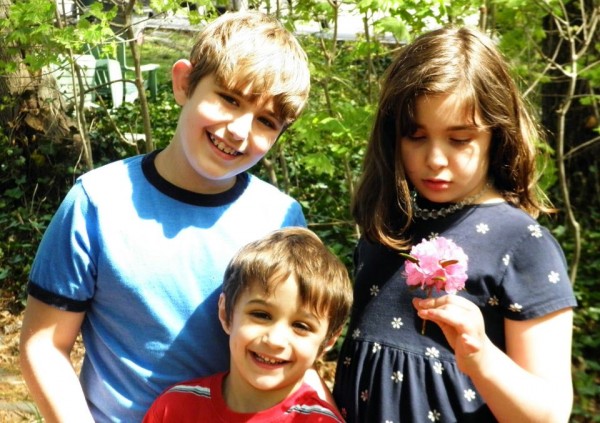 As the parents of a daughter with significant special needs, my husband and I have always tried to shield our two sons from some of the darker realities of Lizzy’s issues. Still, we remain as open as we can, so they can feel close and connected with her and her care.

If that sounds as if it might be impossible to accomplish, it is. This weekend I was reminded of the fool’s errand it’s been.

Yesterday our 17-year-old, Tom, was mowing the lawn. Joe and Lizzy were also in the backyard, and at some point they decided to take a walk around the block. Although Joe told Tom what they were doing, he must not have heard him over the sounds of the mower.

Once Tom finished his job, he looked around and realized that his father and sister were nowhere in sight.

That is when my son bound into the house screaming.

“Lizzy. Lizzy. Where are you? Lizzy.”

“Tom she’s not here. She’s outside with Dad.”

“No. No she is not. They are both gone.” He was now very upset and clearly panicked.

“Honey calm down. Dad probably just took her for a walk around the block.”

“Mom how do you know she didn’t get out on her own and he is out looking for her?”

“Because I have been married to your father for 23 years. Trust me, if there was a problem, he would have gotten me.”

We both started to laugh. As if on cue the front door opened and Lizzy and Joe walked in happy as two clams.

After the crisis, such as it was, passed, I sat down with Tom and asked him why he would panic over his sister’s whereabouts.

There have been a few times where Lizzy did try to make a break for it, thinking it might be fun to cross the street and join the neighbor’s pool party or follow a butterfly off of our property and down the block. But we had always stopped her before she was able to get very far.

It’s also true that because of Lizzy’s very limited speech and penchant for being in her own world, I don’t really want to think about what would happen if she ever did stray from our house. It’s because of these very real fears that we have alarms on our doors and windows. We also have a fenced-in backyard and locks on those gates.

With everything my husband and I have done to ensure our daughter’s safety, as well as never really letting her get that far from our sight, why on earth did her brother think he needed to be so responsible for her?

I really wanted Tom to explain this to me.

“I’m sorry mom. I know you and dad take really good care of her. But I worry so much about her. I don’t know how you stay so calm all the time. Why don’t you ever worry about her? How do you do it?”

I looked at him and was rendered speechless. Is he insane? Calm? Calm? Me?!! Didn’t he realize that I have not had a peaceful night’s sleep in years because I spend most of them worrying about my daughter. On nights I’m not worried about her, I worry about him and his younger brother, just to keep it all even.

What about the 60 extra pounds I have been walking around with for the last eight years? What about the weeks Joe and I have spent panicked over her latest blood test results, or worried over whether the brain damage that has been picked up on five MRIs but still has no name, will finally get a name and with that a prognosis that could be life-threatening?

Then there are the calls I have fielded through the years from teachers and professionals when her behaviors have been out of control or the visits to doctors to adjust her medications to help control those behaviors. How could my very intelligent son have missed all of this?

All of a sudden the answer flashed in my very thick head.

I have gone out of my way to hide my darker feelings and panic from both of our boys. We have given them the facts about their sister’s issues and always let them in on the important information that has come our way about her. But I have always done it through a filter. Me.

I realized that in my attempt to normalize our complicated life with Lizzy, I have been cutting Tom off from pieces of myself. In doing so, I haven’t stopped him from worrying about his sister, I have just given him the impression that I’m not worried about this perplexing and difficult situation. As he sees it, somebody should worry and he steps in. I have to give the kid credit for trying. If only the solution were that simple.

Navigating the Sometimes Tricky Road of Being a Special Needs Family
The Unbreakable Bond My Boys Have With Their Sister With Special Needs
My Family is Like Everyone Else's, Except When it's Not
advertisement

Navigating the Sometimes Tricky Road of Being a Special Needs Family
The Unbreakable Bond My Boys Have With Their Sister With Special Needs
My Family is Like Everyone Else's, Except When it's Not