Shut up and drive: How I learned to survive car rides with my quiet teen

Published by Kavita Varma-White on August 28, 2018

It’s been a recipe for frustration on the daily car ride home ever since he began high school a few years ago. He is my youngest child, my only boy, and with his older sister away at college, my lone baby bird in the nest.

He wasn’t always this way. In elementary school, while reserved and introspective, he’d at least tell me about his day, tell me what funny thing another kid said in class or what game they played at recess. Always great at mastering song lyrics, he’d sing along to songs on the radio at the top of his lungs. I fondly remember one time driving him to youth football practice when he insisted on playing some “pump up music” and schooled me by knowing the entire rap of Flo Rida’s “Good Feeling.”

And then he started barreling through puberty. The deeper his voice got, the less he’d use it. He chose to go to a new high school, where the commute is 20 minutes away to the next city. So many new experiences those first few months, and yet, on our daily ride home, I got nothing. No details. Silence, as he looked at his phone.

I’d ask all the questions. “How was your day?” “Did you learn anything interesting today?” “Who did you sit with at lunch?” But after getting monosyllabic grunts (if anything at all), I knew I had to try a different approach.

I eventually cracked the code, but it took understanding more about what it means to be an introverted teen. Learning about author Susan Cain’s book, “Quiet Power: The Secret Strengths of Introverted Kids,” was eye-opening to me, a rather loquacious extrovert. I read an interview where Cain explained how going to school every day is battery-draining for introverted teens. “They want to come home at the end of the day and recharge their batteries. That might mean being alone or quiet at the end of the day.”

So, while I may find it uncomfortable to sit in a car with someone and not talk, for introverts like my boy, it’s not uncomfortable at all. After a day of interacting with friends and teachers, he just wants some peace.

My solution to a more harmonious car-ride was two-fold. First, I stopped asking questions and turned on the radio. Drake? Blake Shelton? The Chainsmokers? The genre of music didn’t matter. What mattered is that it filled the space (for me) and relieved the burden of talking (for him). Amazingly, sometimes he would even ask if I wanted to listen to a new song he had discovered. 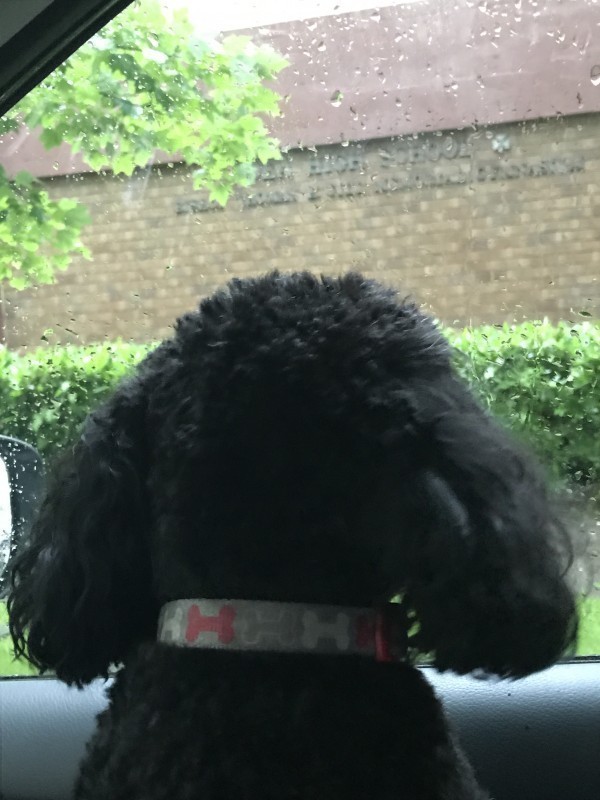 Zeke, our dog, waiting for his "brother" to get out of school.

Second, I discovered the positive effect of bringing along our dog, Zeke, for pickup. (In the dog’s view, there’s nothing more exciting than looking out the car window and seeing your “brother” coming out of school after being gone all day.) And, apparently, dog licks go a long way in melting school stress. Sometimes, after a few blocks, he’d even tell the dog about his day. “Zeke, I had a really hard geometry test today.”

He turned 16 recently and can now drive on his own. We will still have occasional car rides home together this school year, and on those days, I now know the drill: Bring the dog, shut up, and turn up the tunes. But most of all, respect his need to decompress in his own way.

5 things I wish I'd known about how raising a puppy is like having another baby
Got teens? Get a dog!
Teen Anxiety: Teens Need to Know They are “More than This”
advertisement

5 things I wish I'd known about how raising a puppy is like having another baby
Got teens? Get a dog!
Teen Anxiety: Teens Need to Know They are “More than This”