When I first found out I was pregnant with twins, I never imagined that their birth day would leave me empty armed instead of having my arms too full. My twin boys are now 5 months old and doing wonderful, but their entrance into this world is never what I imagined my experience as a first time mom would be.

My pregnancy started off ideal. My first trimester was normal pregnancy woes, my second trimester was wonderful, and my third trimester I was comically large, with my belly measuring 14 weeks ahead of a singleton pregnancy. Although around 20 weeks, my healthy baby boys started to get my team of doctors and myself into a bit of a worry. My baby B, seemed to be slowing his growth. He went from being the same size as his brother in the 80th percentile, and then every couple of weeks at my ultrasound he was dropping off of his growth curve. From the 75th percentile, to the 50th, and once he went to the 33rd the doctors got worried. More doctors appointments and bed rest ensued, and when he dropped to the 12th percentile they scheduled an early c-section at 36 weeks, one month early. Meanwhile, his brother was a chunk and remaining in the 90th percentile. They could never figure out why baby B’s growth has slowed, so so so many tests and detailed long ultrasounds showed that all looked normal.

The day I gave birth I was optimistic. They were estimating that baby A would be around 8lbs, and baby B was around 4lbs 5oz. Everyone was always telling me how ultrasounds could be off, so I was hoping that he would be born at a birth weight that would not land him in the nicu. With an amazing team of doctors and nurses, calming my nerves in the OR by playing Bruno Mars and cracking jokes, I was so excited. They pulled baby A out first, he was chunky with brown curly hair, covered in vernix, wailing a loud cry. We named him James Patrick, born at a large 7lbs 14oz and 18 inches, great for a baby 1 month early! We both looked at eachother and I couldn’t stop crying. Less than a minute later they pulled out baby B. When I saw him I felt stunned, scared, he looked fetal like still. He was bright red, bald, shiny, and so so small. He had a big head and skinny little arms and legs, I couldn’t hear him crying. We named him Vaughn Austin. “Is he okay? Is he crying?” Is the first thing I asked looking at all of the faces in the room “Yeah yeah he’s fine he’s crying” my boyfriend told me. “3lbs 11oz and 15 1/2 inches” they told me. My stomach dropped. All of the doctors and nurses were shocked at their discordance. They all said that they had never seen a twin growth discordance so severe, 4lbs 3oz apart. “Is he okay? What’s his apgar score?” They told me his numbers and that he was great, and I felt relief. “We have to take him to the nicu but you can hold him for a minute before we do” they handed me my boy wrapped up like a burrito and all I could do was stroke his little face and tell him that I loved him, they handed us James and offered to take a family picture for us before they took him away. My boyfriend asked me “do you want me to stay with you or go with Vaughn?” I told him to go with Vaughn that I didn’t want him to be alone. 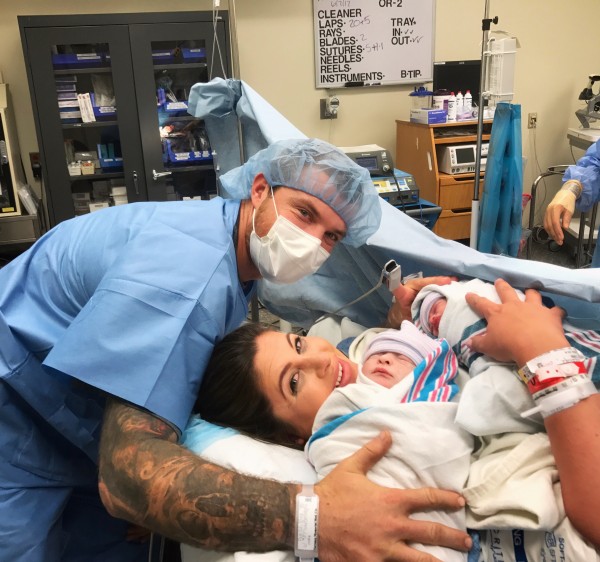 A minute later, Vaughn was gone and they took James from me as well and started rushing around talking about James breathing. Panic set in again. They told me he was breathing irregularly and had to monitor him. After monitoring him for 30 minutes, they told me that they had to take James up to the nicu as well. I got to hold him for a minute before they took him away, I again could only stroke his face and tell him how much I loved him then everyone was gone. I was in recovery for two hours with no babies, no boyfriend, and no cell phone reception to update my family. I was emotionless, I think I was in shock. I had a birth plan. I was also probably feeling so zombied out because i started to hemmorage, but that was all fine after a shot I was given, I didn’t even care about that my head was with my babies. 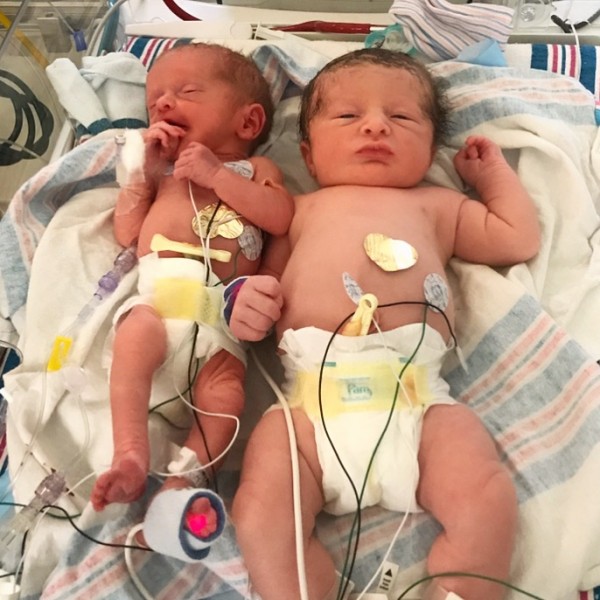 My boyfriend eventually came back, and we were taken into our hospital room. I could not visit the nicu for 8 hours as I could not stand yet to get into a wheel chair to see them. Visitor after visitor came with flowers, and were allowed to go up to the nicu one by one to see the babies. But not me, their mother. Their birth day was not the happiest day of my life.

We eventually got James back late that night, and us being new parents left us feeling like a deer in headlights. I finally got to see Vaughn in the early hours of the morning, having to leave James behind as he was not allowed in the nicu. Vaughn was hooked up to so many IVs, tubes and monitors. They informed me that he was doing great, but his blood sugars were still regulating, his lungs still had some work to do, he couldn’t regulate his own body temperature, and his little digestive system still had some work to do. It all sounded scary to me, but they assured me that these were all “standard preemie problems” and that he would be just fine very quickly. 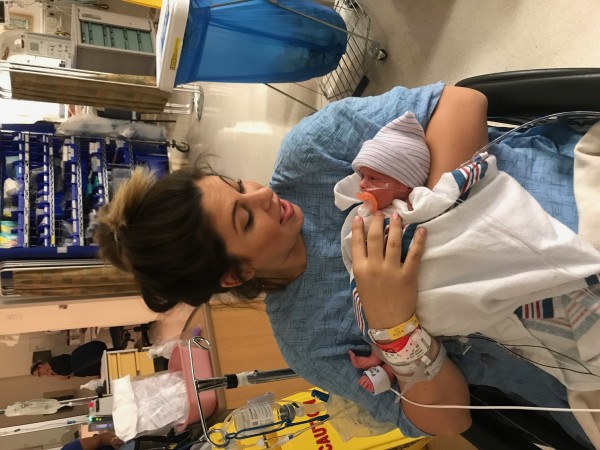 Vaughn was a little fighter and kept ripping out his oxygen tube and IVs, he was always feisty in the womb kicking his brother, so I was proud of him for keeping up his spunk on the outside. Again, all of the nicu nurses and neonatologists said that they had never seen a twin discordance so severe. The twins were somewhat of a medical spectacle among some medical professionals as even our pediatrician today said “oh! This is them! I heard about the discordant twins born in June!”. Staring at my baby in an incubator, hearing all of the babies monitors beeping, and getting to hold his skinny little body made me exert more emotional strength than I ever thought I was capabale of. This was my baby and I had to be strong for him.

It was extremely difficult to bounce back and forth between nursing on demand James, to try to make it up to the nicu to bottle feed Vaughn. Forget about sleeping when the baby sleeps, when one was sleeping I tried to visit the other. Since my boyfriend couldn’t feed James, he would go up and do a lot of Vaughns feedings as well. 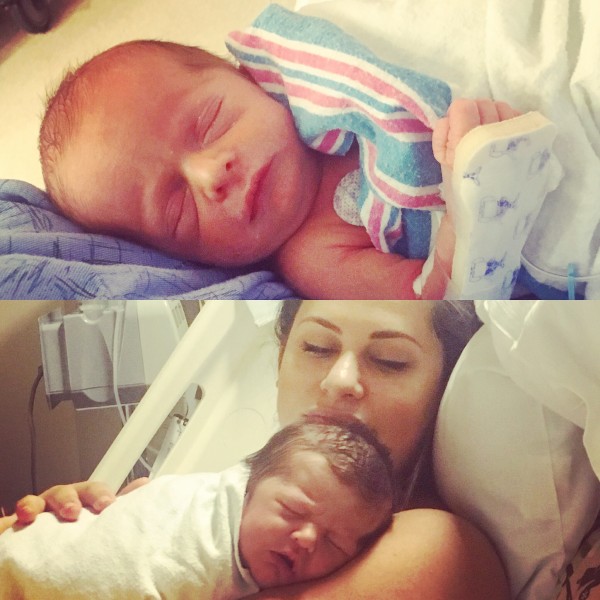 My guilt was through the roof as Vaughn needed his mommy, but so did James, it was very very hard. We were discharged from the hospital 5 days later, and I don’t think I’ve ever cried so hard having to leave Vaughn behind. I was looking at two car seats, two cribs, matching outfits, and no second baby to hold. Once we were home it was even more difficult to see Vaughn, but we did our best to bounce back and forth. Every day Vaughn was impressing us all, eating like crazy, gaining weight and growing so well, he was fighting so hard to go home and was winning.

After 9 days in the nicu, we got to bring our baby boy home. 5 months later they still have a 9lbs weight difference, as James is also a beast who is gaining a mess of weight. We also got the results back from the lab from his placenta to see why Vaughns growth had slowed, and they saw that the only downfall was his placenta was just very very tiny, about a 1/3rd the size of his brothers. No vessels or arteries were compromised, his brother was not “stealing his food”, his placenta just might have implanted in a poor spot to receive proper blood flow and nutrition to flourish. 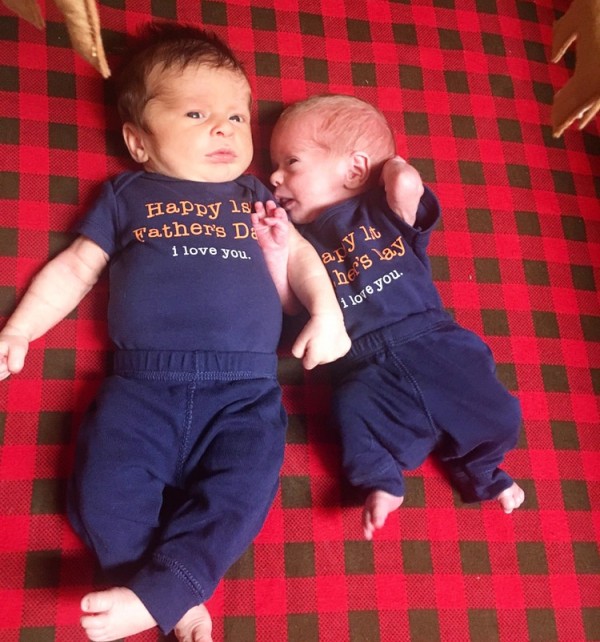 That is my nicu story of my discordant twins, and I am so happy to have both of my boys home. 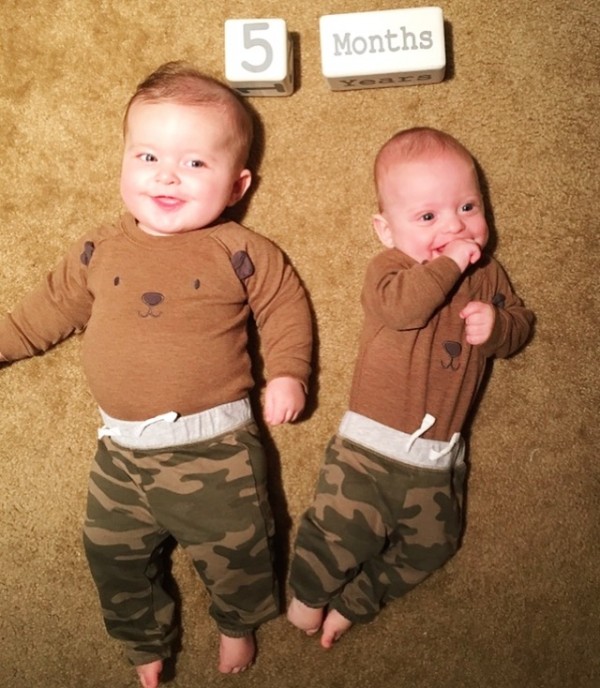 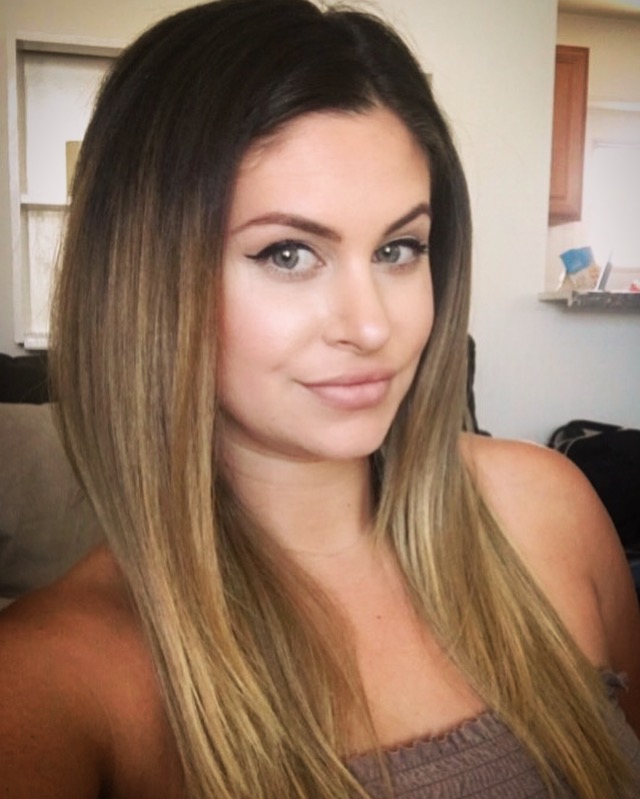 'It was 7 days that changed me forever': My preemie, five years after our time in the NICU
When Only One Twin is in the NICU
Too Little Too Soon
advertisement

'It was 7 days that changed me forever': My preemie, five years after our time in the NICU
When Only One Twin is in the NICU
Too Little Too Soon