Seeing the Grace in our NICU Memories

Published by Brandy Miller on November 14, 2017 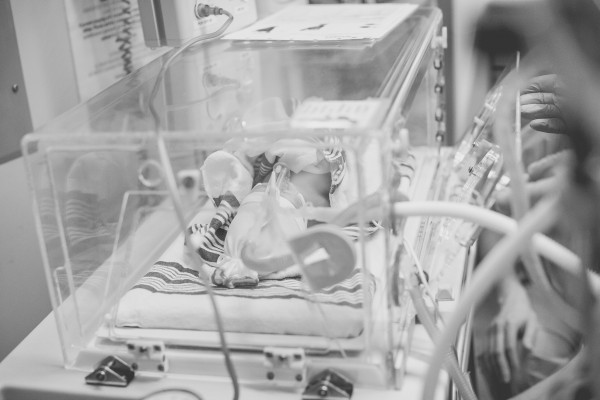 Can I be honest for a moment? For months after my son came home, memories of the NICU still left a bitter taste in my mouth. Yes, even though in the grand scheme 15 days is not that long. Yes, even though he was a 34 weeker that didn't have many complications. Yes, even though in comparison to many other NICU journeys, we had it easy. Yes, even though I often felt guilty about the bitterness. I couldn't really talk about it or look through pictures without feeling my stomach sink or having my heart race. With some friends, I would begin talking about some of our negative experiences with nurses here and there and I could feel myself spiraling out of control. Because here's the reality....The NICU is not what you dream about.

You dream about having that disgustingly gooey but so perfectly fresh baby laid right on your chest after they leave that home you've carried them in. You dream about those first snuggles, first feeds, first cries and sleepy faces... all right there in that first hour. All right there in that hospital bed where your world changed. You dream about visitors coming and passing him or her around while you glow with pride that this child is yours. You dream of spending one or two nights of making sure they're just fine and loading that precious gift up in the carseat to leave. You dream of spending those next weeks in perfect (sleepless) bliss cherishing every noise, movement, and moment.

Or at least that's what I dreamed of.

But that perfect little vision I had quickly changed. (You can read my son's birth story from the beginning here.) I saw sweet him come out, heard him cry, and watched my husband cut the cord. From there the NICU team began checking him out in the room attached to mine. They first thought I would get to hold him but he was struggling with breathing a little so they had to put a CPAP on him. I remember watching from afar as my husband, my sister, and mom all oohed and ahhed while I insisted on them bringing me a picture. One of the neonatologists brought him over so I could get a good look, touch his precious skin, and seemingly in a blink... he was gone. Off to the NICU. 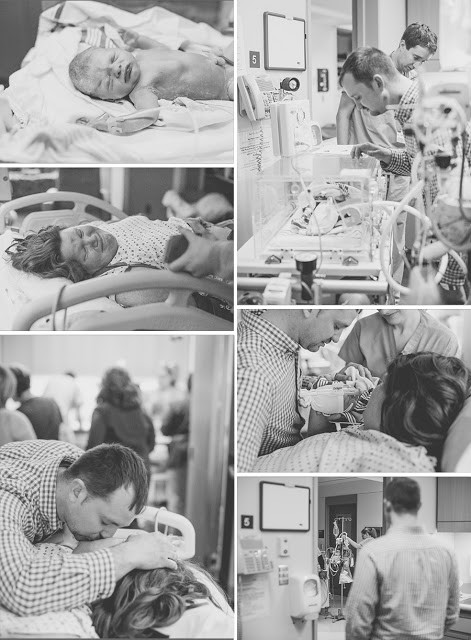 The next 15 hours were harder than any part of pregnancy or labor. See my son was in the NICU but because of my medicine I was stuck in my bed in my room. Shortly after they took him Hubby was able to go be with him, do skin to skin with him, and send me tons of pictures. He was able to take family back to see him as well. I was so thankful that they could be with him but not having a panic attack in those several hours was a struggle. I watched the webcam the NICU gave us, kept Christmas movies playing, tried to sleep, and prayed a ton! I don't think time had ever moved so slow. It was just past midnight when I hit 12 hours past labor and could have my medicine turned off. From there, it was an hour before I could get up or eat, then time to transfer to my postpartum room and scarf down food, all while trying to get out the door and wheeled to the NICU. By the time we got there and got scrubbed in, it was 2:45am by the time I was reunited with my sweet boy and after 3 before he was in my arms and my heart could finally settle. 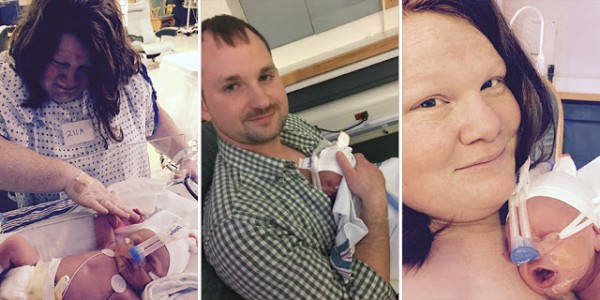 Then our norm for the next 15 days began. There were highs and lows. Good days and bad days. Easy nurses and difficult ones.

Our days followed much of the same patterns...

Watch the webcam on and off all night. Wake up and call to see how he is. Pump and pump and pray for a friendly and familiar nurse. Try not to have a melt down before getting to the NICU. Go through three hour cycles.... being excited to change his diaper, praying while we took his temperature, attempting to nurse or holding while he was fed through NG, being as inconspicuous as possible trying to get more hold time, setting a time to make myself actually put him down, pump, pump, pump, guzzle water in the family room and try to eat a snack, take a quick bathroom break, all to start the 3 hour schedule again.

In the midst of all of that...growing in the ability to advocate. Bonding with nurses and other NICU families. Learning about bili lights and NG tubes and respiratory care plans. Longing for a little quite in a room of sooo many monitors. Appreciating visitors like never before. Picking up serious photography skills on working around a box. Repeatedly denying the need for a break to just go out and meander. Trying to focus on the good and the progress not the setbacks and the tubes. Hating to but having to leave him at night to sleep.

Some moments were easier than others. Sometimes it felt easy to be thankful and positive while other times I felt like a bawling mess who might snap on a nurse. Mornings were harder on me than nights, as I felt like I couldn't get to him fast enough. It was a 15 day rollercoaster ride but at the end of the day every day Hubby would remind me of the progress, of the people we had praying, and talk about how in "x amount of days we'd surely be home." It's so different than anything you expect to experience in those first few days with baby. As if your hormones aren't out of control enough already... it's easy to become a complete mess. I tried to take it moment by moment, nurse by nurse, day by day. And in the wake of coming home, the NICU still seemed frustrating sometimes. 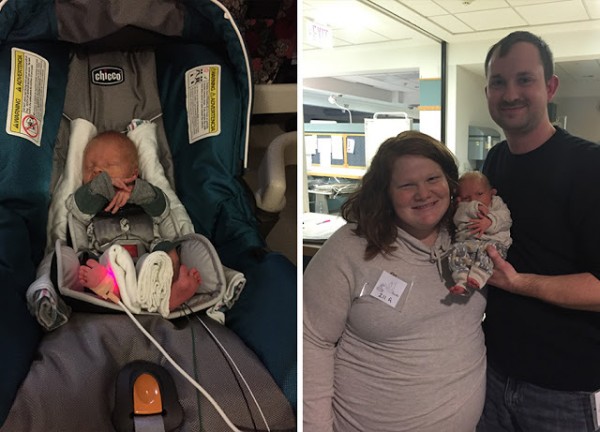 But now many months later, I don't see it quite the same. Of course I still feel a little jealous when I see friends taking their babies home right away. I mentally plan for ways I would advocate differently if we ever ended up in the same situation again. I pray it's a journey we'll never have to walk again. And I still have a hard time comprehending that the baby in those pictures was my crazy little boy. But now I see the grace.

I see the grace that got us through every single moment. The grace that calmed my breaths and settled my heart in the midst of a total meltdown. The grace that didn't let me lose it on the nurse who snuck and put an NG tube in or the one who set us back 3 days or the one who wouldn't let me hold my son.... but instead helped me express calmly my frustrations to the ones who could do something about it. The grace to be thankful we live in an era and a country with NICUs and incubators.

The grace that lets me now look back and appreciate the sacred moments that happened there....The first time I got to hold my baby against my chest and breathe in his precious smell. The countless hours I got to look at him without any pressure to fold laundry or clean house. The excitement of getting to tell him good morning. The joy of letting him eat from me the milk my body had produced. The bonding with friends that will last a lifetime. The celebrating of what might seem to be the tiniest of milestones. The fascination of sweet baby smiles. The closeness with Jesus that comes from needing Him every single minute and Him being right there.

I know that not every NICU journey ends so quickly or with such a wonderful outcome. But I hope that whatever your NICU journey looked like, you can somehow look back and be thankful for the moments there, the precious ones with your little one that are sacred moments. Probably not moments you'd ever want to relive and not moments you planned on having... but sacred moments with your little one that are worth remembering and smiling at. Because they helped your family get to where you are now. They helped shape you and change you. They made you appreciate things many would take for granted.

Remember and smile... because above all else... they were moments with your baby.

All images from immediately after birth were taken by Stephanie Leight Photography. 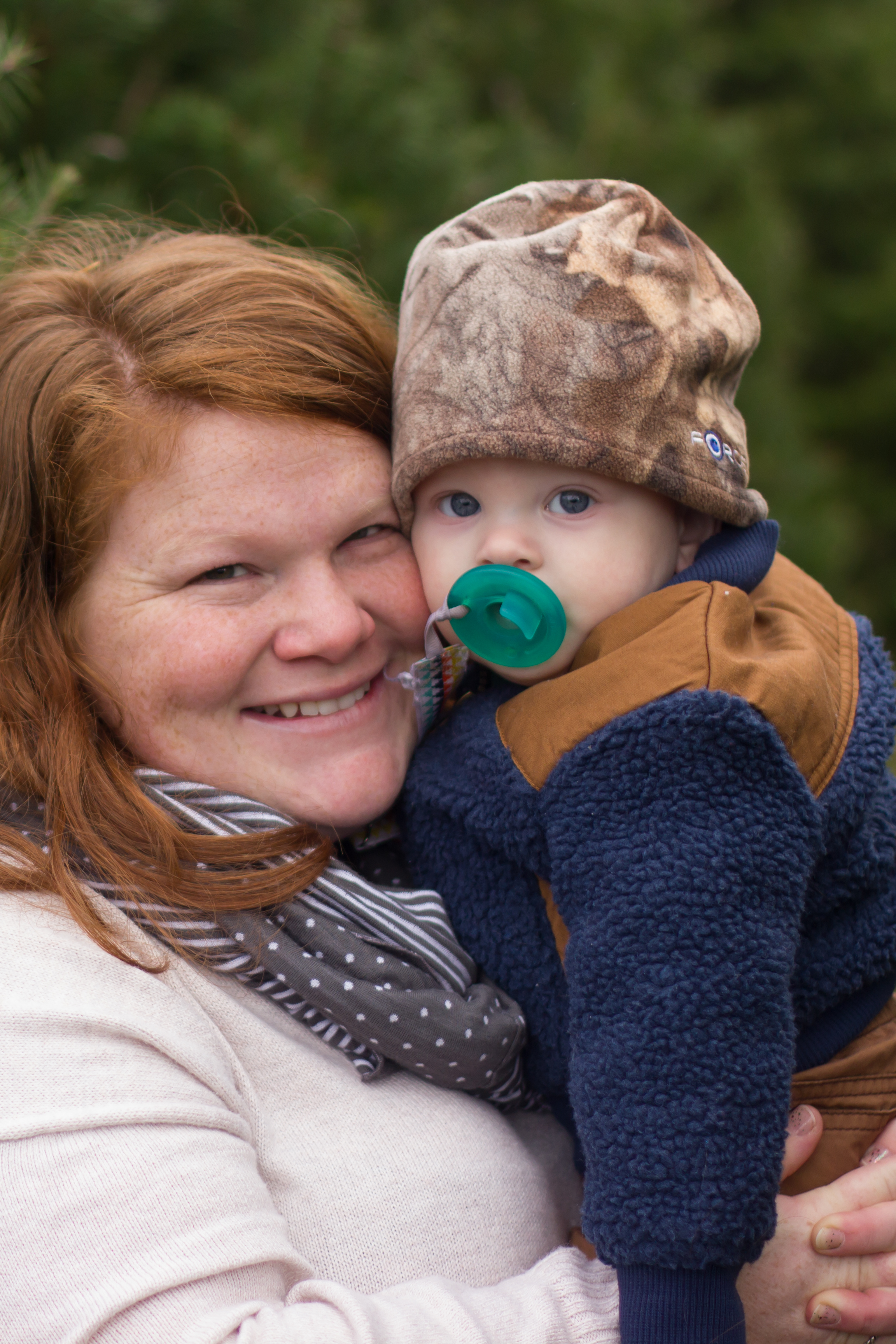 Brandy writes about motherhood, marriage, and their past struggle with infertility admitting that God's grace is needed everyday. She spends most of her days adventuring with her very own Christmas baby who was born December 26, 2015, around a year after she wrote her most read post "to the woman with BABY on her Christmas list."