Seasons of Parenting: finding comfort in nature as the children grow and family traditions change 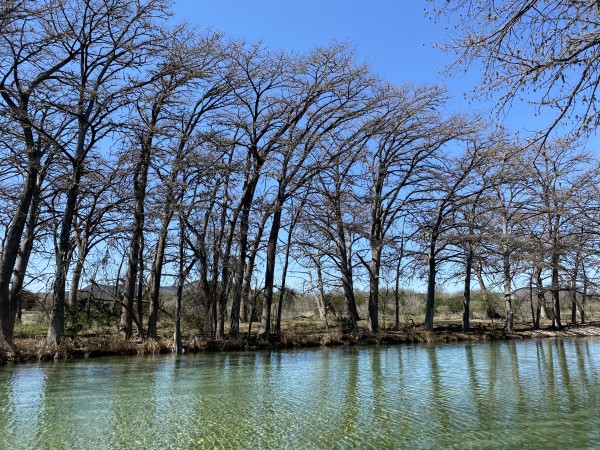 This Spring Break, we took a road trip to a cabin on the Frio River in Central Texas. Texas is a big state, with landscape that varies greatly by region. My husband and I sat on the bank of the river wondering what type of trees lined the banks. The trees had lost their leaves but still stood strong and deeply rooted, ready to enter the next season of their lives.

We had a new family experience this year, with my 16-year-old daughter going on a Spring Break trip with a friend instead of coming to the river cabin with the four of us. I took her to get appropriate clothes for the trip. I took her shopping for travel sized toiletries. I read from an online packing list for beach trips while she packed. But then, for the first time in 16 ½ years, I put her in the care of another family that headed east, and the four of us headed west.

The travel we have done over the past 16 years has been with the five of us. We have built so many memories in what I now see as the spring season of our parenting. Three births. Three preschoolers. Three elementary-aged children. But then they hit middle school and then high school, and the time is starting to pass so quickly. As my oldest nears the end of her junior year, this parenting season feels like it’s coming to a crossroads.

It surely won’t feel like a big deal to some families that one child or two has different travel plans than the rest of the family. But as I think back on our family’s trips, when one of us went somewhere, the other four generally came along. I have always held my kids close, sometimes too close.

The four of us had a relaxing time on the Frio River. We watched the boys paddleboard and float in innertubes on the river. We played the giant Connect Four game on the lawn. Watched the brotherly tetherball game devolve into a brotherly wrestling match. But something felt like it was missing, and we all four knew who it was.

We raise our children to launch from their homes of origin. We want them to be strong and opinionated and respectful, ready to take on the world. My mom has told me the only thing worse than my kids’ launching into the world is their failing to launch and living on my couch into adulthood.

I am proud of my daughter, and all three of my kids, because I know they will find their way outside the confines of the five of us. I am proud that she’s made friends whose parents I trust to take her across the country. But the change of seasons is hard. In a way, I want the five of us to last forever. My kids will adapt, but will I be able to?

I wasn’t going to write about this, but then I saw other families posting photos of their changing-seasons families as well, and I know so many of us are going through the same thing. I saw a family of five, like ours, posting from a state park as a group of four. I know their son is off at college and that he’s becoming who he’s supposed to be. I know the family who has my daughter is missing their son, who is also in college and finding his way. They, too, are taking photos of four instead of five, and of three instead of four.

And sitting at the beginning of the spring season of parenting are my niece and her husband, sending photos of their family of three that is about to become four. Nothing is static. Time marches on, and births and deaths and life circumstances march on, too.

Standing at the threshold of the change of seasons is hard. Knowing my daughter has one more year at home means I’m going to have more and more tastes of what it’s going to be like as our family morphs. I know it’s how it’s supposed to be, but knowing it does not make it less hard.

When the kids are young, it feels like the spring season of parenting will last forever. But some day, your adolescent will start to veer off on her own. And you’ll be crying by the river like I was this week. Enjoy your family as it is, whatever season you’re in. The seasons will change and force you to change with them.

The trees on the banks of the Frio River, by the way, are bald cypress trees. They are very tall, with thick trunks and empty branches for this particular season, coming out of a hard Texas freeze a month ago. The Texas Parks and Wildlife website says that bald cypress trees live up to 600 years, and sometimes up to 1200 years. The website also says that “cypress is also called the ‘wood eternal’ because the heartwood is resistant to decay.”

I like to think of our family growing and changing and surviving with the seasons like a big cypress tree, strong and firmly rooted yet reaching to the sky. But I also like to think of parental love being like the “wood eternal” of a bald cypress. Long-lasting and resistant to decay, no matter what life brings.

The Little Tree That Could
Spring Break FOMO: Parenting Lessons From Bass Pro Shop
Encouraging Their Talents: Helping My Children Find and Hone Their Gifts
advertisement

The Little Tree That Could
Spring Break FOMO: Parenting Lessons From Bass Pro Shop
Encouraging Their Talents: Helping My Children Find and Hone Their Gifts