Raising Kind Kids: Be nice to the boy who likes you.

Published by Jill Simonian on November 23, 2015

We all want kind kids. We all need kind kids (especially now). And if we don't raise them, nobody else will. It's not easy. It takes time and attention. And perseverance. And repetition. And possible consequence when the alternative to kindness rears it's ugly head (because yes, all kids can be kind... but all kids also have the tendency to be not so nice as well, mine included). So I'm staying alert and vigilant to keep my girls in line and call them out when called for.

Some of the general rules at my house? Say please when asking for something. Say thank you when you get something. Take your dirty dish up to the sink. If a friend looks sad at school, ask if they need a hug. If your teacher asks you to help hand out papers, say yes and offer assistance with a smile. Help Mommy decide which old toys and clothes to donate to 'all the babies who need them.' Tell Grandma her hair looks nice when she comes to visit. Smile and be happy with what you have. Tell your sister how much you love her for no reason at all. 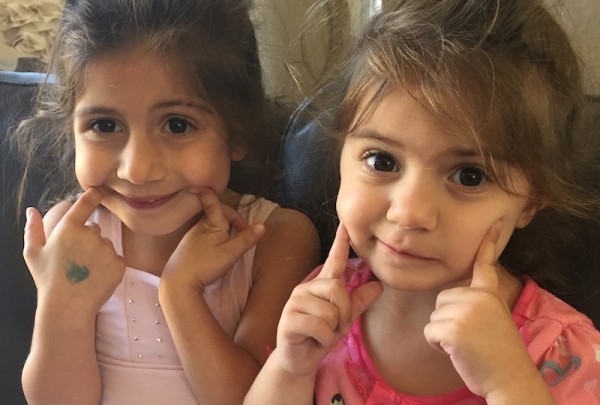 And don't ever be mean to the boy who thinks you're pretty.

You heard me. I mean it.

Don't ever be mean to the boy who thinks you're pretty.

Because, even though that boy might be different than you, seem and act a little strange, have a hard-to-relate-to developmental challenge or maybe have an unfortunate habit of picking his nose (yuk!) -- he's a person just like you. He has feelings... he has a mommy... and he appreciates the person you happen to be. (Yes, these are my own mom's words.)

When I was a big and all-powerful sixth grader, a fourth grader gave me a red rose and a white teddy bear that said "Be Mine" on Valentine's Day... on the playground right in front of everybody. Looking back, he was an adorable and sweet little guy but I was mortified beyond belief. My feelings were not mutual. I remember most lookers-on laughing at him and myself acting embarrassed and annoyed when this sweet kid put his heart on the line. (Forgive me, I was 12.) But through my panic I managed to say 'thank you' before running away and hiding behind the biggest tree in the yard... Don't ever be mean to the boy who thinks you're pretty.

When I was in high school, there was a developmentally-challenged young man in one of my classes who gave me a personally-tailored mixed tape of love songs along with a handwritten note that I remember being very thoughtful as I read it. Most of the kids in our class poked fun at this young man behind his back on a daily basis and I always felt sorry for him. And even though I genuinely felt compassion for his life's challenges, I was still an insecure high school student who struggled with how to be 'cool' in front of my peers. Despite my embarrassment, I smiled and thanked him for his mixed tape and complimentary card... in front everyone watching me. It wasn't easy. Don't ever be mean to the boy who thinks you're pretty.

I remember going home and telling my mom about these things when they happened. I remember her initial response for each incident being: "Well I hope you were nice to him..." And yes, her words were said in a semi-threatening and very authoritative tone that only moms can pull off. I also remember knowing that, if my answer to her question were to be "No, I wasn't nice to him," then I'd be in big trouble. I feared my mom's disappointment and consequences much more than I feared the pressure of my peers.

Don't ever be mean to the boy who thinks you're pretty. Because he has feelings and a mommy and appreciates the person you happen to be... and you'll also disappoint your own mom (big time).

Just the other day, my Kindergartner came home and reported with a scowl that one of her classmates, a little boy who happens to be adorable, informed her that he was going to marry her. "Well I hope you were nice to him," I said, eyebrows raised (authoritative tone included). Her eyes got really wide. My message was seemingly clear.

As parents, it's our job to set a code of expectations and initiate continuing dialogues about what's important for our kids to learn and how we expect them to act towards others... regardless if the means to the end at first seem trite (i.e.: disappointing your mother). Kindness is not a fluffy concept that happens naturally with kids... it's something we must initiate be example, consciously guide and re-teach again until it becomes ingrained and inseparable from who our kids are growing up to be. Choosing kindness becomes a habit... but you have to choose to make it a habit.

Because, as adults, we know that kindness counts... in this life and beyond.

So I'm trying to teach my girls, prepare my girls and, if necessary, make my disappointment severely evident when they choose against opting for kindness. And maybe I'll dig up and listen to that mixed tape again... just to keep me committed. (Anybody have a cassette player laying around?)

Jill Simonian is TV/media host/contributor, blogger & author with more than 200 on-air parenting/lifestyle segments to her credit. Her debut book for first-time pregnancy, The FAB Mom's Guide: How to Get Over the Bump & Bounce Back Fast After Baby is available now. TheFabMom.com details Jill's tips to keep life as focused as possible after babies (f-a-b). She writes for several parenting websites & lives in Los Angeles with her husband & daughters.