Play Dating Isn't for the Faint of Heart 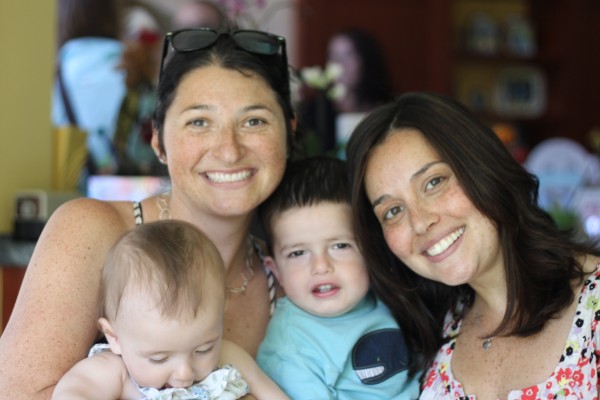 Loneliness and boredom work tirelessly as the joint heads of business development at Match.com. After my daughter’s first birthday, a perfect storm blew the undesirable pair back into my life.

Thanks to a grab-bag of common ailments, throughout her infancy feedings had been all-consuming (pun intended). At around the twelve-month mark though, they suddenly started to fly by, and doctors appointments dwindled too. That same week, she dropped her morning nap, and my husband took on a new role at work that often kept him in the office until midnight.

It felt like my manager had eliminated a good chunk of my duties, cut my break time by half, and extended my shift by hours without providing anything novel to fill my time, or even just an officemate capable of gossiping or waxing philosophic (my workday companion may have been waxing, but it certainly wasn’t in English).

Not helping matters was a serious dearth of adult companionship. For reasons that made sense to a childless couple, we scheduled our move from Boston to Seattle, where we knew exactly two people, for 11 days after the birth. Most of the friends I managed to make that first year were either (1) single people who love spending time around kids, in very limited amounts, (2) working moms, available only on weekends when I jealously hoarded our time for Daddy, or (3) other hospital moms, largely inaccessible in person thanks to their high-maintenance kids.

Then there was Kate, the mommy friend gold standard with whom I connected at the biweekly support group I managed to attend four times in a year. I first developed a crush on Kate when she responded as follows to her three-month-old daughter’s inadvertent brushing of my little one’s knee: “I’m going to have to have the ‘not everyone is aware of their sexual preference as early as you’ talk with her.” With an acerbic wit and strong sense of self carefully disguising her mushy insides, she reminded me of my pre-kids friends.

Unfortunately, our weekly play date occurred about as reliably as the Cubs bring home the pennant thanks to our health issues, Kate’s part time work as a sex crimes prosecutor (“I just got slammed with work,” she texted, “stupid criminal pervs”), her kid’s bout of viral pneumonia, Kate’s purchase of a “cursed” house (“I’m about one more catastrophe from digging in my basement ala Amityville Horror to find the freakin’ Native American burial ground we are tromping on”), and several months lost in the one-nap baby/two-nap baby Bermuda triangle (each only awakes when the other sleeps). For all intents and purposes, Kate was the one who got away.

That left me with, well, no one.

I figured mommy friendship would come easy, but as my brother-in-law theorized, finding parent buddies turns out to be uniquely difficult since on top of all one’s standard criteria, a somewhat similar childrearing ethos is required. As my experience with Kate demonstrates, even once you identify a comrade in arms, the complication of scheduling for four—at least two of whom can’t be reasoned with—often torpedoes rendezvous.

After a week of gritting my teeth and clinging to my activity lineup like a door floating in the wreckage of the Titanic (which, by the way, I truly think would have supported the weight of both Leonardo DiCaprio and Kate Winslet if they’d made a proper effort to counterbalance), a meltdown on the way home from the biannual company picnic (mine, not the baby’s), and a long bath lovingly drawn by the individual drenched in the emotional shrapnel of the explosion, I decided to get proactive.

My initial plan: sign up for all the mommy-and-me classes within walking distance of our apartment. I scoured the web and inquired at local businesses, but my flawlessly executed strategy resulted in a total enrollment of zero. All the classes I’d fantasized about while caressing my growing belly took place in the suburbs. The downtown yoga studios, dance halls, language centers, and even the YMCA were bereft of children’s programming, presumably because the core of the city couldn’t muster a critical mass of families. Oh, how I missed Manhattan.

During week two of the search and rescue mission for my sanity, I got desperate and aggressive. Like many fitting this description, I trolled the internet, increased my investment, and lowered barriers to entry.

Enter Meetup.com, a website designed to connect individuals with similar interests who live in the same area but otherwise likely would never meet (e.g., “Puget Sound Active Jewish Singles”). The “Seattle Stay at Home Moms” group alerted me to a church five blocks from our apartment that opens its stocked playroom to the community every Wednesday morning. We started going religiously (pun intended, yes, again), and even scheduled a play date or two with other attendees. Progress.

The contentment produced by this recurring calendar entry and its spinoffs inspired a join-a-thon that created an inverse relationship between my happiness and our bank account balance. When we stumbled upon a playroom tucked into a corner of the Seattle Art Museum, I coughed up eighty dollars for an annual membership. After reading about the toddler area at the Children’s Museum, I doled out another fifty. The Pacific Science Center membership followed; after all, who can argue with “Tropical Butterfly Greenhouse, Preschool All-Star Planetarium, Pacific Tide Pool, and Just for Tots! Play Area”?!

Then, in an attempt to stop the financial hemorrhaging, I decided to withstand the dirty looks brought on by frequently taking my toddler to three nearby toy stores (four, if you count the toy aisle at Ross) just to “look.”

Finally, I mustered up the courage to give out my email to any caretaker who seemed remotely sane and clever. If you’re picturing me cruising area kids’ spots and hitting on unsuspecting moms, you’re getting the right idea. I suffered a crushing rejection (“Sorry, we live in Brooklyn.”), experienced second thoughts about my new lowered standards (“Seriously,” my husband asked, “she only speaks Japanese?”), sensed that a potential para-mom-our could smell the desperation on me (the part-time psychiatrist never emailed), had to dial down the “accent bump” that made every UK transplant seem at least forty percent funnier (yes, the South African too), and scored a first date with a very attractive candidate (a vet who laughed at my jokes).

Six years later, Kate is the only one I still regularly connect with. We’ve moved to San Francisco and found friends in neighbors, parents of classmates, and pre-baby buddies who’ve now procreated themselves. But I’ll always be grateful for the companionship of those less-than-perfect-fit mamas; they got me through the pre-verbal years. If I were single, now would be the time to cancel the Tinder account, stop chatting up dudes in bars, and enjoy a few martinis with my chosen one.

In play dating as in romance, finding love is the goal, but that doesn’t mean one can’t look back fondly on the search.