Pilates in the Pandemic

Once the schools closed and Governor Roy Cooper announced stay-at-home orders for North Carolina, we entered into a new reality. I was already a work-at-home mom, but now the kids were home with me too, something a lot of us are dealing with all across the United States. It meant merging schedules, changing up routines, and figuring out a new normal.

One thing that I tried to keep from changing was my workout routine. Now, I’m not an exercise fanatic, by any means. I’m not hitting the gym pumping iron. But during the school year I try to fit in a couple of work outs a week to help keep me in shape and mentally sane. I like to run a couple of miles with our geriatric dog, or do a workout video (at my own pace) in the living room. My favorite is Jillian Michael’s yoga, a weird sort of cardio/yoga workout routine. A couple of years ago I expanded on that, adding Tony Horton’s P90X3 Pilates into the mix. I had seen an interview with Gwyneth Paltrow who said all she did was Pilates every day, and I was sold.

“What about summer?” you might be asking. Workout time disappears in the summer, and is replaced instead with things I do with the kids, like afternoons at the pool, hikes through the woods, bike rides, etc.

When schools closed in March due to the pandemic, you might have thought that meant my summer routine started early. But instead, being a person resistant to change, I decided to incorporate the kids into my twice-weekly workouts. At first it was pretty seamless. Caroline was smack dab in the middle of soccer season, and with the idea that the closure was just for two weeks, the coach was encouraging kids to work out at home to be ready to get back into games when they got the green light. So a couple of times that first week we ran together, and drug Carter along with us.

Then the weather turned cold and rainy. Work out day came and running was out of the question. I told the kids we were going to do Pilates instead. Carter said anything that sounded like a pirate must be good. We spread out our yoga mats in the basement, got our water ready, and booted up the video.

Almost immediately I regretted my decision. I had forgotten how hard it was to do those that workout the first time. Exercises I had under my belt from multiple repetitions were all completely new to the kids, and unlike anything they’d ever done before. Add to that, to really get the core work of Pilates in, you have to concentrate on breathing. That was nearly impossible to do when the kids were constantly laughing at each other as they mimicked the people on TV.

Halfway through the workout I found myself flat on my back, staring up at the ceiling and holding my breath to try not to yell at the kids to be quiet and take things seriously for the tenth time in probably five minutes. My frustration level was high. I had a busy day of work ahead of me, and I was seriously trying to fit in a good workout in an otherwise sedentary day of sitting at my computer.

But then I turned around and saw Carter trying his hardest to write out the alphabet with his feet in the air. Caroline was laughing her head off at him while trying to fight the puppy off her mat.

At that moment, I had an epiphany. Laying on the basement floor, surrounded by my kids and the two dogs, my emotions changed in an instant. I started laughing too. I let go of the frustration of not getting in a good Pilates workout, and more than that, I let go of the tensions of the previous days — the worries of the virus, the questions of whether we’d go back to school ever this spring, the anxiety of whether to cancel our summer vacation, all of that melted away. I realized that this was what mattered right now — laughing and spending time with each other.

I can still remember clearly the first time I encountered the word epiphany. Sitting in a literature class at Davidson, with James Joyce’s A Portrait of the Artist as a Young Man open on my desk, the professor asked us to share an epiphany we’d had in our own lives. I felt like all the other students already knew what this word meant, but I was struggling to figure it out how it applied to Dedalus, let alone me. Now I have the perfect example.

After that day, I changed my tactic when it comes to workouts. I’m keeping with my original plan of at least two workouts a week, to help keep some semblance of structure in our lives and get my exercise in. (I’m not so worried about the kids’ physical activity, they’re jumping on the trampoline, riding bikes or doing something outside almost every day.) The difference is now, the kids are in charge. Caroline has already led us in a workout routine she found on TikTok. Carter got us all out on bikes. And one day we went to the church across the street to run laps around the cemetery with the dog. She loved it!

In a few short years Caroline and Carter will be off on their own, starting their careers and families, and I’ll have all the time in the world to do a quiet yoga meditation or concentrate on a Pilates workout. For now, I’m going to enjoy the fact that I get to spend some time together with these kids, no matter what shape that takes. 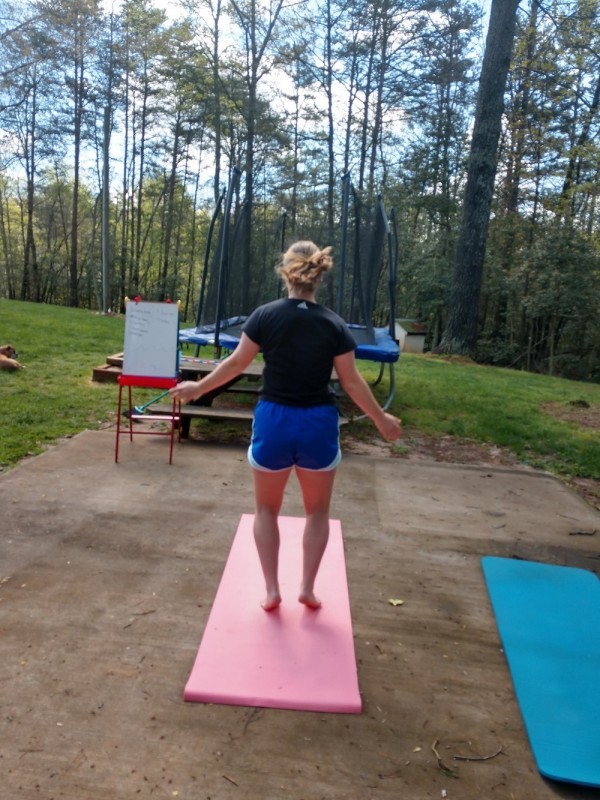 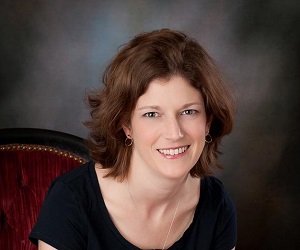 Karen Alley is a mom of two at home, a stepmom to an adult (out of the house) stepson, and a devoted wife and dog mom. She stays busy as a freelance writer/editor, while trying to make time for her other passions of gardening, reading and watching movies of all sorts. Her writing has been published in Carolina Parent, Motherly, Walmart World, and O. Henry Magazine.

Working out as a Stay at Home Mom
The Couple That Sweats Together: How Our Morning Routine Brought Us Closer Together
5 Things To Help Even The Busiest Person Find Time To Exercise
advertisement

Working out as a Stay at Home Mom
The Couple That Sweats Together: How Our Morning Routine Brought Us Closer Together
5 Things To Help Even The Busiest Person Find Time To Exercise