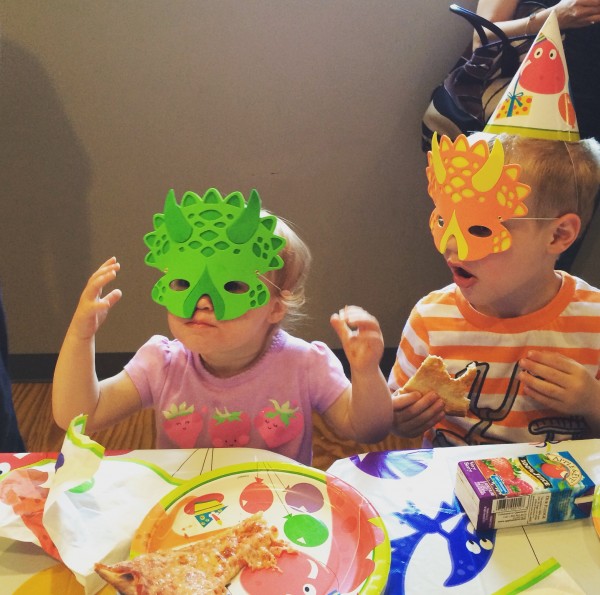 Attending birthday parties now creates much less stress than it did two years ago. Then, parties meant running around after my son hoping to prevent injuries to himself and others, apologizing for the mess of toys and food in his wake, and dramatic exits when the inevitable meltdown ensued. I never knew how these parties would go and worried with each one that it may be our last as the word spread about my little party-pooper. Over the past two years though, I have learned some party attendee strategies that have helped the entire experience be more enjoyable for everyone and thought I should share the secrets to our success with you. This is by no means Evidence Based Medicine (EBM), but it is in my experience another form of EBM: Evidence Based Motherhood.

1. Set the stage: I’ve always been a planner, so I have started including my son in what those plans are. I will tell him “today we are going to do X and after that we will do Y and then we will finish with Z.” If we are going to a party, I include where it is and who will be there. I give him a heads up as the party is approaching and we discuss it afterwards to wrap it up. I think this gives him control that he otherwise doesn’t have over these situations.

2. BYOT: bring your own toy. For my toddler, the garbage truck is like his security blanket. I found that although we could be surrounded by hundreds of toys, he inevitably would start crying for his own truck, so bringing it along gives us something familiar to fall back on. The problem though is that other children also want to play with the truck we bring along, so there is often a sharing issue, but I would rather navigate that than a truck-less party. Usually after the initial warm-up phase he is willing to share his truck and enjoy the novelty of the party toys.

3. Arrive early: I tend to be more of a fashionably late person myself. Typically because I underestimate how much time it takes me to get out of the house and not because I am trying to make a statement. It is much harder for my son to acclimate to a party that is in full swing though. I can sympathize with him about how overwhelming this is when you do not know the other attendees. So for his sake, I aim to be early, or at least on time. This allows him to get familiar with his new surroundings before the crowds descend.

4. Eat the food: In the beginning, I tried hard to offer only the healthy party food options (“here, have some grapes” and ignore those giant jelly donuts over there) and would pace his eating. I have seen though that sitting and having a snack that he enjoys allows him to relax and take in the scenery, in a way that he is unable to do without the facilitation of food. I have also learned to let him enjoy the gluttony of a birthday party—this is a time for cake, donuts, and sugar! Perhaps I am teaching him to use food as a crutch and will regret this strategy when he is an overweight middle-aged man, but I’ll deal with that problem then.

5. Don’t push your luck: If things were going well I used to try to optimize this and stay as long as possible. Inevitably though I would stay about 5 minutes too long and then end up leaving shamefully carrying my toddler kicking and screaming. Knowing his personality and schedule, I can pick up on subtle signs that he is getting tired, hungry, and partied-out. If I listen to these cues and make a quick exit when they appear, we can leave gracefully. It is only when I am not responsive to his signals that we end up leaving on a bad note.

For many moms, attending a birthday party does not take such planning and strategizing, but I have found it makes our party-going experience much more pleasurable. Hopefully, it also makes us better guests when you invite us over too!

[A version of this post appeared previously on Mommy Call on 7/30/13.]

Birthday Party? No Thanks, Mom!
8 ways to deal with the stress of a party with an autistic child
I feel bad for not understanding the importance of an RSVP
advertisement

Birthday Party? No Thanks, Mom!
8 ways to deal with the stress of a party with an autistic child
I feel bad for not understanding the importance of an RSVP