Hey, parents. Are your kids starting to think about education after high school? Well, grab your mobile device or your joystick console, for you're about to play the craziest video game ever: College Admission Battleground.

A quick note before playing: This game is only for those unwilling to bribe university officials or coaches with large sums of money in exchange for acceptance to the Privileged University of Wherever. If you choose this route, turn off your phones or game players now. You won't need them. Unless your bribery method involves Apple Pay. 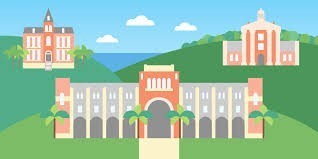 For the rest of you, choose a game avatar. And be truthful, even though you may be tempted to alter your skin tone in hopes of your son or daughter passing for whatever ethnicity the college currently lacks. Better to fight and claw your way through the admissions maze using other tricks, many of which will be spelled out in this tutorial. Your goal is to be the last parent standing, thereby earning an automatic acceptance letter.

Now parachute into the college of your child's choice, landing in an idyllic zone of cobblestones, greenery and construction cranes erecting new dormitories containing Jacuzzi tubs, squash courts and cafeterias serving only grass-fed beef. Beware! The zone shrinks as enemies appear, determined to dash your child's dreams. Isn't that the SAT Ninja lurking in the corner, ready to inform your child that his or her scores are "respectable" but not quite up to standards? Blast this annoying character with the weapon of your choice.

Yes, College Admission Battleground contains a large cache of available munitions. Pick whichever gives you a clear-cut advantage over your competitors. On your shoulder, you can carry Rich Uncle Alumnus. This weapon is key if you are playing Battleground: Private University Edition. Obscenely Wealthy Uncle Alumnus, while difficult to obtain, is mandatory if that university is Ivy League. If you are fortunate enough to secure the latter, you may hurl it at a building during the game and the uncle's last name will magically appear on the building's exterior. A side door to the university president's office opens simultaneously.

For those not fortunate enough to open that door, steer your avatar to the dreaded Admissions Office, where other villains await. They include the Tuition Hiker and The Financial Aid Rejecter. You'll need all your Battleground skills, for the two work in tandem. Simply eliminating the Tuition Hiker does not mean you're in the clear, for the Financial Aid Rejecter, armed with copies of your tax returns and bank statements, can approach at any time and inform you your gross annual income exceeds, by 8 cents, financial aid eligibility. At this moment, the Tuition Hiker usually reappears. In College Admission Battleground, that character never really dies.

Still standing? You're doing well, as most players have, by now, been eliminated and are playing Community College Battleground, a much easier and less confusing game. However, you still have to master the Application Vortex.

Weapons in the vortex are useless; you must rely solely on your wits as you answer questions like, "Are you, or your child, of Native American heritage?" Possible answers include "Yes," "No" and "Hold on while I order an online ancestry kit." Choose the latter option at your own peril, for you may be passed by other parents who were tipped to this question's existence. They ordered the kit and now have ample evidence that yes, their child is indeed one-sixty-fourth Native American. The game's most coveted character, the Full Scholarship Provider, appears and escorts these parents into the Welcome Zone.

If you are indeed the last parent standing, congratulations! Your child has been accepted. But don't, for one minute, think you will never have to play this game again.

The Tuition Hiker and the Financial Aid Rejecter are lurking nearby for four years. Or more if you choose to play Grad School Battleground.

12 Factors to Consider When Choosing a College: Balancing Academics with Happiness
How Much Is Enough?
Seniors in High School? How did THAT happen?
advertisement

12 Factors to Consider When Choosing a College: Balancing Academics with Happiness
How Much Is Enough?
Seniors in High School? How did THAT happen?