Published by Danielle Sherman-Lazar on July 12, 2020 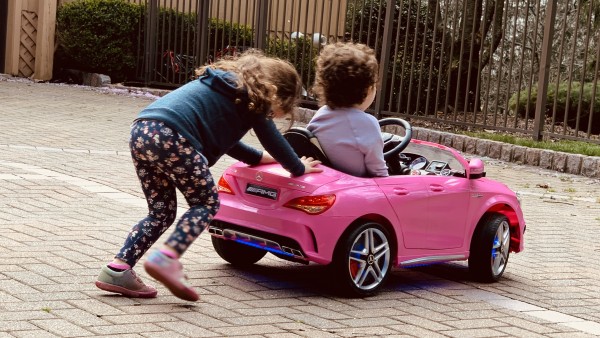 “Mommy, you're scratching me too soft,” my four-year-old fidgeted around at bedtime.

I paused, then resumed scratching.

“Ouch, now your ring cut me,” she moaned and jumped up.

“Honey, my ring is on my other hand,” I stated matter-of-factly, dead-panning, because gosh, it’s always something, and my left hand was resting on the pillow above her.

This was how our day ended—

and everything in-between was hard too with my strong-willed child.

Because it always is.

At one point, she had me shaking with anger, my fury burning me on the way out.

We were outside, and while I was helping my two youngest children into the trampoline, my four-year-old was driving her car behind me.

I turned around to check on her, and she was gone.

I ran into the street, baby on my hip, breathing erratic, calling her name.

And there she was pulling into the driveway from the street…

…and my fury came out as hot as any dragon has ever flamed.

She could have gotten hit by a car.

She knows she can't go into the street alone.

So many bad thoughts raced through my mind and out of my mouth.

And, want to hear her response?

"Well, mom, you should have been watching me."

….and I shook with anger. I thought my eyes were going to pop out of my head. My face, red. I wanted to take my four-year-old teenager and shake some sense into her.

And I feel like this often with my strong-willed child.

Because even if she knows she’ll get in trouble,

she can’t accept no when her heart’s so set on yes.

And look, I don’t attend every argument she invites me to,

but today she crossed a line.

And it’s hard not to fear the human she’ll become.

But she’ll be more than okay….

…because she’ll be impervious to outside pressure.

…because she’ll push through barriers,

and no one will stand in her way—

not even me, her mother.

And that kind of determination and self-motivation is world-changing.

So, yes, our strong-willed children are challenging when they’re young.

and that’ll be even more satisfying to witness than a kid who simply obeys.

My firecracker daughter
We Can't Give up on Our Strong-Willed Kids: They Are Listening
This change it hard for our kids too, so let's practice grace in the face of bad behavior
advertisement

My firecracker daughter
We Can't Give up on Our Strong-Willed Kids: They Are Listening
This change it hard for our kids too, so let's practice grace in the face of bad behavior