When the husband goes away … all the damn animals in the forest come out to play. I often wonder if there is a whisper down the outdoor system in place. A notification, if you will, that the “City Girl” is home alone and on watch for anything odd. I used to wonder if the wilds upped their game as they witnessed me settling into this life on the prairie. I wonder no more.

“Wonder” was squashed by a possum’s failed (thank you six-pound baby Jesus) attempt to enter our home via the pet door.

Yes, I know. What do you expect if you have a pet door??? I expect the fenced-in yard to serve as the first line of defense, our dogs to serve as the second, and the actual pet door to be above the level of difficulty that the wilds are accustomed to.

Yes, I know. Haven’t you lived in the sticks for like a decade??? Yes. Calm down, Pa Ingalls, I have gotten better. In some areas. Like moving small spiders out the door unharmed. Mostly unharmed. It’s not important. Apparently burning down the house is never an option.

The wild that resides right outside our back doors? They are escalating. I’m sure of it.

Some history: I moved here from Raleigh (the city). I didn’t live in the city proper, but it was metro enough nary to witness anything more wild than the beaver that lived in the manmade lake, behind my townhouse, paddling around on a warm day. Perfect.

It did not take much time for me to experience the wild after moving to my new Virginia home on the range. My home, which I’m told is not actually in the sticks at all (though it’s all I seem to find when I walk outdoors). I stand by my first impressions. I sometimes wish to flee back to a land of sidewalks. So maybe we are not worthy of “the sticks,” but we are definitely further yonder than I’ve ever been before.

First wildlife encounter? Deer. Lots of Deer. Evidently, our home marked the path to a good night’s sleep and I watched, terrified, as a small herd appeared each evening to stroll confidently through our front yard, around to our sideyard, and down through the backyard before bedding down in the old lakebed just beyond our unofficial lot line. It wasn’t the first time I’d seen deer of course, but it was the first time I was less than thirty feet from them. They seemed so much smaller from the safety of a passing car!

In the name of establishing myself as a peaceful neighbor, I insisted that we head to the local farm store (Wait, what? We had a local farm store?) to pick up a salt lick and some deer feed. I then waited and watched each night from the safety of our second-floor screened porch to see if I’d sparked a friendship. It took less than a week for Jane and Henry Fawnda to make “let’s grab a snack” part of their walk. I swear, Henry even winked at me on occasion.

This project was short-lived when the two alerted some friends. I believe it was shortly after Bo Deerick, Jayne Doe, Buck Lightyear, and Aunt Lerr arrived that Rich suggested maybe we not continue replenishing the pit stop.

My next encounter? Raccoons. Of course, why not? When we’d moved to the house we brought with us three cats. We added a dog shortly after and our yellow cat, Meowlynn, packed his belongings and moved to the garage. Fine. We realized that he had no intention of returning inside unless forced and being forced guaranteed life as a human pin cushion. Fine. We built him a small apartment on the shelves, including a dining area.

And then it happened.

Rich was away on a business trip. Of course, he was! The kids were in bed. I was shutting down the house as responsible adults do, including pushing the button on the garage door to lower it almost all the way so that Meowlynn could still come in. I wiped down the kitchen, started the dishwasher, and hung up an errant coat on the way to the garage. I flung open the door and was met by a raccoon statue.

Except it wasn’t a statue. It was, like I, frozen in terror just as he was about to grab a handful of cat food. Did you know raccoons stand? They stand?!?

I shrieked, it shrieked (Did it? I don’t actually know). I fumbled to close the door (Should I? What should I be doing?). I paced the living room for several minutes. I went back to the garage and bravely (bravely!!!!) cracked the door about ¼ inch to peek out. The raccoon statue was gone.

The realization that we would have a cat food-addicted raccoon in our garage for the rest of this cat’s life arrived. I knew that this tiny Zorro would come back forever until the end of our garage cat’s time.

Which also happened while Rich was out of town.

Yes, that same cat quite literally dropped dead in the driveway one night between the time I had sent the kids down to collect the mail and the time they started back from the box. Other invasive “I’m adulting alone!” parties? Snakes, rabbits, birds, voles, and skanks - all delivered inside the house by a proud cat or dog as if to say, “It’s alright. I see you. I will at least assist with dinner plans while the other hooman is missing.”

The latest? A possum. Alive. Though, thankfully, playing quite dead.

Rich had not been on a business trip in nearly two years until just a few weeks ago. We actually relished this return to normal as he headed off to the airport early on a Sunday afternoon. In previous years, the kids and I had a system when Rich was out of town that included dinner out, dessert, later bedtimes, and (maybe) an extra hour of electronics.

These were my moments to maintain dominance in the category of “Favorite Parent.”

And so, that Sunday night, after dinner and dessert and while video games were happening in the next room, I noticed that our younger dog (Kylo) had been outside longer than usual. It is not uncommon for Kylo to lay out at length and enjoy the rain, snow, or freezing temperatures. I did not think much of it her absence on this night as we were just arriving in her favorite chilly season.

I did notice that, when Kylo did come in, she was quite distracted. She planted herself by the stairs to the basement rather than on the couch. I then noticed her Lassie-ing - beckoning me to come with her down into the basement. Welp. I walked by Zack on my way and said, “Well, Kylo wants to show me something in the basement so please be on high alert for a shriek.” Kylo, the most guilty of our animals when it came to bringing home friends, was not to be trusted.

At the bottom of the stairs, I looked left. Nothing. I looked right. Nothing.

Kylo had gone ahead and out through the pet door. Normal. Her dog sister did not follow. Also normal as Finley prefers to have hooman door opened for her exits. I looked out the top of the door and onto the porch. Nothing. I looked around the immediate yard. Nothing. 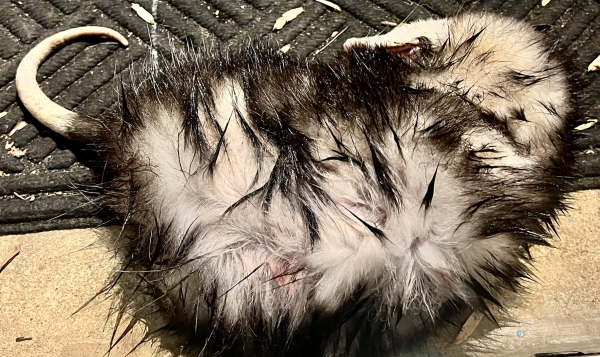 And, by “almost” I mean I somehow took an unplanned leap over this thing, past it, and onto the porch, while shrieking, without even hurting myself.

I waited for Zack to come sprinting. Nothing.

I shrieked again. Nothing.

I snapped a picture and sent it to Rich (in New York City).

I hopped back over the possum, sprinted to the bottom of the stairs, and shrieked once more.

I quickly explained the situation to Zack who responded with, “Wait now, what?”

Did this child really need me to explain it again? Yes.

Rich responded with a “do not touch it, grab a shovel and toss it outside the fence.”

For some reason, this triggered me to begin putting on my beekeeper suit. I do not know why.

I also grabbed a very large, clear plastic bin and placed it over the possum. I do not know why.

Zack, meanwhile, had calmly left me (alone) as he went to get a shovel from the garage. I suspect that is when he learned that I moved all the yard gear to our storage shed. He was gone for basically ever. Before his return, I realized that THIS POSSUM WAS FULLY ALIVE.

I thought maybe I could just drag the doormat, possum, and bin all together toward the yard while simultaneously having thoughts of this thing coming out of his nature-coma and flailing about.

And then I then saw exactly how many teeth it had. Did you know then when a possum plays dead it does so with its teeth bared to be more intimidating? I was intimidated. My next text to Rich read “It has too many teeth.” No context. Just that.

I tagged out just as Zack reappeared with a shovel.

The next moments were a blur (for me) but Zack did gently scoop up this not-dead-at-all possum and walked him to our sideyard for a mostly gentle release.

While he was doing that, I was inside removing my bee suit, collecting myself, and chatting with my box of wine.

Just as I settled onto the couch, I heard knocking. Dear Lord, now what? Had it returned? Can possums knock?

I crept back down the stairs to the basement. It was quite hard to see out the windows but there was definitely something peering in.

Was it a raccoon statue?

It was my child. I had locked him out in my hasty retreat.

I have rescinded this year’s application for “Favorite Parent.” 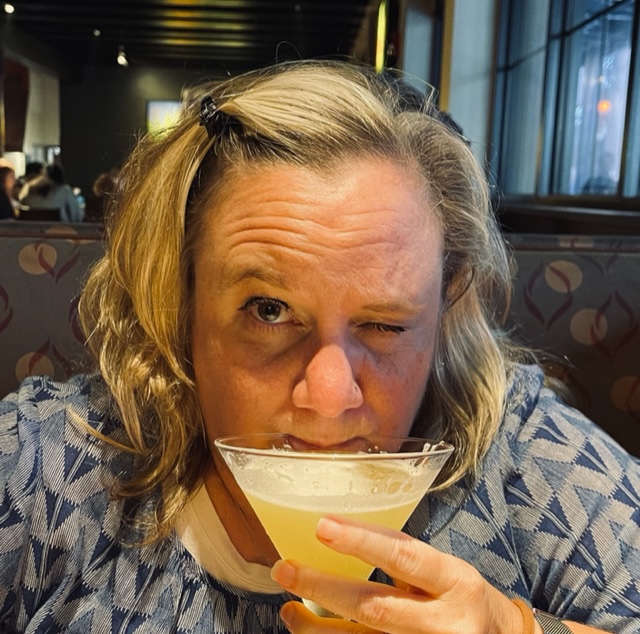 New home, big problems
What It's Like to Eat Out When You Have Kids
Why You Should Do a Family Halloween Costume
advertisement

New home, big problems
What It's Like to Eat Out When You Have Kids
Why You Should Do a Family Halloween Costume