My weird and wild sleepless night 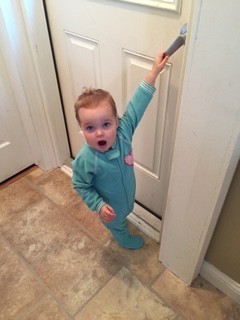 The night before my birthday, the baby started a hacking cough that forced me to pull an all-nighter. Morning came and it was time to “celebrate” my birthday with a trip to the Urgent Care clinic followed by back-to-back work meetings all day.

I wore (what I thought was) a cute oversized blue and white striped blouse paired with skinny black pants, black boots and a messy bun. But, after the baby sneezed, crinkled and clung to it, the blouse looked more like a nineteenth century men’s nightgown.

The messy bun fell out, so now my hair was matted on top and shaggy in the back. If you handed me a candle, I could’ve passed for Benjamin Franklin at bedtime.

Late in the day, I had a brilliant idea. If things weren’t going my way, maybe I should do something for myself on my birthday. What could I do that wouldn’t require a lot of planning or time? I decided on a visit to a psychic.

Based on the size of the scratching post in the middle of the room, it’s safe to say the psychic had at least 8 cats. I’m not afraid to visit a psychic I found online, but I AM afraid of large groups of cats. (A group of cats, I learned, is called a “clowder” or a “glaring.” Knowing this only made things worse.)

I mentally lint rolled my pants as we began my reading. I worried that if I stayed there long enough, I might start batting small toys around with my fists.

As if the scratching tower wasn’t enough, the psychic also had an affinity for religious dolls and vintage figurines. I wanted to make a sudden movement to see if the dolls’ eyes would follow. So, maybe they didn’t move while I was there, but I could still feel them judging me.

I wondered why he had so MANY of them. Does he talk to them after his clients leave? I imagined them convening...

“Hey, Porcelain Doll, what did you think of that lady? 1920's Wedding Cake Topper, do you want to weigh in on this one? Nun Dolls, quit chattering!”

In the end, the psychic told me some things that were completely generic and others that were spot-on. Really, I was just glad to have thirty minutes of time devoted to me. Even if I had to pay someone to take guesses about my future while I said a silent prayer that I would make it out alive.

Life is a messy place filled with cat towers, scary dolls and occasional sleepless nights. You're going to be tired and weird things are bound to happen. Try to enjoy it anyway.

Finding Joy
It's a harness. And it's fine.
A lived life is a messy life
advertisement

Finding Joy
It's a harness. And it's fine.
A lived life is a messy life