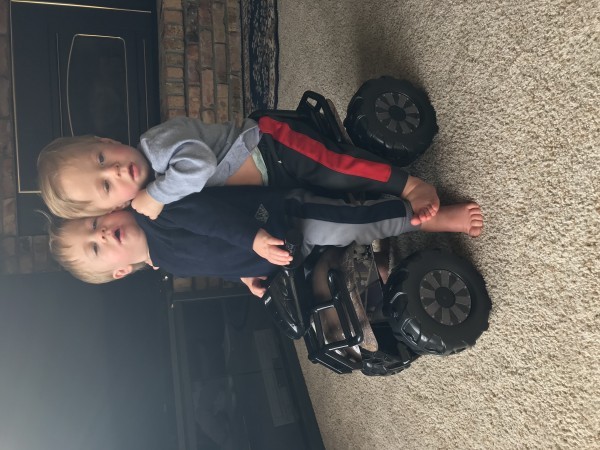 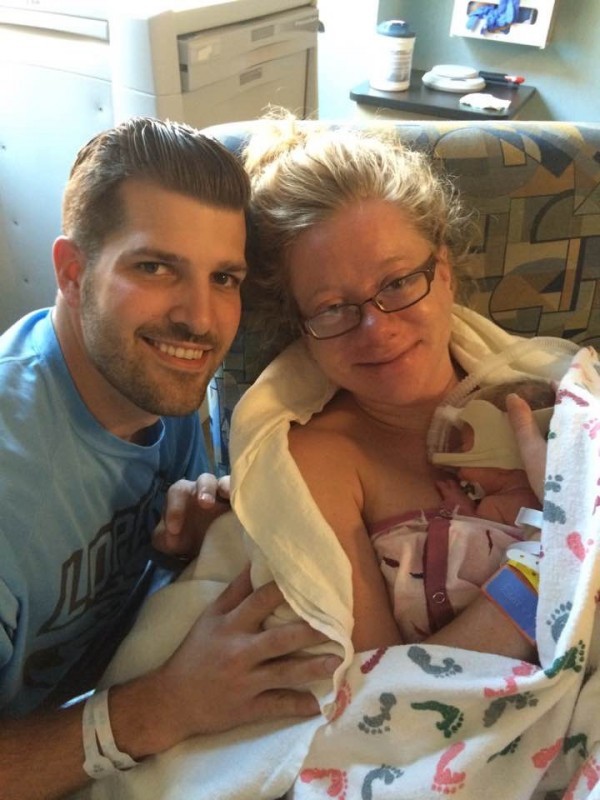 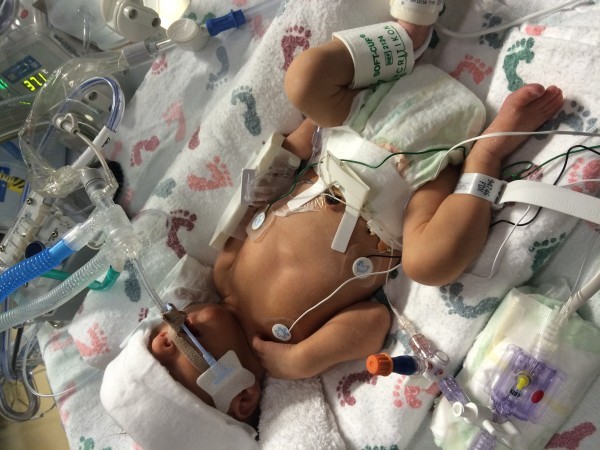 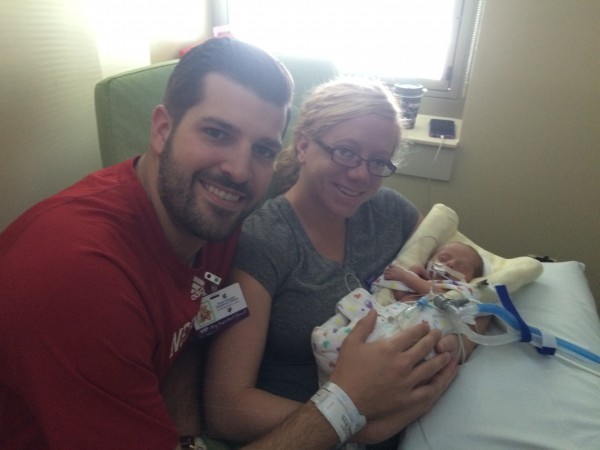 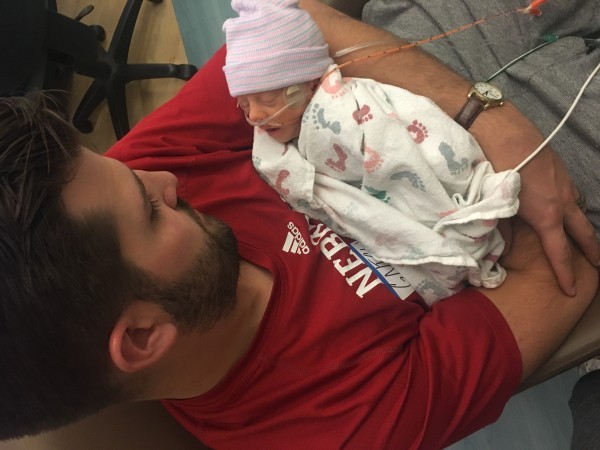 After trying for only two months, my husband and I were thrilled to find out we were expecting! We went into the doctors office around 8 weeks. While having my first ultra sound they found a heart beat. It was the happiest day of my life! I then asked “there is only one heart beat, correct?” The nurses gave each other a look and said “actually, ma’am, you are having twins!” We were in shock, but we were ready to take this challenge on!

Everything looked good as the time went on, but the doctor wanted me to go to a maternal fetal medice doctor to double check both babies were growing as they should. I was feeling great and thrilled to welcome two babies to the world! At 18 weeks we went in to check on our babies and also to find out the genders. We found out we were having baby boys! Then the doctor came in... We asked is everything okay? She told us we had a pretty severe case of twin-to-twin transfusion and needed to go to Denver to have surgery. That shattered my world.

The next day I went up to Denver to have an echo, an unltra sound, and an MRI done. At the end of this long, exhausting day the team of Doctors sat my husband and I down. Our options were surgery the next day or both my children would die. At 19 weeks, I successfully had surgery done. After surgery, the doctors told me most women deliver an average of 10 weeks after this surgery, so I needed to be on modified bed rest to give my children the most time in the womb.

I knew that I was going to deliver early, and my children would spend time in the NICU. I was preparing myself, but I figured the twin-to-twin transfusion would be the toughest bump.

I am so grateful I was able to hold my babies in until 35 weeks! On September 15th, I gave birth to my beautiful boys. Hudson was 4lbs 12 oz and Sawyer was 4 lbs 7oz. Their apgare test were great, but then it all went down from there. Both boys started to have a hard time breathing, and the team quickly took them to the NICU. I was not allowed to have that skin-to-skin with either one of my boys.

I was wheeled into the NICU a couple hours after their birth to look at them. Even though I was prepared to spend time in the NICU, no parent is ever ready for the signs of a NICU. Tubes, wires, IVs all hooked up to your tiny baby. I was not allowed to touch them because I couldn’t get out of bed. There were also a swarm of nurses and doctors around Sawyer all trying to figure out what is going on with my child, Sawyer. Everyone told me I needed to rest and could come visit tomorrow. As a mother, those are hard words to hear.

The next day, my one child, Sawyer, was still struggling to breathing. They asked to please only place a finger or two on him and please don’t speak. I’m the other room, Hudson, his twin brother, was doing good. I could at least touch and quietly talk to Hudson.

I was finally allowed to hold Hudson on September 17th. I was so thrilled, but felt guilty I wasn’t holding Sawyer. The doctors could not fully intabate Sawyer, and he was struggling. The team of doctors could not figure it out. They told me that Sawyer was going to get flown to Denver, 60 miles north of us, to spend time in that NICU and see an ENT. Hudson was going to stay in Colorado Springs because he was doing good.

On September 18th I watched my son, who I had not held yet, fly away in a helicopter to be 60 miles away from me. I had a c-section so I was not allowed to leave the hospital yet. To this day, I still feel the pain of not being able to hold my son and watching that helicopter leave with MY son. I felt as though they were my children, but they were not mine.

I was cleared to leave the hospital on September 19th. I can’t even explain the pain I was in to leave not pregnant and not able to bring my children home with me. I started to get resentful of the people leaving with their child or having perfect pregnancies. I wanted that, but no matter how much I wished, my children were in different NICUs and nothing going to change. From that moment on, I decided I need to be strong for my kids. This situation was not in my controll and I had to accept that.

I went to Denver on the 20th of September to be with Sawyer. I was in so much physical pain from my c-section, but it did not matter. Nothing was going to get in the way of my being by my child’s side. On that day the doctors preformed a scope. The scope finally told us answered. Sawyer has a sever case of tracheal stenosis. A date was set to preform surgery in which they would open his chest, do a bi-pass, cut his treacha, and scope his treacha together. His surgery date was set for the end of September. All this time, my husband and I are going back and forth daily to Denver and Colorado Springs to spend time with both our children.

On September 24th, 9 days after his birth, I held Sawyer. I am so grateful for that nurse who recognized the pain I was in because I had not held him. At this time Sawyer was intabated, but because of his stenosis, the tube had to be perfectly placed. Every time I held him, from here on out, it would irritate that tube. The day before surgery, I had held Sawyer for quit awhile in fear that this may be the last time I would hold him. While putting him back, the tube re-adjusted and really started to irritate him. My husband and I left to go be with Hudson for a few hours. That night, I received a call from the Doctor stating that Sawyer had pulled his tube out and he was breathing on his own. I was shocked, I was grateful, I was confused. I didn’t sleep that night wondering if surgery was still going to happen. I was also fearing I would get the call that he stopped breathing. My husband and I went up to Denver the next day not knowing what to expect. The Doctor said he was doing good, so they were going to postpone surgery until he was bigger. I was so happy because surgery on that small of a baby is dangerous, but I also wanted my baby home.

They allowed Sawyer to start getting milk, breathing with oxygen, and being held more. At this point, Hudson is doing fantastic, and he was allowed to come home on October 1st. We now have one son home and the other in Denver. My husband and I decided we would switch off days. He would go to Denver and be with Sawyer while I stayed home then next day I would go to Denver to be with Sawyer while he stayed home with Hudson.

The guilt I felt was unbearable. I felt guilty enjoying and laughing with Hudson. I felt guilty not being with whatever child I wasn’t with. I felt guilty I couldn’t give my husband the time he needed. Every day I would struggle.

Towards the end of October, Sawyer was doing so great. He was taking bottles and drinking all of it! He was weaning off oxygen. He wasn’t struggling to breath, but my doctors were still scared to send him home. One day I looked at Sawyer, and I just broke down. He wasn’t a newborn anymore, and I felt like I had been stripped of that time. I, again, felt guilty.

I sat down with the doctors and had a very serious conversation. I told them that if they were just waiting for him to get bigger to do the surgery, I needed him home. I couldn’t do it anymore. I couldn’t have my babies separate anymore. That’s when they agreed, hesitantly, to send him home. On November 9th after 55 days in the NICU, my husband and I took Sawyer home to be reunited with his brother, Hudson.

Still to this day, I have anxiety going back to have Sawyer checked. I still feel guilty over decision I made. I still am emotional over all the memories, but I now have two amazing, beautiful boys who I cherish everyday. I cherish them more because of what I went through. I have more patience because my children could possibly not be here. They are amazing boys! 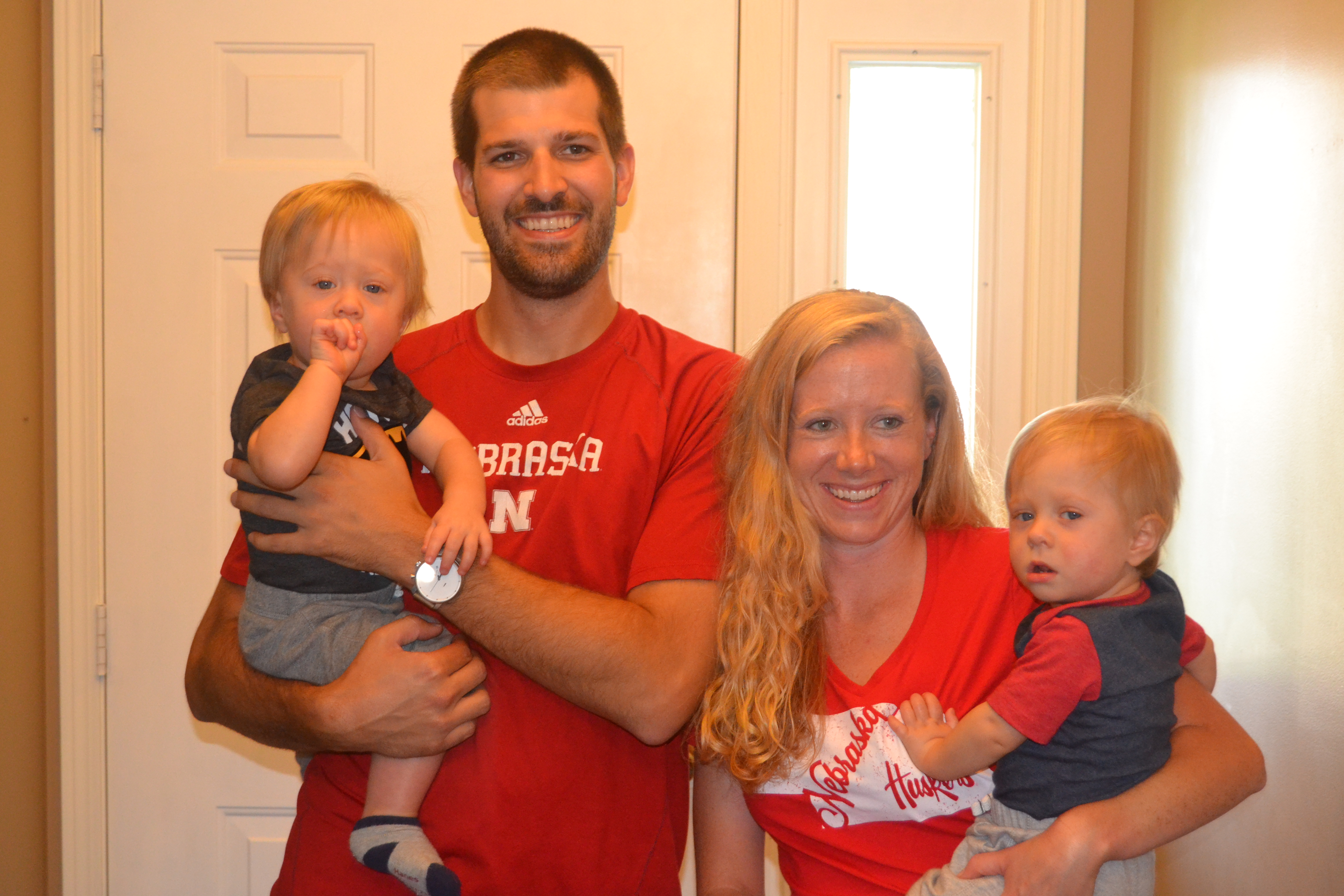 My name is Anna and I live in Nebraska. I have identical twin boys. Our favorite thing is to be outside with our two dogs.