My Son Reminded Me To Find The Good

Published by Jacque Gorelick on January 25, 2018 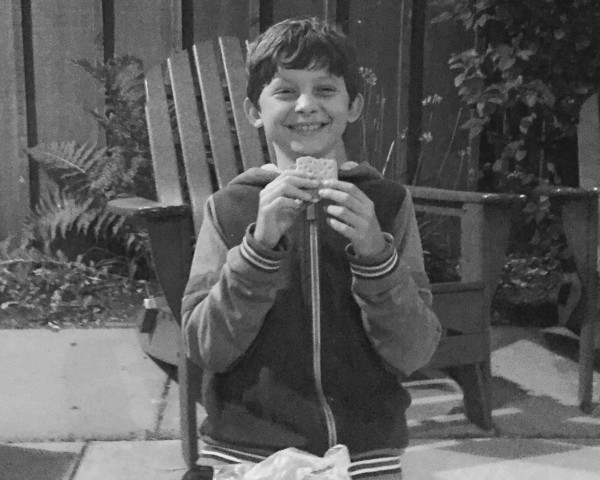 With the lazy days of vacation winding down, my almost-fifth-grader and I went away overnight, checking off his last “Bucket List” item: alone time with Mom.

During our 24 hours free from wifi, little brothers, and distractions, we covered some territory; and I don’t mean our long walks on the beach.

What happens when we die?

What are nuclear weapons?

How fast does a rocket go?

What happens when I die?

What about nuclear weapons?

Will my kids be safe? With their bodies, their choices, other people’s feelings?

How fast will this next chapter of life go?

In our time together, I realized we’re both searching. For answers. Reassurance. And the next sure footing to place our weight on, and step forward.

He in his 10-year-old way. And me in my mother-wife-almost-middle-aged-woman way. Nevertheless, we're both searching.

I took him to the beach. Because we both like open space, starry skies, and s’mores.

I drove us down streets where I learned to drive, playing songs I came of age to, drinking familiar coffee that sustained me. We entered neighborhoods I hadn’t driven through in years. Still, I knew where to go. Without cell phones, or Google Maps, or even conscious thought.

I took him to the cafe I used to frequent in the days when I had to scrape together coins to buy a coffee. Unlike so much else from then to now, it was exactly the same.

We walked in and noticed an old man sitting at an even older piano, playing choppy, drawn out notes, fumbling to find keys. Pencil marks overflowed from the margins of his sheet music. The song he played took every last bit of concentration he had. After three years of piano lessons, my son understood the effort being made to get through this one song. He looked at me and held my gaze to tell me so; eyes filled with kindness, not judgment.

We got our drinks and sat across from the piano, where I used to sit – when I was young and unsure about pretty much everything, except who I was inside.

Panning the room, I noticed that while the barista’s personal attention was top-notch, and the deep wooden benches begged for conversations to take place, hands to clasp under tables, and secrets to be whispered; every single person was staring at a screen.

No one was talking to each other.

I started to go down the rabbit hole of worrying about a future where we trade human connection for anxiety, insomnia, and depression. While my head was filling with dystopian imagery, the last shaky notes from the keys rang through the room, and my son started applauding. He hadn’t been looking around the room assessing the screen time of others. Or staring out the window wondering why I’d brought him to this old, rundown coffee shop. He’d been watching as an old man, hunched over keys, found the notes to a song, and played them for a room full of people, who weren’t even listening.

Except my son was.

The man turned around, surprised, and they shared a look. Filled with recognition, appreciation, and human connection.

He turned back to the keys in front of him and placed his sheet music on top of the piano, in a pile of other song books stacked next to his tip jar.

He closed his eyes as his fingers began to play the notes of the next song. It was like watching him find a memory he knew to be sure and true. The kind you don’t have to question, you just feel.

Complex and beautiful music filled the room as his weathered fingers danced across the keys —effortlessly.

Sitting with the ghost of a younger me, I watched my someday-grown-up-man embody the belief that everyone deserves to be acknowledged and seen. I watched him clap when no one else did, and lock eyes with a surprised old man who then found his way to a song he’d forgotten he knew.

And for a minute, he reminded me of myself, sitting in the same place, not much older than he is now. Before time propelled me forward. Before people stared at screens instead of talking to each other.

Some days it’s easy to see the worst in us all. Some days the ugliest of humanity is on full display all over the news.

So we must shine our light on the good. When my son applauded for the man at the piano, every person in the room looked up from their screens and joined in. In one simple act, smiles and clapping hands united us. Strangers.

An amazing thing happens when we close our eyes, toss out the sheet music, and embrace all that connects us. It’s not something you question; it’s something you feel.

What if, like my 10-year-old, we looked around us and remembered to find the good?

Jacque lives in California with her two boys (lively), two dogs (rescues), one cat (indifferent), and her husband (patient). She is currently working on a memoir. Her writing can be found on Scary Mommy, Popsugar, HuffPost, and more. You can also find her at her blog, writewhereiam and on Facebook and Twitter.

My Son Reminded Me To Find The Good
Where do we go from here?
About a Boy
advertisement

My Son Reminded Me To Find The Good
Where do we go from here?
About a Boy