My Kind of Guy

Published by maureen stiles on November 3, 2018 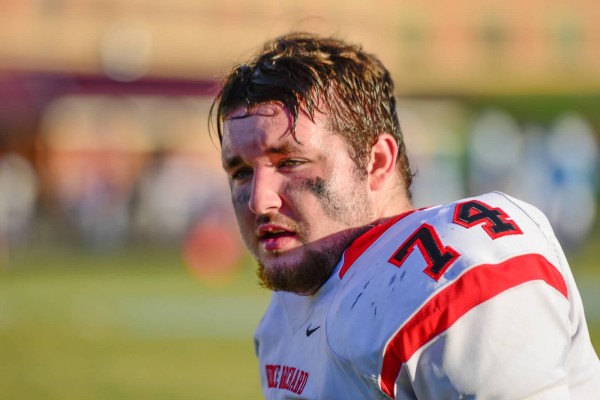 My sister peered into my son’s face as he lay snuggled in his infant carrier. Only weeks old, he never fussed even when confined to a car seat for hours as we shuttled his older brother to and fro.

She looked up at me and said, “He is an old soul. There is something special about this baby. He has a light.”

At the time, I brushed it off because, well, of course he was special. He was mine.

As the years passed, however, it became apparent that he did indeed have something rare.

Strangers stopped and stared at him. Animals and babies were instinctively drawn to him. He was slow to anger and quick to forgive. He loved fiercely and felt deeply for others.

He was kind. To the core.

As a mother, of course, this warmed my heart. But the rest of the world was having no part of it. Because this sweet soul was big. A gentle giant of sorts.

With one look at his stature, people assumed he would be rough and tumble. The first guy coaches wanted to anchor the offensive line and the one who looked like he could squash you with his massive hands.

Except he wasn’t that kid.

He did not have an aggressive bone in his body. He has played football for years and made every coach crazy with wasted potential. Although he embraced the mechanics of tackling, the reality of slamming someone into the ground held little interest.

He was the B team in every sport and while he sometimes showed a flash of disappointment at this placement, it was primarily because he desperately wanted to be with his friends on the A team. He compensated by attending as many of their games as he could and cheering wildly. His impressive size 13 feet paled in comparison to the size of his massive heart.

As our middle child, sandwiched between two highly aggressive, athletic brothers, we worried about him.

We struggled with the desire to change him. Toughen him up. But if we did that, it meant we were projecting stereotypical expectations on him just like everyone else. So, we did nothing.

Which, as it turned out, was the hard road. We stood by as he was misunderstood by peers and adults alike. Classmates picked on him at school because they knew he would not fight back. He came home many days upset and confused.

How do you explain to a child that sending kindness into the world doesn’t necessarily mean kindness boomerangs back around? Big lessons for little hearts.

And then an amazing thing happened. The outside world caught on.

As he got older, girls began to appreciate his sweet nature. The boys saw the value of a loyal friend. And coaches and teachers recognized his positive attitude and team spirit.

Today, his room is filled with trophies, paper plate awards and accolades attributed to his intangible contributions to countless sports teams and organizations. He is beloved by all lucky enough to know him.

And when he leans in to give me a peck on the cheek before he heads out the door, my loveable 17-year old looks me right in the eye.

And there it is, still. That same light my sister saw in his infant face all those years ago. I say a silent thank you to God for giving us the wisdom to let it shine.