It seems like everything in this house is stained.

The dining room table has been streaked in a rainbow of permanent marker for months, maybe even years. I've tried to remove it, scrub it clean with a number of cleaning products and mom hacks, but all that's come off is the finish.

The couch that has been sitting in our house for less than three weeks has already been marred with ink stains and Sharpie scribbles. And although I knew it wouldn't be safe for long, I had hoped to keep it blemish-free for at least a month, maybe two.

And after noticing fresh smears of marker on the wall and muddy shoe prints on the carpet, I'd had enough. 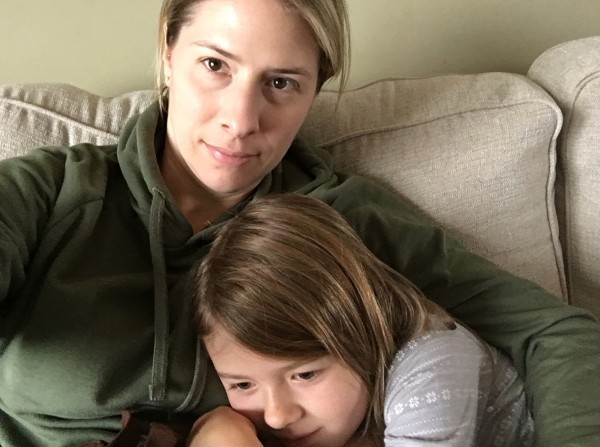 It was easy enough to brush off frustration after seeing the first stain or two. But after the discovery of each subsequent stain, my blood pressure shot higher, the color of my face deepening to a more frightening shade of red.

So, after I put the youngest down for a nap and gave the oldest permission to watch a movie, I headed for my bed, figuring a few minutes of quiet rest would help bring me down from the dangerous ledge of irritability and frustration.

But just moments after rising from my short nap, I was right back on that ledge. My daughter tiptoed down the stairs to show me her twice-worn flowery leggings, Silly Putty adhered to the fabric like gum. I scolded her only to be met with a shoulder shrug and a comment about how her pants weren't “THAT new.” And after noticing that Silly Putty was also adhered to the three-week-old couch, well, I dove right off the ledge.

The next few minutes were a free fall of harsh and inaccurate words. I ranted and raved about how my daughter doesn't take care of or appreciate anything she's been given. I yelled about how sick and tired I am of her carelessness. I accused her of being disrespectful and irresponsible, and I mistakenly used a series of “always” and “never” statements.

And as the tears ran down my sweet girl's face, I realized that not ALL of the stains in this house were caused by careless little hands. No, my big mouth was at fault too.

While I watched my daughter crumble, the tears pouring from her eyes, her face buried in her hands, it became clear that a mouth unrestrained holds far more power than those messy little hands ever could. And I was instantly aware that my destructive words are powerful enough to seep into the crevices of my children's hearts, leaving stains that are far more damaging than permanent markers or gooey substances.

I realized that in order to keep my mouth from blemishing their hearts, my own heart needed to be cleaned out. It needed to be scrubbed in a concentrated solution of gentleness and humility, shined with kindness and grace, and coated in a thick layer of forgiveness and self-control.

So I spent the remainder of the afternoon on our stained couch with my daughter, her head in my lap as I stroked her hair. I set the damaged leggings aside and resolved to clean up the mud later. And then I apologized.

Because the most fragile thing in this house isn't furniture or flooring or fabric, it's my children's hearts. And without removing the stains from my own heart, the damaging words that flow from my mouth will most certainly leave permanent stains on theirs.

(WARNING: This WILL make you laugh. Hard.) "How to Torture Your Parents in Quarantine: A Maniacal...
Fireflies
The Blue Stain
advertisement

(WARNING: This WILL make you laugh. Hard.) "How to Torture Your Parents in Quarantine: A Maniacal...
Fireflies
The Blue Stain