My first glimpse of my parents as grandparents… came with my dog.

If I’d ever actually had doubts about that (which I didn’t), they most certainly would’ve been alleviated when I brought home their first “grandchild” – the granddog.

I got Wahoo, a little Lhasa Apso, when I was only 19, still practically a baby myself. Ironically, getting Wahoo was one of the few overt acts of rebellion in my entire life (I was away at college and my parents told me not to get a dog).

Due to my defiance, my dad initially pretended not to care about the dog, but she was the cutest little piece of fluff any of us had ever seen. We could all see him quietly petting her when he thought no one was looking.

Then talking to her when no one was looking.

Then cuddling her when no one was looking.

And now? Now Wahoo is fourteen and takes her naps on the white, formal living room couch with my father.

It’s a well-known fact that parents completely change when they become grandparents. There is no trace left of the rule-enforcing, healthy-food-feeding, screen-time-limiting parental units that raised you when they are interacting with their grandchildren.

As it turns out, the same is also true for granddogs. 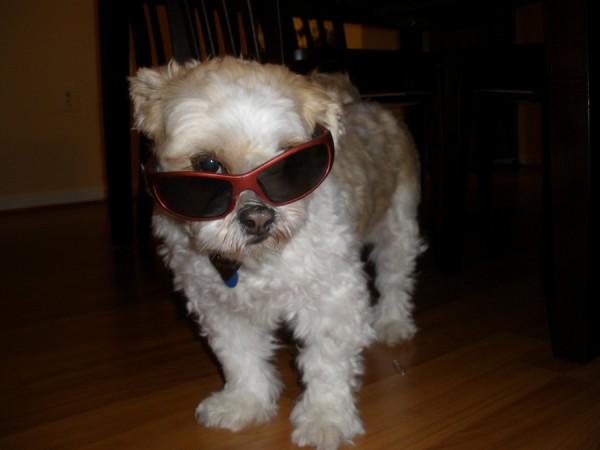 When my parents would stop by a craft fair or a fundraiser, what would they purchase? New bandanas and collars for the granddog.

When Wahoo went to be spayed, and I called to tell my mom the procedure went fine, she said “I know. Your dad already stopped by the vet’s office just to check on her."

Wahoo has amassed quite a stockpile of toys over the years. 90% of them were purchased by the grandparents.

Growing up, our family dog, Sandy, was never allowed upstairs. She was always confined to the main level.

But the granddog? The granddog has had free reign of the house from Day One.

Wahoo sleeps in my parents’ bedroom.

As Wahoo aged and her back started to bother her, my parents bought little steps to help her climb on and off of their bed.

Now that Wahoo has aged even further and can no longer handle the staircase, my father carries her up and down them.

If dogs could do artwork, I’m certain Wahoo’s would be plastered all over my parents’ refrigerator.

Fourteen is pretty old for a dog, even for a small breed. We know we’re nearing the end of our time with Wahoo. She’s moving more slowly, her vision is going—getting old is tough.

It’s hard to think about what we all know is coming. But whether we have weeks, months, or (hopefully) years left together, she’ll always be my first baby.

And their first grandbaby.

Living in the Sub-points
Meet THE DIMMELS - And Our Not So Normal Summer
Grandparents Day: A time to keep memories alive
advertisement

Living in the Sub-points
Meet THE DIMMELS - And Our Not So Normal Summer
Grandparents Day: A time to keep memories alive